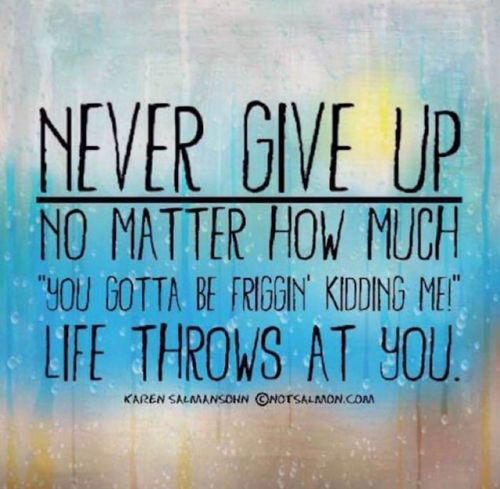 After several tests and biopsies over the last four weeks, I’ve unfortunately been diagnosed with stage 3 rectal cancer. For those who understand these things it’s T3N2. After having my colon removed in 2004, I only had about 8” of rectum left. I should’ve had what my surgeons refer to as a ‘rectal stump’ scoped every year, but I got busy and distracted taking care of my kidney disease for the last two years and neglected stumpy. Keeping myself alive has become a full-time job. Short Bowel Syndrome means I have a high output ileostomy and requires me to infuse IV fluids six hours a day and nine hours of IV nutrition nightly. Despite having a left nephrostomy tube changed every 8 weeks, I still have countless kidney infections. Each one further damaging the kidney permanently (My right kidney was removed in 2013). Kidney disease caused high blood pressure, so I take medicine and check my blood pressure a couple times a day.

I almost made it through an entire calendar year in 2018 without a hospital admission until a kidney infection earned me a four day stay in Akron General a week before Christmas. Silly me, I thought my health was beginning to stabilize. My kidney problems were so bad I missed my 2017 mammogram. I usually have two per year. My Chart kept reminding me I was overdue for the mammogram. Unfortunately, it did not remind me about a scope of the rectum. I feel foolish. I had several CT scans, including one in December 2018 that were all clear.

I’ve had an ileostomy since 2005. That means I poop in a bag on my belly. I call it a ‘crapsack’. I simply forgot about the few inches of rectum I was no longer using until a couple months ago, but I still didn’t call the doctor and ask for a scope until I started having problem a few weeks ago.

Last year The American Cancer Society lowered the screening age of people who are at AVERAGE risk of colorectal cancer from 50 to 45. I’ve been begging my friends and former classmates to get screened while ignoring my little rectal stump. So, so, so stupid. I don’t know how I could’ve forgotten until now. But I cannot look back I must look forward.

I kept this diagnosis mostly to myself for the last 4 weeks, so I could deal with kicking myself in the butt for forgetting. I’ve sat for hours staring at the wall, completely numb, and wondering how this could be happening again. Surprisingly, I’ve shed no tears. My sister-in-law and a few close friends have done enough of that for me.

My doctors at the Cleveland Clinic recommended the standard protocol of radiation, chemo and surgery. This is complicated because I’ve already received a life time supply of radiation to the pelvis. Chemo therapy NEVER helped me. I grew new tumors several times while on chemo. I’ve known for a few years that my bladder, vagina, and rectal stump are all fused together. Melted, burned, and scarred from the radiation I received in 2006. After the MRI I had last week in Cleveland, I’ve been informed the rectal stump is also fused/melted to my spine.

I had so much radiation I spent 4 months the summer of 2017 receiving hyperbaric oxygen therapy to treat radiation cystitis. I had to drive, 45 minutes each way, to sit in a pressurized tank receiving pure oxygen because blood clots the size of a baby’s fist where coming out of my urethra. That was a pain I wouldn’t wish on Satan himself. I couldn’t believe the radiation I received 11 years prior was causing that much pain.

I’m baffled by the world renown Cleveland Clinic recommending radiation when I’ve already had so much, chemo that has never helped me, and a surgery that will be a nightmare for both the surgeon and me. I asked the surgeon “Do you even think you can do this? Will it be successful?” His answer “It will be difficult. Several other teams will be involved, including, at least, urology and gynecology.”

I’m so disappointed and frustrated that he didn’t even send the biopsy for biomarker testing until I asked him to do so. There are new targeted immunotherapy drugs available now that didn’t exist when I had cancer in 2004, ‘05, ‘06, and ‘07. I asked him about pembrolizumab (otherwise known as Keytruda on all the commercials you’ve likely seen). He said it’s for stage 4 and insurance wouldn’t cover me because I’m stage 3. He said he wants me to get the best care possible but says maybe that’s not at the Cleveland Clinic.

For those of you who don’t know or don’t remember, my first two surgeries were at the Cleveland Clinic. After surgery I started chemotherapy. While on chemo, new tumors grew. The Cleveland Clinic said there was nothing more they could do for me. I was REALLY close to dead. I went to the University of Pittsburgh Medical Center (UPMC) for the cutting-edge surgery that saved my life. It was only being done in six hospitals in the country at the time and the Cleveland Clinic wasn’t one of them. There were zero hospitals in Ohio doing the HIPEC surgery.

I was diagnosed with ulcerative colitis when I was 17. When I graduated from college and moved to Ohio, I found a GI at the Cleveland Clinic to help me manage the UC. After years of prednisone, pain, blood, and not being able to eat much of anything, I made an appointment with a surgeon at Cleveland Clinic. I asked her to remove my whole colon and give me an ileostomy. I was 25 at the time. She said my insurance wouldn’t cover the surgery, that I was “too healthy” to have it removed even though I was miserable and had a STRONG family history of colon cancer. Oh, how I wish I would’ve gotten a second opinion then. I was diagnosed with stage 4 colon cancer at 30. But I can’t look back. It does me no good now. I must look forward.

I emailed the great Dr. Herb Zeh who saved my life in Pittsburgh. Even though he’s in Texas now he suggested I get a second opinion with my brother’s oncologist in Pittsburgh. Yes, you read that right both my brother and I have colorectal cancer. Our parents must feel like they’ve won the shittiest lottery in the world.

I dread telling everyone this news. It’s not easy to admit my mistakes. It's not easy to show vulnerability. Cancer is a real downer. Cancer is no fun. I hate the attention in brings. I especially hate the pity. I do NOT want to hear “you’re so strong” or “one of the strongest people you know” or any version of that because that’s too high an expectation. I don’t want to be one of the strongest people you know. Because when I have a down day and fall apart doing the ugly cry I feel like I’ve failed you. If you say “You got this” or “You beat it before you can do it again,” I may punch you in the face. This is NOT a “fight” and not something a person can beat. When you use those terms, you make winners and losers. There are no winners and losers in cancer. Cancer is a marathon. It is something you endure. When I die, I want my obituary to say, “She finished the race.” Not “She lost the battle.” I’ve come to love many people with colorectal cancer over the last 5 years since becoming part of The Colon Club. Three of them were featured in the 2015 Colondar 2.0 magazine. One of my dearest colorectal cancer friends, Chris Ganser, finished his race last year. Chris didn’t lose. The world lost Chris.

I believe in God. I believe he sent his one and only son to Earth. I believe that Son willingly sacrificed himself so the gates of Heaven would be open to any and all when chose to follow him. I’m a sinner. I’m not a nice person. My body may betray me but my soul has been redeemed. But I believe there is a place in Heaven for me. I don’t think finishing my race here on Earth and taking my first breathe in Heaven is a loss, but I’m just not ready to do that yet. I'm not ready to give up.

A new leg of the race is just beginning for me. If you are a praying person, please pray for healing, for the best team of doctors to be available to me, for insurance to cover the best treatment available, for patience, for endurance to run this race, for wisdom and peace and for my family. You don’t have to tell me you are praying.

Please go get screened. The best thing you can tell me is, “I got a colonoscopy because of you.”

God blesses those who patiently endure tests and trails. Afterward they will receive the crown of life that God has promised to those who love him. James 1:12

Leighann Sturgin is a stage IV colon cancer survivor, writer for The Colon Club’s annual magazine, On The Rise, and Kimberly Fund Manager. She was featured in the 2015 Colondar 2.0. She lives in Wooster, Ohio with her husband Todd and teenage sons. You can reach her at leighann@colonclub.com, or @littlesturgin on Twitter, and Instagram.