Meet Our Board Member: Meggan Mikal 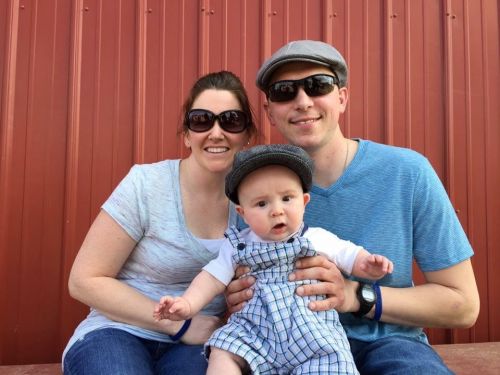 My name is Meggan Mikal and I am pediatric palliative care nurse practitioner. I journey with patients and their families through the toughest of diagnoses, including disease-related pain and symptoms. I sit with them as they receive good and bad news, including conversations leading up to the last breath.

As I reflect on the work I do, the word embrace takes on a much different meaning. One of the favorite stories my husband Andy and I loved to share, was how we met. I am forever grateful to my mother-in-law, Joanne for introducing me to the man of my dreams. Throughout my undergrad I worked as a patient care tech on the same hospital floor as Joanne. I begrudgingly agreed to share my email with her after she thought I would be a good fit for her son. After a few weeks of emailing over winter break, we agreed to meet in person. He walked into my college apartment wearing what we soon would refer to as his “white snake jeans”, brown trucker shirt, and black shiny shoes. Obviously, it was not his wardrobe that won me over but his calming and reassuring voice.

It was that same voice that asked me to be his girlfriend on February 2, 2005, his fiancé on June 1, 2009, his wife on September 18, 2010, and rejoiced as he shouted, “It’s a boy!” on October 20, 2016. It was his voice I heard as we shared many adventures. Throwing pennies in the Trevy fountain in Italy, drinking wine in California and Guiness in Ireland, eating olives in Greece, ziplining in Costa Rica, hiking Denali trails in Alaska, visiting ground zero in New York, dancing at Señor Frogs in Mexico, touching the Golden Toe (he did) in Croatia, skiing in Colorado, proudly wearing our Chicago Blackhawks gear while visiting Boston, and cheers-ing in unique breweries all across the US.

Andy, my strong, funny, fierce, cool, calm, and collected husband, was diagnosed with stage 4 colorectal cancer in January of 2017. To say we were in shock is an understatement. I kept reviewing the timeline of events. He had back pain from golfing 36 holes 3 days in a row in May but clear x-rays. He pushed through 6 weeks of physical therapy and later an MRI which showed herniated and bulging discs. We thought we had our answer. He was constipated from the pain meds. The blood in his stool was from his hemorrhoids. In medicine, you could call it the perfect storm of events. It was three months after our son Andrew was born, hence the rationale for his fatigue.

I read that 67% of those diagnosed with colorectal cancer saw at least two healthcare providers before being diagnosed. We saw four. When Andy’s journey began, doctors thought his herniated and bulging discs were the source of his pain. It was not until efforts to treat the discs were unsuccessful and the pain started to increase severely, that he underwent additional testing. This resulted in discovering cancer. Andy immediately began aggressive chemotherapy.

Empower: to give strength

In my professional role, I am passionate about empowering patients and their families to ask for what they need, to think about their goals, and to let them know that hope is always alive.  My husband brought that home for me. Despite the severe pain, emergent ostomy placement, infection, and time in the hospital, Andy fought hard to remain the most optimistic, energetic, and passionate person we knew. Prior to his diagnoses, Andy left corporate America to begin his dream job as an assistant brewer at Rock Bottom Brewery and cancer did not stop him!

Andy embodied a character fitting of a hero. He NEVER once asked why him. He stated the opposite, that he was thankful it was not one of his brothers instead. He truly encompassed qualities that almost seemed surreal and even in the harshest moments of his dark reality, that is who he stayed. His character was strength wrapped in kindness.  Those attributes and an authentic soul are what real superheroes have in their DNA. Cancer never stole them. Andy wouldn’t let it, and I get to tell our son his dad was a superhero.

Many who knew my beloved husband were privy to the fact that he made a damn good beer. However, I believe his greatest accomplishment was becoming a father. He gave life to one of the coolest kids we have ever met. Though my heart is full of our adventures and traveling together, the daily reminder of Andy is our son, Andrew. He is his finest gift of all.

Andy died September 13, 2017, eight months after being diagnosed with this horrible disease. A saying Andy used that will forever stay with me was from Bob Marley. It was “Evil never takes a day off. So, how can I?” He dealt with unimaginable adversity as a true warrior, followed his life passions and goals, and accomplished them with grace. I cannot say that I am not lost, confused, angry, and sad. I will say that Andy would want us to harvest good just like he harvested his hops.

I miss his daily Seinfieldisms, unique movie quoting, calm demeanor, protective nature, his reassuring hand on my shoulder, telling me the sun will shine tomorrow. Most of all I miss his voice.

Never in a million years did I think my career would help guide me through my darkest days. It did not make it better, but I came back to work with a new understanding of what my patients and their families go through. Yet another gift from my Andy.

The loss of Andy taught so many that the brevity of life is all too real. The amount of time our bodies will breathe air on this earth is indeed limited, unknown, and should never be taken for granted. Andy knew that already, he lived and loved that way.