Anita Isler was the featured survivor for April in the 2007 Colondar. She is a well-known advocate in the colorectal community, continuing to raise awareness and providing support. The Colon Club caught up with her to ask about Dress in Blue Day, a day of awareness for colorectal cancer that Anita started locally which has become a nationally recognized day.

Tell us a little bit about your story and your journey into advocacy.
I got involved with advocacy accidentally. When I was diagnosed with stage IV colon cancer, they had me meet with a genetic counselor due to my family history. After asking to bank my DNA, the counselor suggested I reach out to The Colon Club because she thought I would be a good story for the “Colondar.” I joined The Colon Club and reached out to talk to Molly. I had just missed that year’s application cut-off.  I ended up going to the CCA conference that year and later joined our state colorectal cancer task force. Little did know I was going to become an advocate.

How did Dress in Blue day begin?
I came up with the idea for Dress in Blue Day at a task force meeting. At first, the task force didn't really understand it. I said I was doing it anyway because it was free and a way to get the message out to people that colon cancer could happen at any age. I was the third parent diagnosed at our school under 50, so I knew it was important. One of my best friends at the school passed away at 37 years old 7 years earlier. I didn’t know the symptoms or anything about colorectal cancer. I was not aware of my family history, or that I needed earlier screening because my dad passed away in his mid-forties. This was a way to start the conversation.

How did you grow this local event into a nationally recognized day?
I sent a note in my school newsletter with some simple guidelines about screening and asked the kids to consider wearing blue for Dress in Blue Day. I picked a day in March since it was our awareness month. I called the paper and they came out and took photos of me with the kids. My story went to thousands of viewers rather than just the 500 school families.
The next year I did it in honor of my friend, Carmen. She was picked to be in The Colon Club’s 2007 Colondar with me but passed away before the photoshoot. We also added Mayoral proclamations and students brought in a dollar, which was donated to The Colon Club. Public health became involved and participated as well.
The third year of Dress in Blue Day, I took it to my small town where I grew up. They wrote a big article and had my year’s Colondar on display for sale in a store. I continued expanding Dress in Blue Day and was approached by the Colorectal Cancer Alliance. We agreed to partner and launch Dress in Blue Day on a national level. I did a webinar for them, and now Dress in Blue Day is a nationally observed day like Donut Day or Grandparents' Day!!!!

How does it feel to spark this beautiful day of awareness?
It makes me happy to see blue everywhere for colorectal cancer awareness on the first Friday of March every year. Knowing about symptoms, screening, prevention, and the unexplained rise in diagnoses of people under 50 makes a big difference in helping fight this disease. The fact that more people were not talking about it was crazy.

What made you decide to start the Colon Cancer Stars?
Our colon cancer task force decided to start a non-profit for colorectal cancer. I wanted to be a support to the newly diagnosed and help them find the resources like The Colon Club, Colorectal Cancer Alliance, Fight Colorectal Cancer, and Colon Cancer Coalition. Someone else was going to do the lead/grant writing, and I was going to be the program person. Unfortunately, that person took another job, and I ended up on my own. It was not something I would have ever planned to do with my limited background, but I am proud of what we have accomplished. Through creative ideas, peer-to-peer groups, in-person support, and assisting the newly diagnosed, we have touched many lives. I have kept early onset colorectal cancer on my state's agenda even when no one would listen.

In what way has The Colon Club impacted your advocacy work?
Like Molly, founder of The Colon Club, I will continue to push this message. It is sad to me that it took overwhelming data for others to notice the young population in the colorectal cancer community. I have always believed you need to educate everyone about symptoms and history no matter the age. This knowledge may help people push for testing earlier, prevent late stage diagnoses, and provide resources immediately for the newly diagnosed. The Colon Club has the data, now we need to find out why younger people, including children, are getting colorectal cancer.

Thank you, Anita, for spending a few moments with us to share more of your story! 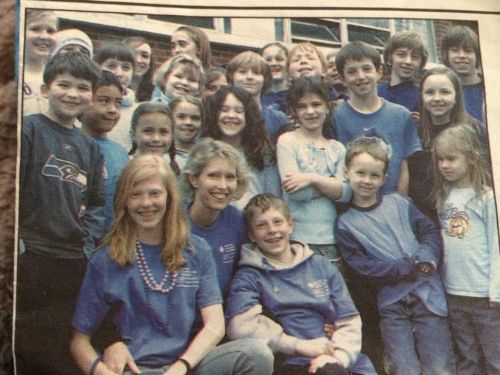