I don’t often speak about the extra weight I carry. It has been an invisible, cumbersome, massive weight that I have been dragging around 24 hours a day of my life for the last 29 years. I have learned to conceal it for fear of sympathy or being labeled the ‘sick girl’. You may catch glimpses of it occasionally with a fleeting moment of extreme confusion or hear a vibration that is meant to only alert me or see me with a drop of blood.

I have been a type 1 diabetic for almost 29 years, but it is not who I am.

My mom was diagnosed with colon cancer when she was 44. She lived a very hard life both emotionally and physically: she had progressive multiple sclerosis. As I grew, I watched her struggle with losing her capabilities, no matter how hard she fought for them. By the time she was diagnosed with colon cancer, she had already lost her ability to fully walk on her own, she couldn’t feel the left side of her body, and she couldn’t use her left hand, just to name a few. She struggled every single day. My dad had passed away unexpectedly two years prior to her colon cancer diagnosis, and she was still new to widowhood at that point. When I was told that she had colon cancer, I was on the verge denial. How could she have both M.S. and cancer on top of everything else? My teenage mind swore that having both violated some kind of unspoken rule of a divinity.

My own diagnosis of colon cancer at 29 had also violated that rule that I was sure was out there somewhere: I had now had colon cancer and type 1 diabetes.

In August of 2015, as I was sitting in a conference room being informed of my new cancer diagnosis, cancer took ahold of the weight that diabetes had grasped so tightly to for so long. Thoughts were running through my head: How was I supposed to carry both? What would diabetes mean for treatment? What even were treatments for 29 year old colon cancer patients? How was diabetes going to limit it? What if some part of being diabetic hindered my chances for a successful treatment?

Being diabetic for so long, I am aware of how the fluctuations of moods can affect my blood sugars and have found it advantageous to control those feelings and bring myself into a calm reality, which has really turned into a saving grace for many instances in my life. I settled my mind and decided not to cross any of those bridges unless we got there. But diabetes kept poking its head out from behind the weight of now colon cancer….but what if….

At the time, my blood sugars were well controlled which meant, amongst a million other things, that wounds healed well and quickly (a risk that always runs with diabetics). I was diagnosed as having stage IIA and the treatment was a hemicolectomy. Because I tried to keep my blood sugars as normal as I could, I was able to heal well and quickly. The MSI of my tumor was high, which meant no chemo, but it also meant another violation of one of those divinity rules that I used to think was out there.

My oncologist wanted me to have a second opinion because I was young and brought a few different variables to her office. As I was leaving the second opinion appointment, I was on cloud nine because he confirmed that I was most likely cancer free. I thought I would never have to hear the word cancer ever again. I was beyond happy and very relieved to be done with it. Take that, violated rule.

In present day, 5 years later, I have learned how to control my anxiety better. I have learned to take each scan/biopsy one at a time. I have learned to try to keep myself in the healthiest version possible just in case cancer rears its ugly head again and to prevent diabetic complications as much as I am able to. Because issues with one can definitely lead to exasperated issues in the other.

A lifetime ago, prior to cancer, I found myself on a social media thread where someone had once told me: “well, I don’t know why diabetes is even an issue – it isn’t like you have cancer.”  This person had never experienced either personally. Diabetes has come close to killing me and cancer sure did try. From my standpoint after 29 years of being type 1 diabetic, one is not ‘better’ to have than the other as they are both life threatening and come with their own individual challenges. Quite frankly, I wish I would have never had to deal with either, but I have had to learn to carry the weight of both.

One of my biggest fears is one day having to choose between diabetes, cancer and primary biliary cholangitis (another autoimmune that was found after being screened for Lynch). I haven’t quite yet figured out how to manage that specific fear other than trying to quiet my mind and not to cross that bridge unless I get there. Cancer is always looming over my head, just as diabetes is always in my face. Cancer is there in the scars of every surgery I have had for it or for possibility of it, it is there in the 12 doctors I see, it is there in the never ending screenings I have. It is permanently fixated to the back of mind with chances and risks always overhead, but I do find that it is more so functioning in the background these days.

Diabetes is also always present for me. It’s present in how I plan my day, in the constant small decisions I make (the average person with type1 diabetes makes 300 more decisions a day than someone without). Diabetes is there every time I try to read (or guess the nutritional value) of every single thing I eat, and in the middle of the night when I wake up hallucinating. It is there when I have to wait in the parking lot after grocery shopping because my blood sugar is too low to drive, and in the times I forget to give myself insulin and my muscles become so cramped it that it is hard for me to do anything. They both show up together all the times I worry what will happen when the potential of cancer and diabetes to tragically intersect.

Diabetes and cancer however, have only made me stronger and made me more grateful as challenging as they may be, both together and individually. They are not me, but have helped to define me:

I am not type 1 diabetes, I am not colon cancer, I am not Lynch Syndrome: I am, however, a survivor in every sense of the word. 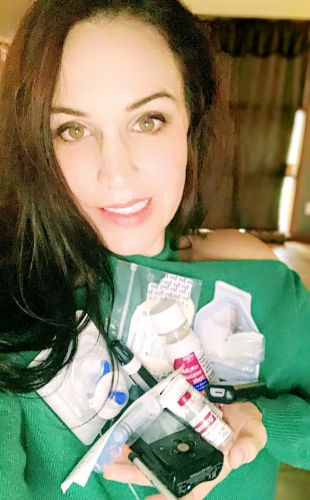