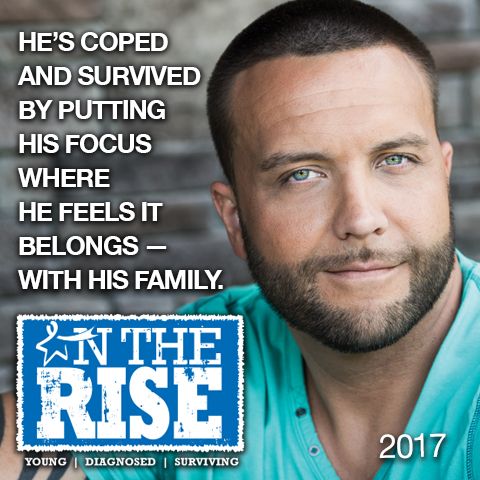 My name is Rob Vite. I am 37 years old. I am a five year colon cancer survivor, and this is my story:

I grew up playing sports, but I lived for football. It was my passion, release, fight and glory. As an athlete, football taught me how to connect with my body. When I started experiencing symptoms such as severe abdominal pain, dizziness, fainting, and lost of appetite. I knew something was not right.

After seeking medical care, I was diagnosed with Colon Cancer on May 17, 2014, at the age of 32.  Coincidentally, that day would have been my mother’s 53rd birthday who unfortunately passed from Leukemia in 2011. The diagnosis of colon cancer was extremely unexpected, shocking, and scary for me and my wife. We were in the process of growing our family not preparing for cancer. At that time of my diagnosis, we had a precious 3 year old daughter, Kennedy, and my wife was 5 months pregnant with our daughter, Harlow, making the diagnosis even more terrifying.

On May 29, 2014, after 6 hours of surgery, my surgeon reported to my wife that the surgery was successful and he felt confident that he had “gotten it all!" Though it turned out to be a very sizable tumor, it was very isolated, and the cancer cells did not spread to any of the 70+ lymph nodes that have been tested nor my appendix as we feared.  It was determined that I had Stage 2 cancer. Further genetic testing resulted in the discovery that I had Lynch Syndrome which explained the onset of colon cancer at such a young age. With this new information, along with the sizable tumor that was removed, my team of doctors determined that chemotherapy would not be administered due to Lynch patients not responding to chemotherapy like non-Lynch patients.

Following surgery, I experienced a blood clot in my left calf which slowed my recovery dramatically. What was already a painful and exhausting process became ten times harder on me and my family. My wife had to give me injections of Lovenox twice a day for 3 weeks. I then had to get my blood tested a few times a week until we figured out a right dose of Coumadin. Additionally, I was in significant pain for a while and was told to rest by the doctors. This sedentary holding spot was very difficult for a life-long athlete.

In June, 2015 I had a colectomy surgery. In this surgery the doctors took some more of my large intestine and a few more lymph nodes.  The doctors left me with about 3 inches of a large intestine. Thankfully, this surgery was much easier than the first one, and the recovery did not include blood clots. I was able to rest and return back to my normal way of life within 2 weeks.

I quickly discovered I still had a long road ahead. My weeks were filled with doctor’s appointments and continuous preventative testing due to the Lynch Syndrome. As the worst was behind us, my family and I were beginning to feel extremely optimistic.  My focus during this process was not how I would beat cancer, because I knew that I would, but rather how my survival would impact my family.

In 2014, I found The Colon Club.  I used to read the blog at night when my wife was asleep.  It became a source of therapy for me. I applied for "The Colondar" which later evolved to "On the Rise" an annually printed magazine. I was featured in the 2016 magazine.  In 2017, I joined the Board of Directors for The Colon Club, and in 2018 I became the Activities Director for “Colon Camp”. This is a retreat for survivors and caregivers featured in the magazine each year held at the Five Star Retreat outside of Nashville, TN.

So why am I so active within this organization? The truth is, my experience as a featured survivor in the "On the Rise" magazine reaffirmed my purpose in this world.  It became my job to educate, inspire, and motivate people every day as a teacher in the classroom, as a coach on the football field, and with other colon cancer survivors and caregivers. The Colon Club gave me a mission after cancer.  I will always be indebted to this organization because it forever changed me.

Happy 5 years of being CANCER FREE to my entire family and friends because this has been truly a family adventure to say the least!  #ViteStrong #TheColonClub