Becoming a Mom After Surviving Colon Cancer by Danielle Ripley-Burgess 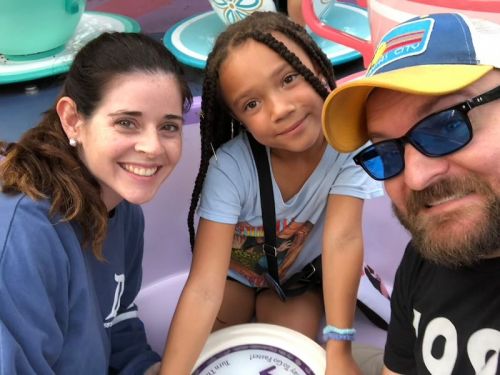 My story of becoming a parent after cancer actually starts at age 17. It’s not because I had a teenage pregnancy, but because it’s when I lost my fertility. We were all shocked, how could I be 17 years old and fighting colon cancer? It felt unheard of, especially in 2001 when young adult colorectal cancer wasn’t recognized yet as a concerning trend and phenomenon.

In the rush to save my life, a doctor told my dad after he inquired about fertility preservation, “We cannot worry about future lives, we’ve got to focus on saving hers right now.” Although we didn’t have time to harvest eggs, the doctor performed an ovarian suspension prior to starting radiation. This preserved hormones in my ovaries and gave the option to start a fertility conversation (assuming I’d survive) years later.

I did survive the cancer despite it being stage III. And many years later, I was ready to think about parenting. I wasn’t interested in fertility treatments though. Personally, I’d had enough needles, shots and doctor’s visits for a lifetime. But more than that, I’d felt a calling and carried a desire to adopt as a kid, years before I ever got cancer.

I wasn’t in a rush, and neither was my husband Mike (who’d been my boyfriend and walked through cancer with me). But one day when the “baby bug” bit, we began looking into adoption options and learned there were a lot!

International, domestic, foster-to-adopt and private–it felt like a foreign language, but something about international adoption appealed to me. I began my research by meeting with friends who’d adopted internationally as well as a friend who worked as an adoption social worker. I thought I’d hear, “the sky’s the limit!” but what she said shocked me. There were some restrictions put on cancer survivors, and it varied country by country. Some countries didn’t let cancer survivors adopt at all while others wanted you to be 5 years in remission. The same went for international adoption agencies.

At that time, I had 5 years of “no evidence of disease” under my belt, and the restrictions weren’t a problem with the countries we were interested in. But soon, a second curveball came.

During a routine colonoscopy, doctors discovered a concerning polyp that turned out to be stage I colon cancer. Facing a second diagnosis didn’t only bring intense emotional and mental challenges, but it threw a wrench in our adoption plans. Although the prognosis was good and I only needed surgery, having “cancer” on my medical record again threw off our adoption timeline. I didn’t want to wait five years to begin the process, and then another two or three (or more!) of waiting.

We set the adoption conversation aside and I focused on getting better and recovering. By this time, doctors were highly suspicious that I had Lynch syndrome. I began a new, more rigorous follow-up plan, which left little time to think about starting a family.

The “baby bug” eventually bit again, and we began looking into other adoption options. I’d become more open to a domestic adoption and began searching online. I found a domestic adoption agency that didn’t appear to have a “cancer clause” dictating you needed five years without cancer to work with them. I inquired and had a phone call with one of their staffers who also happened to be a cancer survivor. Serendipitous!

He said they needed me to be one-year cancer free, and they also asked for a note from my oncologist stating I was medically fit and healthy to become a mother. He wrote it quickly and gladly for me!

FROM SLOW TO FAST

It worked to our advantage that we knew we’d either face infertility or adopt going into our marriage. We didn’t go through years of trying to conceive and the disappointment that followed. It didn’t mean the pain of infertility didn’t hit me (and still does to this day). But, knowing adoption was in our future helped us be on the same page.

I was sensing the time to begin the process was coming close, and, as a person of deep faith, I found myself praying. In my heart, I felt like Mike would know the right timing. A few weeks later, I asked him about it and he said he’d also been praying and felt God say, “September.” We were to begin the adoption process in September.

It was already September 14!

We had found our agency, so we sent in the initial paperwork that kicked off our adoption process. We figured the earliest we could have a child was May based on their expected timelines. We dove into getting our home study done (which was paid for thanks to a family building grant for young cancer survivors awarded by the Samfund). By the beginning of January, we were just about to go “active,” which meant a birth mom could view our profile and potentially choose us to parent her baby.

And then, we got a surprising phone call.

Close friends from our church knew of a potential adoption situation involving a baby girl being cared for by her uncle. They asked if we’d be interested if her family decided to pursue adoption. She was local, already born, and it would be an open adoption–nothing that we’d expected. She was biracial and I’d longed to have a transracial adoption, so we said yes and the whirlwind began.

We rode a roller coaster not unfamiliar to most adoption stories and faced common questions:  Did the birth mom choose us? Is this going to fall through? Is this really happening? Are we ready? But as each bend and twisty turn of events came, the details worked themselves out.

We received final confirmation–we were adopting this little girl–within a few weeks of the inquiry. Fortunately, our agency pivoted and helped reclassify us from a traditional domestic adoption to a private one. Social workers, lawyers, and appointments both for us, the baby and the birth mom, all fell into place. And three weeks after we’d been asked if we were interested, we brought our daughter home.

It gave me chills when I did the math and realized that our daughter was born that prior September, right when our faith had led us to start the process.

Today, we’re the proud parents of a nine-year-old girl who has considered us “mom and dad” since she was four months old. We enjoy an open adoption and have become very close with her birth family. Together, we’re all proud of our daughter and the young woman she is becoming.

Although I feared my cancer would be seen as a negative or threaten the birth family, they actually saw me overcoming the challenge of cancer as a strength— one we all hope is passed down to our daughter.

More about adoption from Danielle!

Read posts tagged #KneetoKnee on Instagram this month for personal stories from all points of view along the “adoption triad,” (the birth mother, adoptee and adoptive parents). Tune into my Facebook Live on Nov. 13, 2019 where my friend Nikki, an adoption social worker, will answer common adoption questions about adoption and anything else you want to ask her in real-time. Sign up now!