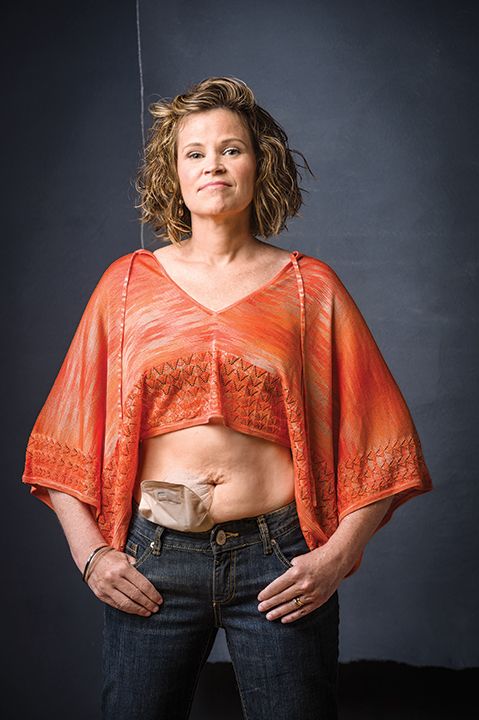 Wendy’s father first went through treatment for colon cancer when he was 48. His treatment was successful and he was cancer-free for over 15 years. However, in 2010 her father died of colon cancer. It is unknown whether the cause was a recurrence of his previous cancer or a new primary colon cancer. On her father’s side, her grandfather, three of his brothers and a cousin had colon cancer. Wendy was 27 when she lost her mother to leukemia, right before Wendy got married. On her mother’s side she had one aunt with breast cancer and another with pancreatic cancer.

In 2010, at the age of 42, Wendy went to her GI doctor and asked for a colonoscopy due to her family’s strong history of cancer. Her colonoscopy was clear, and for the time, she put cancer in the back of her mind. Two years later, after experiencing blood in her stool, she returned to her doctor. She was offered a choice of antibiotics or a colonoscopy. She chose the colonoscopy — a choice that likely saved her life. After diagnosis, Wendy went through chemotherapy / radiation to shrink the tumor, surgery and then more chemotherapy. Her surgery was done laparoscopically in 2013 with the da Vinci robot, two surgeons and her gynecologist. Wendy had a hysterectomy in 2005 due to fibroids, but her ovaries were not removed at that time. During her colon cancer surgery, her gynecologist removed her ovaries to eliminate the risk of ovarian cancer.

Wendy asked that her entire colon be removed and her doctors agreed. She knew she would be living with a permanent ileostomy, but was comfortable with her decision. In her mind, the primary goal was to reduce her risk of cancer as much as possible. It was a bold decision, but one that Wendy knew would increase her chances of long-term survival.

Treatment was challenging and often exhausting for Wendy, but with the help of her family and church, they climbed the mountain together. Her husband, Bill, took over things at home. Her church family brought her daily meals, helped with house cleaning and sent cards and prayers of support. “Life with kids does not stop, not even with cancer,” Wendy said. “We wanted the children to live a ‘normal’ life during my journey. I have yet to know how this has affected them for the future, but I do hope they have learned compassion, recognized the charity of others and see more good than bad in our world.”

Wendy has been cancer-free since her surgery in 2013. She wants others to know that cancer can be a blessing. She has found it freeing to avoid unnecessary drama and not sweat the small stuff. She attributes the support and love of her friends, family and church to how well she feels today. In a notebook she carries with her she often references a favorite Bible quote which gives her strength — “So do not fear, for I am with you; do not be afraid, for I am your God.” (Isaiah 41:10).

With four children, ages 13, 14, 17 and 19, Wendy and her husband are faced with having their oldest tested for Lynch. Wendy knows that knowledge is power.

Wendy has survived the death of both parents to cancer, her own cancer diagnosis and the prospect that one or more of her children may be diagnosed with Lynch syndrome. She still struggles to understand and adjust to what her “new normal” is, but none of this holds her back. She has always wanted to live life to its greatest potential. Cancer has helped her put what does and doesn’t matter into perspective. To Wendy, the most important moments in her life are spending time with her family and friends and the memories they create together.