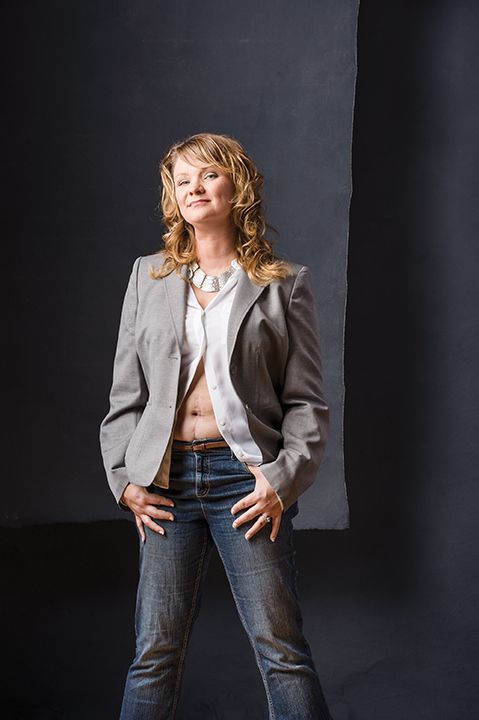 One morning in early 2012, Tina Seymour Demoran poured her belongings into a moving truck and began the three-hour drive from Jackson, Mississippi, to her hometown of Biloxi, a small town on the Mississippi Gulf Coast. It was a drive she had made many times before, but this time it was different. This time, she was returning home – to her roots, to her family and friends, to begin life anew.

Only a few years earlier, by all appearances, Tina lived a good life. She had channeled her boundless energy and drive into earning five college degrees including a law degree. She had what she thought was her dream job and she and her husband enjoyed an active social life. Physically, Tina was in great shape. She prided herself on being able to check “none of the above” in response to the question “do you have any of the following symptoms?” on the patient intake forms whenever she saw her doctor.

But in July 2008, a few years prior to moving home, her life began to change. Tina received a diagnosis of cancer. Several weeks earlier, Tina had felt a sharp pain in her side after cleaning her home and went to the hospital after the pain became unbearable. The treating nurse practitioner thought it may be her appendix, and ordered Tina to the emergency room. There, Tina had an MRI and a colonoscopy that ultimately revealed that she had stage I rectal cancer. Just five days after learning of her diagnosis, Tina was wheeled into the operating room for abdominal surgery.

Tina’s cancer diagnosis was the first domino to fall. It left her with a deep scar that started high on her abdomen, snaked around her belly button and continued down to below her waistline. For Tina, as for so many other cancer survivors, the scars left behind by cancer were as much emotional as they were physical. Tina felt guilty that she had a “country club” cancer. Early detection kept her from undergoing radiation or chemotherapy treatment, so she felt embarrassed to mention her cancer diagnosis around others who had suffered so much more during their battle with cancer. She was ashamed of her scar and embarrassed by how it made her look. Not until the 2015 Colondar photo shoot, almost six years after her surgery, would she show her scar publicly.

Following Tina’s diagnosis, other dominoes began falling. Nine months after surgery, she suffered a knee injury, which required three surgeries to repair and limited her ability to exercise. Her dream job turned out to be highly stressful and she realized that she was in an unhappy marriage. Physically limited by her injury and unhappy at work and at home, Tina began to put on weight, eventually gaining more than 70 pounds after her diagnosis. Ultimately, Tina filed for divorce and left her job. One year later, Tina headed home.

One day, not long after returning to Biloxi, Tina broke down crying after looking back at the past few years of her life and realizing that she had gone from total control to completely giving up. It was not her first crying spell since her cancer surgery, but this time, she decided she’d had enough. Determined to take control of something in her life, she drove out to the Ocean Springs/Biloxi Bridge and walked its entire 1.7-mile span and back. “That’s a start,” she told herself. The next day she drove out to the bridge and walked the 3.4 miles again. Things snowballed from there. She started running. She bought a bike, then a kayak. Over the next six months, she lost 60 pounds.

With things in her life headed in the right direction, Tina began to socialize again. At one outing, she ran into an old high school friend, Philip. They talked deep into the night and soon became inseparable. It was not until two months after meeting Philip that Tina showed him her scar. She dreaded the “big reveal” and was tremendously relieved when he said, “That’s it?” They have been together since, and are now married.

While many, including Tina, initially regarded her cancer diagnosis as bad news … seven years later, she knows hearing the words ‘You have cancer’ made her re-evaluate what was truly important in her life. She has found her love in Philip, she is living in a beautiful home on the bayou that they restored together, and she is a successful attorney on the Coast. Most importantly, she is home. Not just the home where she grew up and where her friends and family are, but the home where she learned that she had the strength after cancer to change her story and start living again.