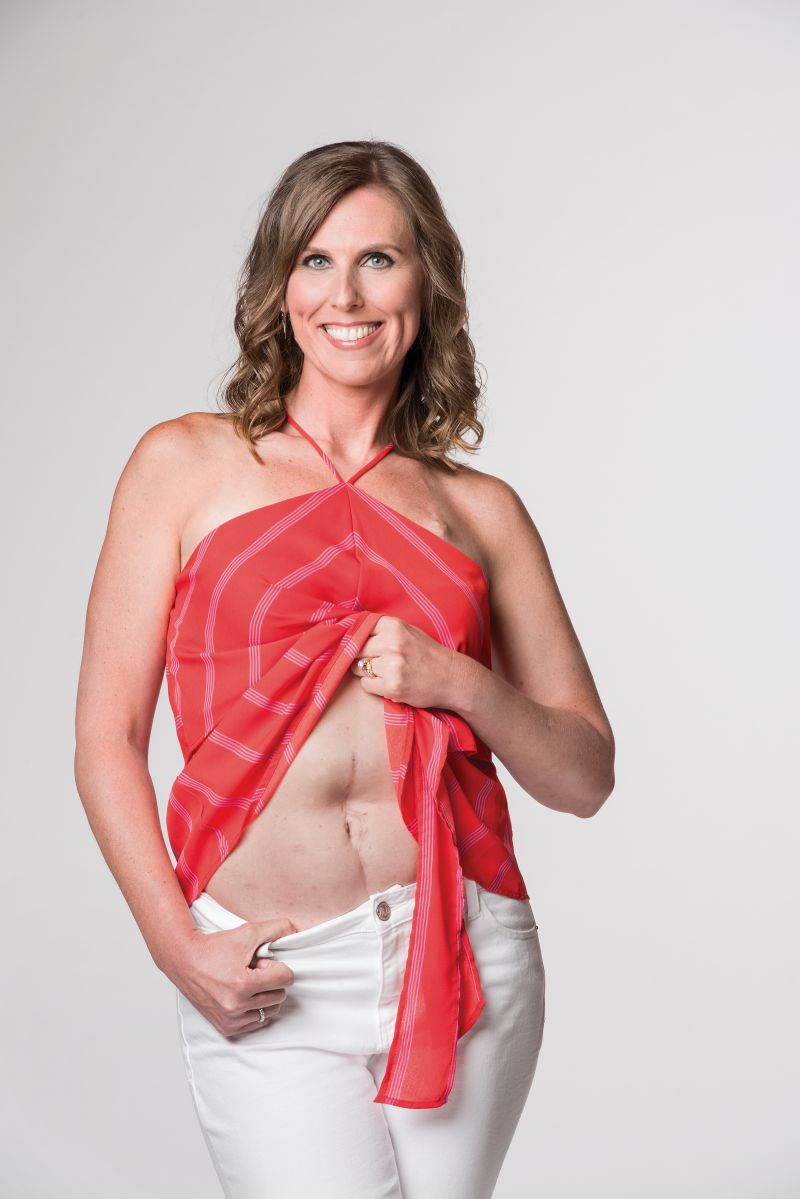 She refers to herself as “Big Stace,” and it’s very fitting. Not only is she five feet eleven inches tall, she has a big presence and a big zest for life. She still holds the record for female longest reach in her high school’s history. In second grade, when asked what she wanted to be when she grew up, she said, “I want to be the first woman president.” (I believe she could be if that was what she still wanted.) When she was a child, her father taught her two important lessons: “You can do anything” and, “Don’t accept ‘No’ for an answer.” These two lessons have served “Big Stace” well in her adult life.

Stacy is a health-conscious, athletic, busy working mom. She and her husband, Drew, met in graduate school, where she earned two Master’s degrees: one in Business Administration and one in Health Administration. They were great friends for years and shocked not only their friends, but themselves when they realized they were in love. They married and soon had two sons.

Griffin, now 14, is a “mini me” of Stacy. He had no trouble on stage recently, speaking in front of more than 1,000 people at Coaches vs. Cancer (an American Cancer Society program), in Pittsburgh. Creative, talented, funny, and completely comfortable in his own skin, Griffin is the laughter in his mother’s life.

Emmett was born two years after Griffin and suffers from a chromosome disorder that is so rare, it doesn’t even have a name and there are only three other cases in the world. Emmett is unable to function for himself in any way, and his multiple special needs require constant supervision. Anyone who sees Emmett when Stacy walks into a room, will see his eyes light up — a true momma’s boy! He is the light of her life and enjoys seeing him smiling and laughing.

Caring for Emmett is a full time job shared by Stacy, Drew, and a nurse. Along with doctor appointments, therapies, maintaining medicines, and diapering him, all of Emmett’s food has to be pureed. He has to be fed, but Stacy considers this a major victory after being told he would never be able to eat and would require tube feeding.

Stacy was so busy being a supermom, that when she began experiencing symptoms, she put off going to her doctor. Instead, she chose to self-diagnose herself with IBS and internal hemorrhoids. Months later, the pain was too much for her to bear. A colonoscopy revealed a large tumor in her rectum and subsequent scan found cancer in her liver, five spots on her lungs, and 19 cancerous lymph nodes.

She had no risk factors. She was under age 50, had no family history, never smoked, maintained an average weight, and routinely exercised. Genetic testing later revealed her colon cancer is MSS, KRAS mutant, BRAF wild type, and KRAF wild type. She got the news her cancer was stage IV on her 44th birthday.

“It was the last thing I ever expected,” she says. But she was prepared to fight.

Stacy’s treatment has included 55 chemotherapies with a combination of 5FU, Leucovorin and Avastin; 10 included Oxaliplatin and SBRT (radiation). She has two resection surgeries to her rectum and liver, and a medical mistake during one of those surgeries nearly claimed her life. Stacy fought back and continued her treatments when in March of 2016, she was miraculously declared NED. Although she will continue maintenance chemo for the rest of her life, she’s relieved to claim the NED status.

“There’s no way I could’ve been so vigilant in my battle had it not been for what I learned from enduring the grieving and advocacy process with my special needs/disabled son,” she says now, calling Emmett “The Original Warrior.” “That experience prepared me for what followed with my cancer diagnosis. There’s a path to victory that I’ve traveled twice now and am ready to share with the world. Along with my education and professional experience in healthcare, I have some sure fire tips for overcoming life’s pitfalls with fortitude, grace, and humor.”

Throughout her treatment, a lot of people told Stacy how well she faced a stage IV cancer diagnosis and how inspired they were with her positive attitude. With her work and life experiences, this tenacious wife and supermom has become a fierce advocate who enjoys blogging and being a motivational speaker.

She said the best tip she can offer is to focus on what you are living for and let that lift and push you further than you’ve ever gone before. For Big Stace, it has always been her precious sons who need their mother. “It wasn’t, ‘I don’t want to die,’ but rather, ‘I can’t die, ’” she says, “That kind of love-embraced stubbornness is why I am still here, and will be for many more— better— birthdays to come.”

Every day, Stacy lives her life proving she can do anything. She won’t take “no” for an answer.