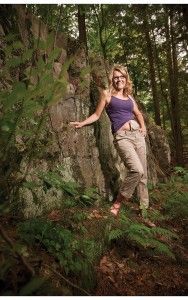 In the fall of 2008 I was as happy as I’ve ever been with the way my life was going. I’d stopped teaching after our second child was born in 2005 and was enjoying being a full-time mom, my husband had recently accepted another job that eliminated his need to travel away from us all week as a consultant, and I was wrapping up the last semester towards my master’s degree in education.

As December and the end of my last semester came, I was looking rather thin, but I attributed the weight loss to the stress of my last semester.  Right around Christmas, I noticed some blood in my stool and I was feeling quite fatigued, so I scheduled an appointment with my family physician, but I really wasn’t worried that it would be anything serious. After telling the doctor about the weight loss, blood in my stool, and fatigue, he wanted to prescribe me an anti-anxiety medication, and related the blood to hemorrhoids.  I refused the anti-anxiety medication, as I really didn’t think it had anything to do with my nerves, and I agreed to call him back if anything changed.

Less than six months later, this occasional bleeding became a regular daily occurrence, bowel movements were extremely painful, and I constantly had the urge to get to the restroom. I called my physician and told him the rectal bleeding was certainly getting worse, and that it was now accompanied by daily constipation, so he referred me to a gastroenterologist. My first consultation was scheduled for the day we were leaving for vacation. When I arrived at the doctor’s office, it was apparent he was running behind. I asked the receptionist when I might get into see the doctor, and she said he was almost three hours behind schedule. If I wanted to go on vacation, I knew I couldn’t stay for this appointment. I called my physician and explained the situation. He said to go on vacation and that we would deal with this when we get back. I honestly believe that this was God allowing me to go, relax, enjoy my family, and unknowingly prepare for the fight of my life.

After a relaxing family vacation, I returned home and I was sent to a different gastroenterologist. This time there was no waiting. I explained my symptoms, and after a quick exam my world was spinning faster than I could keep up. The doctor explained that there was a mass in the lowest portion of my rectum, and he said “this could be very serious.” He ordered blood work, an MRI, and x-rays, and two days later I had a colonoscopy. I remember laying in the recovery room with my mom and my husband when the doctor said, “Staci, it’s cancer.”

After going for consultations with a gastrointestinal oncologist and a colorectal surgeon at the Cleveland Clinic, I found out I was dealing with Stage III rectal cancer, and shortly afterwards I began treatment: 28 rounds of radiation and a daily diet of Xeloda pills.   During that first consultation with the surgeon, he explained that because of the low location of this tumor, my entire rectum would need to be removed and I would have to have a colostomy. I came to terms with this rather quickly. I knew I would have this “bag” for the rest of my life, but having a “bag” meant having my life.

Eight weeks later I went in for surgery, and according to my surgeon, everything went well. Days afterward, he and his team were pleased with my progress. I was walking the halls, drinking my meals through a straw, and moving on to soft foods. Finally my ostomy started to function, I had great bowel sounds, and soon enough I was being released. I came home on Thanksgiving Day, and I was so grateful to get home to my family.

The “being home” part for which I was thankful turned out to be short-lived. Late Friday night, I started having severe stomach cramping, and sometime after midnight I was vomiting. My home health care nurse was coming to check on me, and when she arrived she took one look at me said, “You have to go back.”  I grabbed my husband’s hand, and just started crying. I had only been home for less than 36 hours.

I spent the next thirteen days back in the hospital — the first six days with an NG tube up my nose trying to wait out the “kink” that had developed in my small bowel. However, the “kink” never moved and I found myself going back into surgery for a small bowel obstruction. After this surgery, I did not get the “all went well” from my doctor. This time, when I woke up, my surgeon said, “Wow, you really scared us,” and I was in the cardiac unit. My heart had a violent reaction to the medication I was taking, and went into tachycardia, and I spent the rest of my hospital stay being monitored by not only the colorectal staff, but by the cardiac staff as well. My second homecoming was on my youngest son’s second birthday. He didn’t know it, but it was the best present (for me).

I spent the rest of December recovering and gaining my strength, and three weeks into January I started chemo again. From January through May, every two weeks I was hooked up for a chemo infusion of the Folfox cocktail at the Cleveland Clinic and then wore the chemo pump home for 48 more hours of 5-FU. One week after finishing my last round of chemo, I formed my Relay for Life team, and I couldn’t wait to walk the survivor’s lap. Little did I know that not only would I walk the survivor’s lap, but I’d help to lead it as the Relay Queen, after having been nominated for that honor by my husband. That weekend was a great way to celebrate the ending of chemo and beginning of the rest of my life.

Now, a year and a half out of surgery and just over one year chemo free, I am still rebuilding my body from the chemo, radiation, and surgery damage. I know one day soon I will have all of my physical strength back, but every day is a blessing. My scar and my “bag” are nothing more than reminders of how far I have come.