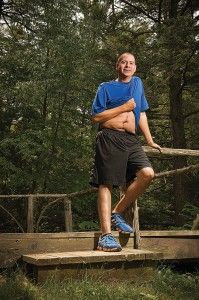 October 8, 2008, I was diagnosed with rectal cancer.  This was the day I felt like I had lost control of my life. My initial diagnosis was Stage III because the PET scan detected some swollen lymph nodes north of my tumor. This could have been just an infection or it could have been like it was called “worst case scenario” cancer that had spread to my lymph nodes.

I really did not have any symptoms before this diagnosis, I just felt like I could not go to the restroom, this was not an ordinary feeling for me and I felt something was wrong. My dad had a benign tumor removed from his colon about eight years ago, so there was some sort of immediate family history of polyps. I had always told myself that I would get a physical and colonoscopy when I turned thirty because of this. But the age of thirty came along and I felt great and put off the check up for a year.  A year and half passed and I started feeling this slight constipation in September 2008, I decided to go for that wellness physical. During this physical my family doctor explained to me the many causes of constipation; from dehydration, to poor diet, to hemorrhoids, but not even a mention of the word cancer.  But due to my dad’s problem, and another family member passing away from cancer, he decided to refer me to a gastroenterologist for a colonoscopy, which I am so grateful he did. In the next couple of weeks I started feeling better and almost cancelled the GI appointment, but at the urging of my wife, I went through with it, again something I have to give thanks for.  The procedure occurred on September 29, 2008 and I received my cancer diagnosis on my follow-up appointment on October 8, 2008.  I remember hearing you have rectal cancer and nothing else.  I was stunned and had no idea of what to do.  I had lost control of my life.

On the same day of my diagnosis, my GI handed me a schedule with various appointments with my oncologists and surgeon.  Fortunately, I have had a very great and supportive medical team from the very beginning.  My oncologist was very pro-active and was anxious to get me started on chemo.  I was so confident in his research and recommendations that I never even thought of getting a second opinion.  My oncologist set up all the follow up scans needed to stage this cancer. I also met my radiation oncologist who worked on getting me ready to receive the radiation I would need to kill the tumor. Fortunately, all my scans came back clear and negative except for a couple of lymph nodes that appeared enlarged on the PET scan.  Due to these nodes I was diagnosed at a Stage III, and my treatment was to go accordingly with this.  My chemo treatments began on October 22nd in hopes to shrink the tumor and avoid a colostomy.  Radiation took place five days a week from October 22, 2008 to December, 17th along with the radiation I was to carry my fluorouracil 5 chemotherapy in my infusion pump for seven days a week, to shrink the tumor and begin to kill cancer cells in my body. After my chemo-radiation sessions my body was allowed to rest for one month before the surgery. My oncologist wanted to stay aggressive and decided to give me two Folfox chemotherapy sessions to keep the tumor down.

On January 20, 2009, I underwent a lower rectal resection to remove nineteen inches of my colon and rectum and lymph nodes. I went into this surgery expecting 100% that I would wake up with a colostomy.  I was even marked in the spot where it was to be placed. After six hours, I woke up to the news of my surgeon putting me back together and that everything else had gone well.  During my recovery that week, I was told that pathology results showed the tumor contained very small amounts of cancer left and that twenty-one lymph nodes taken out were all negative for cancer, so I was downgraded from a Stage III to a Stage II. I felt like I could gain control of the situation and became confident that I could beat this. In February 2009 I started my Folfox sessions which were given to me in one four hour sitting along with a take home infusion pump for one and a half days this was supposed to last until August 2009, but with a few low white blood cell counts to delay my sessions, I would need Neupogen or Neulasta injections to boost my cell counts up. This caused my chemotherapy sessions to last until September. In September I was told I was cancer free, my CEA levels were at zero and I was given the opportunity to remove my medi-port.  At this point I felt I was gaining my life back.

Even though I remain cancer free, I still suffer from side effects from the many treatments I received to destroy this cancer; Neuropathy kills my hands and feet and I am told that this could last as long as ten years, it just depends how much and how fast my body can heal. My major problem is constipation, diarrhea, and constant gas.  These symptoms are due to the scar tissue that has formed from the radiation and the surgery. Everyday is a struggle, my tailbone always aches from the radiation and I try to control my many bowel movement accidents with medication. But I am getting stronger and better every day and my good days are starting outnumber my bad days.  In June a PET scan was scheduled and revealed suspicious activities in the area where I was put back together.  My oncologist advised that this meant a recurrence. The scan detected some activity in the area where I was put back together.  A biopsy would resolve the issue.  My rectal surgeon performed the scope and biopsy and results came back negative.  The suspicious activity was some type of inflammation in the scar tissue.  My rectal surgeon monitors my scar tissue every three months and every biopsy he has taken has come back negative.

When I was diagnosed I was very overweight.  I lost about eighty pounds through the whole process, which is mostly due to the chemo and radiation.  But now I feel great and have vowed to keep the weight off and stay in shape with exercise and a healthy diet. In January 2009, I started walking daily and my strength and stamina began improving and I felt like I was in control again.   As I got stronger I started jogging and knew I was in control again.  I ran my first half marathon in February 2011, I am going to run another half in November 2011. Then my first real official marathon will be in Austin on February 2012.