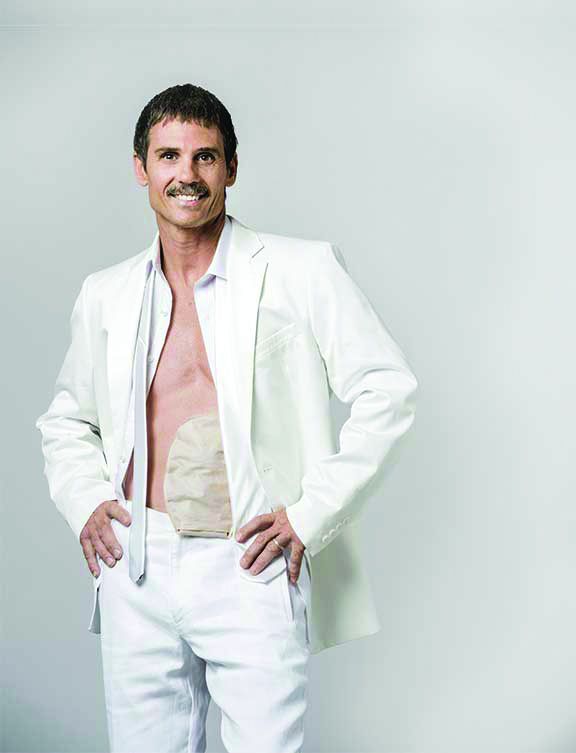 It is hard to believe that I could go from being perfectly healthy one day to YOU HAVE CANCER the next! After all, I was only 39, I was young. I had an occurrence of passing blood in my stool so I went to the doctor and they said that I needed to have a colonoscopy. The colonoscopy showed that I had a polyp, the doctor removed it and they sent it off for testing. I received the call that no one wants to get…it was malignant and I needed to find a surgeon!! The surgery was a success! The doctor did have to remove ¾ of my rectum to be sure that all the cancer was gone. It was caught early, so it had not spread and I did not have to have chemo or radiation. The recovery time took a little longer than I thought. I went in to the hospital weighing 150 pounds after the surgery and two weeks in the hospital I came out weighing 105 pounds. I not only felt weak, I looked weak. I had to have help doing even the simple things. Things like that are just as hard on your mind, heart and emotional well-being as it is on the physical. I gradually regained my strength and life got back to normal. I had several blood tests and colonoscopies over the next few years. They all came back negative! Hooray, no cancer!

Then five years later, I began having pain and a lot of discomfort that made it painful to sit. The doctor was not sure at first what it was. They didn’t know if it was an abscess or what it was. I went through tests and had IV’s for a couple of weeks; that didn’t fix it. The pain was continuing to get worse. The doctor determined that I had developed a pocket that created a fistula. I dealt with the fistula draining and the pain for the next few months. The pain and discomfort continued to increase and pain medicine wasn’t working very well.

I chose to have a temporary divert colostomy. The pain was so bad that I had to do something. The divert colostomy would give that fistula a chance to heal. The hardest part, I guess, was to come to terms with the visual and the physical change. I wasn’t real comfortable with it at first. Once I recovered from the surgery and got used to having the ostomy, my life returned to normal. I have found that there is not much I haven’t been able to do. I still go swimming, water skiing, snow skiing, motorcycle riding and indoor water surfing; I even rode a camel in my church’s Easter play. My ostomy does not stop me from doing the things I love to do.  I thank God that I am able to get up and keep going.

In February 2013, I will have had my ostomy for four years. I have to be honest, this four-year-journey was not always easy and I had my struggles, but I AM A CANCER SURVIVOR!  Although I have an ostomy, it does not control me. Most people are shocked when they learn I have an ostomy. They always say “you would never know by looking at you that you have an ostomy.” The people that know I have the ostomy forget that I have it unless I have gas! If you or someone you know happens to need a colostomy (ostomy), it is okay. Life goes on and it does get easier. Don’t be afraid to ask questions. My doctor, Dr. Waller, and his staff always answered any of my questions or my wife’s questions no matter how many times we called.

Through this journey, I have met lots of people and made some good friends who have an ostomy too. It is always nice to talk to someone who can relate with what you’ve gone through. It is fun to share stories and laugh, and the stories we could tell – LOL!