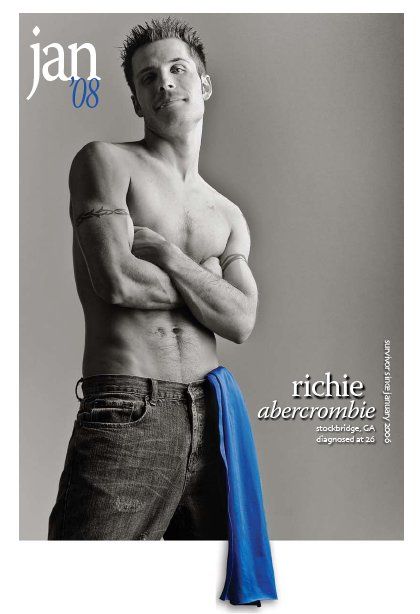 I had been experiencing bleeding during the “# 2” process for about three years.  That’s a long time to go with that problem, but after a few weeks it kinda turned into normal life.  I had been diagnosed with hemorrhoids when I was 21, so I thought the two were related.  In the middle of the summer of 2005, I started having severe pain in my rectum that I would describe as someone having their finger inside of me and trying to push it outward.  Very painful, but I still thought I had a bad case of hemorrhoids.  The pain went on and I was medicated for it until I could get a colonoscopy set up.  The day of the scope came and my mind was so far from cancer that I looked at the visit as a game. I went in, got my scope, flirted with some nurses, walked to the conference room and got the news.  The doctor told me I had a large tumor in my rectum and that they could save my life, but I would most likely have a colostomy bag for the rest of my life.  I would need radiation and chemo. That’s about it.  She told me what surgeon she would recommend, and that was it.  I haven’t seen her since. Then I went to see my surgeon.  He looked at me and decided that there was a good chance that he could save the use of my rectum.  That was all I wanted to hear.

So after 25 rounds of radiation and a month on Folfox, I had my surgery.  I had a temporary ostomy for 5 weeks and then had it reversed.  I had 2 feet of my large intestine taken out and all of my rectum. The side effects are terrible, but they are getting better every day. One of the hardest things about being treated for colon cancer is the pain medication.  I asked for it.  It was offered to me and I needed it, but at the time when I thought I was better I realized I had a drug problem with the medication.  So, be careful because those pills have a bad bite. It took the better part of 4 months to get me over the addiction and I still have a craving for the drug.

During my fight I had to sell my house and move in with my parents.  My job gave my position away, which they said wouldn’t happen, and I found out that the disability insurance company that my work had bought was worthless.  From normal life to this SUCKED!  But if I had a chance now, I wouldn’t change a thing.

My experience with cancer has been hard.  Nothing went right.  Every time I turned around, somebody was there telling me more bad news.  I thought, “How hard can you fight and still be able to deal with all these problems?”  I just turned off the outside world and went into survival mode.  I shut myself out from family and friends and stuck to myself.  I was depressed and blamed my God for doing this to me.  I had terrible side effects from the surgery and I couldn’t even leave the house because they were so bad.  When I was in my shell I saw the St. Jude’s advertisements asking for money on TV and when I saw those kids I would start crying.  I saw the same ads before the cancer and would change the channel.  That’s when I realized that this had changed me for the better and the more I thought about it the more I grew.

Looking back on all the bad stuff that happened to me, I can’t believe how far I’ve come.  I’ve grown so much and the person I am now is a better person.  I wouldn’t go back to the old Richie for anything. I care about people so much more and I am in a better place now. My thoughts on cancer may differ from other people.  Colon cancer is the most degrading cancer of all of them, I think, and that is why it’s hard for people to deal with it.  I am reminded every day of my fight, but now I accept the bad days I have as a reminder to keep me on track of the person I am today.

UPDATE: We are sad to share that Richie Abercrombie passed away on April 30, 2011.