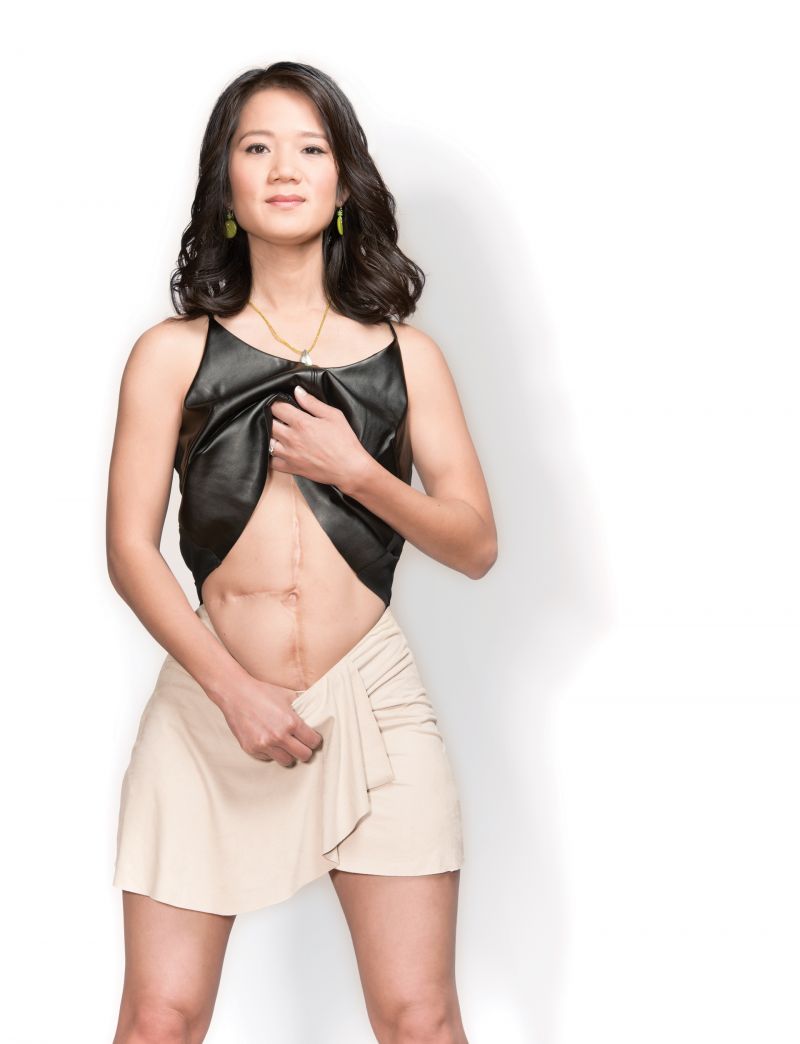 The first impression one gets upon meeting Phuong (Ly) Gallagher is that here is someone who has their act together. She is intelligent, confident, engaging and quick to laugh. It would not surprise you to learn that she is a successful professional with a happy home life. But Phuong’s calm and easy-going demeanor belies the fact that her body has been the battleground for an ongoing war with cancer that is now almost a decade old. When she was just 29, Phuong was diagnosed with stage III rectal cancer and is now a stage IV survivor, having endured not just one, but four metastatic recurrences.

Phuong’s cancer diagnosis came out of left field. She was young, healthy and her family had no history of cancer. When she started experiencing violent and excruciating stomach pains in 2006, her doctor did not think that cancer could be the cause — she was too young. She was told it was likely IBS and to switch to a bland diet.

The symptoms slowly worsened, but Phuong distracted herself with planning her upcoming wedding. Her friends began asking her if she was losing weight, but she thought nothing of it since at 5’4” and 105 pounds she already cut a thin figure. A few months after the wedding, she was playing in the backyard of her new home with her husband, Ed, and her stepdaughter Taylor, when she unexpectedly felt winded. She went inside to sit down but was unable to get back up — she simply lacked the energy. Ed came in to check on her and after seeing her condition dragged her to the hospital, despite her protests.

Phuong and Ed were shocked when she tipped the scale at just 85 pounds. The combined symptoms of weight loss and stomach pains did not go unnoticed and her nurse practitioner urged Phuong to see a gastroenterologist, who ordered a colonoscopy. Were it not for a concerned husband and an insightful nurse practitioner, Phuong does not believe she would be here today.

The colonoscopy revealed a mass — stage III rectal cancer. The first week was a frightening blur, but as Phuong went to see each doctor that was referred, she quickly realized that she lucked into her “dream team” of doctors.

The primary question Phuong had about treatment was its effect on fertility, an issue of great importance to many young colorectal cancer survivors, but one that is often overlooked in younger patients because of the stigma of cancer being an “old person’s disease.” While Phuong was already a loving stepmother to one daughter, she reminded Ed that “Ly’s have babies.” Phuong was crushed when she was told that radiation would leave her unable to carry children and took the news harder than her diagnosis. She and Ed looked to egg harvesting, but there was simply not enough time since they were given only a week to decide on treatment to keep cancer from gaining a stronger foothold.

Treatment was a grind. Phuong underwent chemotherapy and radiation treatments to try to shrink the tumor before surgery, working throughout, as she welcomed the distraction and found comfort in its routine. She refused to relinquish her role of soccer mom and made it a point to attend all of Taylor’s soccer games and practices, ultimately watching some from a wheelchair. “Missing just one makes it easier to keep missing them.” She would not let cancer stop her from living her life and making memories. The treatment was successful. Her tumor had shrunk enough that she was spared from having to receive an ostomy.

Phuong would enjoy just two years of cancer-free living before a follow-up scan showed the cancer had returned, this time in her liver. The scan would mark the beginning of six years of additional rounds of surgeries, chemotherapy and other procedures, as the cancer would reappear in her lungs and then twice more in her liver. Since her last recurrence three years ago, the cancer has been kept at bay.

After all she has been through, Phuong could be mad at the world, resentful about what cancer has taken from her and anxious about her future. Instead, Phuong embraces the challenges as an opportunity to help other survivors get through their dark times. Cancer has brought her closer to her family, introduced her to some amazing survivors, and reminded her of the things that are truly important.

Phuong continues to want to help others, especially the newly diagnosed. She remembers the uncertainty and helplessness she felt in that first week and often thinks about how much it would have helped her to have the support and knowledge of someone who had already gone through the experience. Phuong learned from her own journey the importance of being your own health advocate, and wants to pass along that wisdom to others. She wants people to know that they are the ones ultimately responsible for their health care decisions, and that they should not be afraid to engage in conversations with their health care providers when discussing treatment options, instead of just accepting what they are told as gospel.

Phuong is optimistic about her future. She has three years of clean scans and blood work under her belt, is flourishing in her career and is enjoying the strengthened family bonds brought about from her struggles. She is looking forward to moving back to Southern California after Taylor goes off to college, at which time she and Ed plan to explore adopting a child. Phuong is not simply surviving, she is thriving.