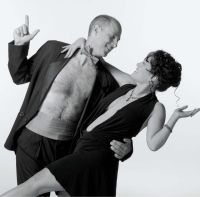 When she first found out she had colorectal cancer and needed an ostomy, Melissa Stahl expected a rough road ahead. Since then, she’s realized that things aren’t always as bad as they seem.

In college, Melissa had rectal bleeding, fatigue, changes in her bowel habits, and lower back pain. She finally saw a gastroenterologist who gave her a sigmoidoscopy and found a cancerous mass that required surgery. Melissa woke up with an ostomy and was diagnosed with stage III rectal cancer. She thought the ostomy would ruin her life, but found that it didn’t change things as much as she thought it would.

Melissa hopes to have her ostomy reversed soon. Despite her initial concerns, an ostomy offered convenience and control, and now she has a lot to celebrate!

MELISSA’S STORY AS TOLD BY MELISSA:

My story starts in February, 1989.  My life was pretty good so far, up to that point.  I was 20 years old, in college and enjoying life.   The first recollection I have of a problem was when I noticed some spotting of blood when I’d go to the bathroom.   It wasn’t enough to send me to the doctor, but it was noticeable.  Like most people (especially young people), I shrugged it off as nothing.  Over the next few months, I became easily fatigued, noticed greater amounts of blood, and just didn’t feel myself.   I also started to experience a pain low in my back.    I couldn’t imagine it was anything serious but when I look back I realize my body was sending me all kinds of signals.  I just didn’t listen.  By the time the semester was over in May, I was bleeding quite a bit and my bowel movements weren’t normal.

Shortly after my 21st birthday in June, we traveled to California for a family reunion. I was miserable the entire trip.  The bleeding, fatigue and pain got worse.  I hadn’t told my parents about any of this because I really didn’t know what to think.  I wasn’t going to the bathroom or eating normally, but in my mind I thought it must just be the stress of school and working two jobs during the summer.  I was looking forward to the family vacation.  I was sure that I’d be able to relax, have a good time and the symptoms would stop.  I’d be normal again.

That didn’t happen.  In fact, it got worse. The symptoms got progressively worse and I realized something needed to be done.  I told my grandfather, a retired physician, about my concerns.  I didn’t want to tell my parents in case it was nothing serious.  He was pretty concerned and called a gastroenterologist who said he’d see me that afternoon. The doctor used a flexible sigmoidoscope to find “it.” The polyp was low in my rectum.  I was told that because I was young, healthy and followed a pretty good diet, the chances of me having colorectal cancer were very low but he would biopsy it anyway.

The phone call came a few days later saying that I had stage III rectal cancer.  After we got over the initial shock, my family rallied behind me and we came up with a plan of action.  I was given so much information, advice and support.  When I look back on the events that followed, I realize how great my family was and continues to be.   I knew then the value of a good family.  And if there’s anything I’ve learned through all this, it’s to ask a lot of questions and get a second opinion, especially on treatment options.  The first doctor I saw wanted to shrink the tumor with radiation and chemo followed by surgery.  The second opinion was to do surgery followed by radiation and chemo.  I decided on the second option.  My doctors answered a lot of the questions my family and I had.  I wanted the cancer out of me and I had a good feeling about the surgeon.  For me it just felt right.  Turns out, it was the right decision. I had the surgery at LDS Hospital in Salt Lake City on July 6, 1989.  I also had chemotherapy with 5-FU along with radiation therapy.  I feel blessed to have had a group of doctors and nurses that were truly a “team” with me and my family.  The treatment plan was aggressive for that day and for someone my age.  However, because of the aggressiveness of the treatments, I have dealt with some things most women my age don’t worry about.  I went through surgical menopause.  I’ve been through hormone replacement therapy.  I get screened for osteoporosis.  I’ve dealt with infertility.  And I’m not even 40!  On a bright note, my husband and I are in the process of adopting a baby!

One of the main concerns before my surgery was that the tumor was very low in my rectum. The doctors weren’t sure that they would be able to save the rectum and a colostomy was a real possibility.  A colostomy?!  I knew that people who went through cancer treatments had the potential to lose hair or get thin, but the idea of a colostomy really threw me.  Part of my apprehension was pure ignorance.  Part of it was that I was 21 and in college.  I just wanted to be normal and fit in.  I didn’t know anyone with a colostomy.  I kept thinking, “How can I function as a normal 21 year-old with a colostomy?  How drastically is this going to change my life?”

After surgery, the first thing I did was look down to see if I had a colostomy.  I did.  And I cried.  But I also learned that it was not “the end of the world” as I had imagined.  My surgeon assured me it was probably a temporary thing and that someday they would be able to reverse it.  Strange enough, I had an easier time accepting the cancer than I did accepting the colostomy.  At the time, the American Cancer Society was a great resource for me.  They sent a volunteer to visit me and answer any questions about my colostomy and colorectal cancer.  She was a lovely woman in her late-60’s who had grandchildren.  Although helpful in ways, I kept asking myself, “How could she help with the concerns and questions of a 21 year-old?”  I had great support from family and friends, however I felt alone in a way.  As far as I knew, there was nobody else out there who could understand what I was going through.  And even if there were, how would I have found them in the pre-internet era?  I think one of best things about The Colon Club is that it gives people dealing with these issues a forum to discuss, ask and learn about any aspect of this disease.  What I would have given for such a resource when I was going through it all!  Thanks Colon Club!

Looking back I realize that many of my concerns were truly unwarranted.   I thought a colostomy would keep me from doing a lot of things.  Fortunately, I found out that it didn’t change much at all – my diet was pretty much the same, I could ski and swim, and I could still travel, although I just needed to pack a few more things.  I thought a colostomy would have an odor people would notice.  I found out that the pouches have odor barriers and very rarely was odor an issue.  I thought everyone would be able to tell I had a colostomy.  I found out many people had no idea I had one.  In fact, there were many people I met after my surgery and knew for years, who didn’t even know I had a colostomy.   The main thing I realized was that having a colostomy didn’t change who I was.  And I intended to live my life as planned.

After 12 years with the colostomy, I successfully had it reversed in 2001 at the Milton S. Hershey Medical Center in Hershey, PA.  I had so much scarring from the radiation that I had to wait a little longer than originally thought.  It wasn’t an easy process (two surgeries and many tests) but once again, I had a great team of doctors and nurses that I trusted and respected.  I can truly say that if I had not been able to have it reversed, I would have been able to continue living a fulfilling life with my colostomy.

Although I was doing well for years after the reconnection, I had surgery to repair a perforation in my bowel in December, 2005.  In order to allow the area to heal, I was given a temporary ileostomy. Yes, it’s a minor setback but I am otherwise healthy and happy.  I’m hoping to have the ileostomy reversed in the near future.   The bottom line is that I have not stopped living because of an ostomy.  Life is, after all, what you make of it.  The rest of my story is pretty simple.  I get yearly blood work, yearly digital rectal exams and a colonoscopy every three years.  It’s been 17 years since my surgery and every year that passes, I feel truly blessed.  In fact, every year on July 6th, I have a little “celebration.”  Nothing big… it’s just a great time to remind myself how fortunate I am to have my health, a wonderful family and friends that are so supportive. While I would never wish this on anyone, I realize how much this experience helped me learn about myself, my priorities in life and those around me – and for that I am grateful.  I actually consider myself to be a very lucky girl.