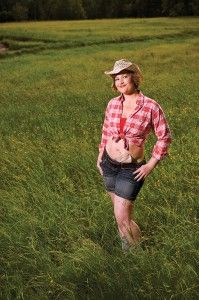 It’s hard to imagine that I trusted my doctor for over 8 months when I knew something was truly wrong with me. I had never gone to him specifically for blood in my stool, but I had always mentioned it along with my other symptoms when I went in for asthma related problems. At my visit before transferring to Iowa State University I had told him that my appetite was off and I was still having occasional bleeding with pain when I pooped, and expressed my concern of having colon cancer. My grandfather had passed away from colon cancer just two years prior. Knowing my history and never doing an exam, I called him out and requested a referral to see a Gastroenterologist. He threw a fit as he went on a rant of college kids stressing out, and not eating a proper diet. He told me I had hemorrhoids, and told me my insurance company wouldn’t cover a colonoscopy or G.I. visit because I was too young for cancer.

I left the office wondering how this person could really be a doctor and I brushed off my symptoms, thinking it was all in my head. I went on with my life, trying to be excited about being a 20-year-old transferring from a small community college to a big university. Not even a month into college I came to the end of my rope. I could no longer ignore my pain. I was going to the bathroom over 7 times a day. I always felt like I had to go, and there was blood almost every time. I couldn’t sleep at night because I was in so much pain and I was getting behind in school. I even completely lost my appetite, and I immediately knew something was wrong because I love eating food! I wanted to go to the emergency room but I didn’t want to go alone. I decided to call my home doctor. He was unwilling to help me locate another doctor, and told me to go to the student health clinic. I knew that I would get nowhere with the student health clinic, so I called my mom and told her everything. I begged her to get me in touch with a doctor that could actually help me.

After a few more frantic days and many phone calls, my mom called me back to confirm an appointment at the end of November. I burst into tears as I told her I couldn’t wait that long. I called the office and begged for a sooner visit. I ended up with someone’s cancelled appointment. On the last Friday in September, I skipped class and drove 5 hours across state lines to finally see a G.I. doctor.

It was great to finally get some answers with this new doctor. He took me seriously and listened to my symptoms. In less than 15 minutes of discussing symptom, we had ruled out every single possibility that the previous doctor had come up with. That was the day that the tumor was found with a simple digital exam. A sigmoidoscopy was also done, and biopsies were taken. I didn’t get confirmation of cancer the same day, but it was confirmed that I wasn’t making this all up, and this was indeed a serious issue. The doctor told me that he would call me on Monday with lab results. I went back to school and attempted ‘normal college’ life. I kept my phone on silent expecting the call all day. I hadn’t heard from him, so I called him after class on my way to my apartment on the bus. That’s when I got the heart stopping news. “I’m sorry, but it’s cancer and it’s really aggressive. You need to go to the hospital as soon as you can.” On a bus full of people, I broke down and cried my eyes out. I’m sure everyone thought I was crazy.

On October 2, 2008 I went to the University of Iowa with my parents and boyfriend to have further testing and to discuss treatment options. It was confirmed that I had aggressive stage 3 rectal cancer. I had been doing my own research and knew that this was going to be the diagnosis and I knew that I would end up with an ostomy. So much was going through my mind that I didn’t even know where to begin. I decided seek treatment closer to home so that I could be around my family, friends, and my church community. I also knew that I would have to quit school. Quitting school seemed so unreal. I lost a lot of scholarship money, and my insurance company tried dropping me because I was no longer a full-time student.

I’m grateful that my doctors were concerned about saving my life, but I was disappointed that no one discussed my fertility preservation options. After requesting the option, I was referred to a clinic in Chicago and started the process of freezing my eggs. I was lucky, it only postponed my treatment about a week but I’m so glad I took this step. To this day, I still battle hormone issues and am unsure of my fertility status. Most of my doctors say that I’m most likely infertile.

I did 28 rounds of radiation, and 28 doses of Xeloda for chemotherapy. It was kind of frustrating towards the end of treatments. My skin got burnt so badly, and because I was so young, no one would listen to me. I got the ditsy reply that I’m young therefore I heal fast. Due to my severe burns, my surgery was put on hold and rescheduled for a month later than originally planned. During chemo, I had 2 separate blood infusions to keep me going.

My surgery lasted around 9 hours and was the first laparoscopic APR done at the hospital. I was in the hospital for one week. Out of 30 lymph nodes removed, 7 of them were cancerous. Living with an ostomy was a huge struggle for me but I didn’t really have a choice in the matter. I loved wearing tight T-shirts, bikinis, low cut jeans and being free from bulges on my belly. The thought of pooping differently was a big deal for me, and I didn’t want anything to do with it. I was so worried about losing my friends, and of what others would think of me. I have now come to terms with my new body and I no longer care what others think of me. I pick living with a colostomy over death any day. It has pretty much saved my life. Without it, I’m sure the cancer would have quickly spread throughout my body and I would have already been dead. Believe it or not, my quality of life is the same, if not better. It no longer hurts to poop, and I can do most things that I did before my surgery.

Not even a month later, I had my port put in and started my 6 months of adjuvant chemotherapy. I was on Folfox 6 for one week straight and then off for another week. It was hard getting used to the cold sensitivity that came along with treatments. That August I decided to go back to school. I never thought chemo and 16 credit hours of college would be so hard. I would never take that option again. I remember being so sick after my treatment days I literally would not be able to get out of bed for days at a time. Sometimes my mom had to drive to Iowa to take care of me. During that same semester, I somehow contracted H1N1, and later got pneumonia. About two weeks after I got out of the hospital, I had emergency surgery on Halloween to have my port removed because it created blood clots that completely blocked off two veins in my neck. That semester was one of the biggest challenges I have ever faced. I somehow managed to become healthy again and finish all of my work on time to get all A’s and B’s!

To date, I’m currently sick of yearly colonoscopies, CT scans every 6 months, and 3 month check-ups with blood draws but aside from that, I’m LOVING life as much as I possibly can. I will be done with school in December of 2011 and I can’t wait for my unknown, next chapter in life! I’m keeping a positive outlook, and I’m busy doing the things that I want to do. This is only the beginning of my journey, and my colostomy is not holding me back.

UPDATE: We are sad to share that Melissa has passed away.