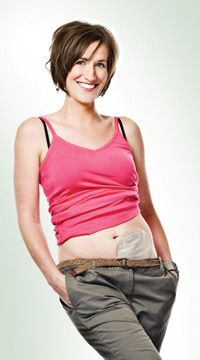 I have been a very healthy individual throughout my life.  I was blessed with parents who taught me good nutrition habits at a young age and encouraged an active lifestyle.  I was involved in every possible activity during my years at Hermantown High School and continued to stay involved throughout my undergraduate career at the College of St. Benedict, where I studied biology and art.  I graduated with my B.A. in the spring of 2007 and immediately started working as a lab tech for a local blood center in Duluth, MN.

I was rarely ever sick, so it was surprising when I began to experience some unusual pain and bleeding that disrupted my normal bowel function.  At first, I wasn’t too concerned.  The Duluth branch of our blood center was being remodeled at the time, so I was temporarily working at the St. Paul, MN location, and my intestines always get thrown off a bit when I am away from home.  I hoped it would resolve itself if I started drinking more water and eating more fiber, but it didn’t.  It got worse.  Eventually, I decided to see a doctor about it, but I didn’t last until my appointment.  Shortly after scheduling an appointment, the intensity of the pain escalated rapidly.  I remember lying on the floor of my hotel room in paralyzing pain, both trying to figure out how to get to the hospital and wondering if I might just die right then and there.

I had no health insurance, so I didn’t want to call an ambulance; I couldn’t even move to reach the phone anyway.  Eventually, the pain subsided enough so that I could get to the phone, and I called my mom.  Thankfully, she was able to get in touch with my grandparents, who lived near my hotel, and they brought me to the hospital.

At the emergency room, I was diagnosed with internal hemorrhoids, given some pain medication and laxatives and was referred to a colorectal surgeon.  I was embarrassed, frustrated that the advice I received was to just continue the diet adjustments I had already been practicing for the past month, and I was exhausted from the stress of the whole situation.

It took about a month to get in to see the colorectal surgeon, and during that time, I continued to work in St. Paul and basically survived on laxatives and prunes.  When my appointment finally came, the surgeon decided that it was definitely not hemorrhoids.  She thought it was a polyp, and we discussed having it surgically removed.  She cautiously mentioned that some polyps are cancerous, but the likelihood of mine being cancerous was very low, considering that I was so young and otherwise healthy.  She approached the topic of cancer almost as a second thought, as if it was nearly impossible, but she had to mention it, just in case.  But looking back on it, that’s when I knew.  I knew this was more than just a benign polyp.  It had caused me far too much trouble.  I hoped I would be able to just have the surgery and be done with it all, but I was scared.

As I awoke in the recovery room after the surgery, my surgeon came in to inform me that things had not quite gone as they had hoped.  They discovered that the “polyp” was actually part of a tumor.  The tumor had extended through my intestinal wall and had invaded the adjacent muscle tissue, causing the excessive pain.  They had removed what they could, but they couldn’t remove the entire tumor because they hadn’t prepared for that extensive a surgery.

Despite the apprehension I had before surgery, I was still completely shocked.  My worrying had not prepared me to hear the actual news.  I had…cancer?  I wanted to cry, but I couldn’t.  The sense of fear and loss permeated my whole being with surprising speed.  Everything I thought I knew about life had been torn to pieces in the matter of an instant.  I was 23 years old.  I had just graduated from college, just started a new job, I was supposed to be building my life, my future…but what now?  What would this mean?  Would I even have a future?

I was admitted into the hospital overnight, so they could run more tests.  I received phone calls, visits from family, social workers, chaplains, volunteers, various oncologists, radiation oncologists, surgeons, nurses…there was a constant stream of people in my room.  I had blood work and a PET scan to see if the cancer had spread.  The results showed that I had cancer in a few lymph nodes right around the tumor, but it didn’t appear to have spread from there.  Thus, my official diagnosis: Stage III rectal cancer.

And the news just kept getting worse.  My surgeon came to visit again the next day, and sat down to tell me that, because the cancer was so low in the digestive tract, the only method of treatment would require a permanent colostomy.  This was even harder to hear than the diagnosis itself.  I did cry at this news.  A colostomy?  Like the old people with the big, crinkly bags?  Would I still be able to do the things I like to do?  Wear the same clothes?  What about food?  Exercise?  Intimacy?  I had so many questions, and I couldn’t find much comfort in any of the answers.

We continued on to discuss the rest of my treatment plan.  I would move home to Duluth to have chemotherapy paired with radiation therapy for six weeks with the goal of shrinking the tumor before surgery.  I would have a couple of weeks to recover and then have the laparoscopic abdominoperineal resection that would remove the tumor and create my colostomy.  After surgery, I would have a few more weeks of recovery and then six months of post-surgery chemotherapy.  It was overwhelming, but at least it was a plan.

There were some other pre-surgery tests to be done: a colonoscopy to make sure there weren’t any other polyps in my colon, a rectal ultrasound to get a better idea of the lymph node involvement, a meeting with a genetic counselor to analyze my DNA for any mutations that might have predisposed me to cancer at such a young age, and consultations with a number of other surgeons to get second opinions about my treatment.  The results?  I had no other polyps, my DNA seemed to be normal, all the other surgeons I met with agreed with my initial surgeon, and I began my first round of chemo and radiation in early January 2008.

In starting treatment, I realized that I was facing even more challenging issues.  The radiation was likely to have long-term side effects such as arthritis in my hips and tissue damage to surrounding organs, including reproductive organs.  The radiation would likely leave too much scar tissue to hope for any remaining fertility upon the completion of treatment.  This was extremely difficult to handle.  There was the possibility of harvesting eggs in an attempt to preserve fertility, but my doctors insisted that it would be dangerous to delay my treatment for the time that would be required to complete these procedures.

The first few weeks of chemo/radiation treatment went relatively smoothly.  I continued working and had few issues with side effects.  But eventually, I became overcome with weakness and the radiation began to burn my skin.  At one point, I had to take a week off from treatment because my skin was so burned that it was peeling, leaving draining wounds.  I was forced to stop working and spend most of my time at home in bed.

My surgery went smoothly, and I was in the hospital for about a week.  It took five or six weeks to recover completely, but my pain was minimal, and I was relieved to be rid of the tumor.

When I had recovered from surgery, I started my second round of chemotherapy.  This time I spent most of every-other Monday in the clinic, having blood drawn, meeting with my oncologist, and receiving infusions of chemo and anti-nausea drugs.  I went home hooked up to an infusion pump, which continued to administer the chemotherapy over the next two days, and on Wednesday I was back at the clinic to get unhooked.  This routine was repeated every-other week for six months with a couple of delays for low white blood cell counts.  Despite the anti-nausea medications, the chemotherapy made me incredibly sick.  It took a few attempts at finding effective combinations of drugs to counter these effects before I had a session that was free of vomiting.  Once we developed a tolerable routine, I starting working part-time again.

I read books, attended cancer support groups, ostomy support groups, grief and loss groups, individual therapy, guided meditation, and had wonderful support from friends and family, my sweetheart, co-workers, my healthcare team and the community as a whole.  Their encouragement helped me walk through one day at a time.  I couldn’t be more grateful for the loving support.

Not long after I completed my treatment, I became a volunteer at the cancer center, spending time with people while they received their infusions.  I began rebuilding my strength and getting used to the “new normal” of my life.  Now I am working toward a master’s degree in nursing, in the hopes of becoming a resource for others who are facing similar experiences.

The emotional recovery was a little more difficult.  It took quite a while for me to accept my colostomy; it had a major effect on my body image and self-esteem.  I tried many different appliances before I found the one that best fit my body and my lifestyle (not big or crinkly!).  I wear normal clothes, I exercise, I have no dietary restrictions…there is really nothing that my colostomy prevents me from doing.  After much physical, emotional, and spiritual healing, I was able to rediscover my sense of identity.  I have grown to appreciate my colostomy as an integral part of who I am, a small scar from all that I went through to be where I am today.

Being a young adult with cancer or a young adult with an ostomy can be an isolating experience.  The most difficult part for me was feeling like no one could really understand what I was going through.  I have received so much energy from connecting with these young survivors, and I hope that, by putting our stories out there, we can bring this sense of fellowship to many more!

Life looks a bit different now, but it is wonderful.