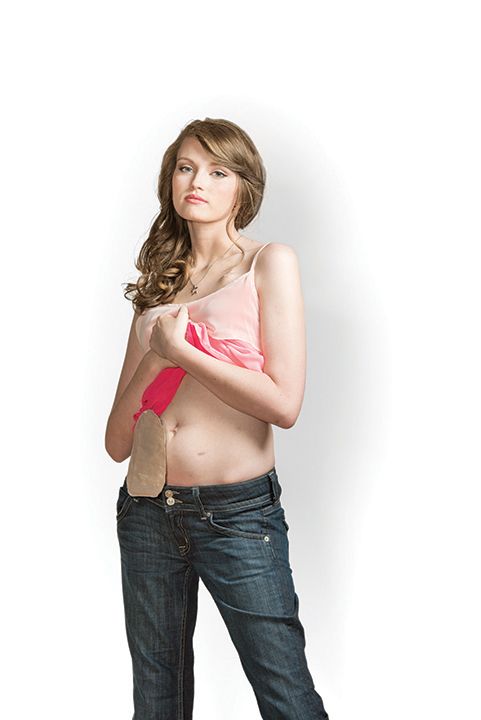 On the evening of July 7, 2014, Maegan found herself in an emergency room deciding whether to have a colonoscopy, one of the last things any 20-year-old would think they would have to deal with. She arrived a few hours earlier with year-old symptoms that had grown severe — excruciating abdominal pain had her doubled over and she had just passed an alarming amount of blood. Scans revealed nothing, but the doctors wanted her to stay to make sure they had not missed anything.

Maegan wanted to blow it off. “A colonoscopy? Isn’t that for old people?” she thought. She came up with excuses to leave — the pain and bleeding were not happening that often, and the fatigue she had been experiencing was likely due to her being busy with college coursework and swim team practices. Couldn’t she just go home? A self-proclaimed “princess,” Maegan admits she was just being stubborn. But, she thought the better of it and stayed for the colonoscopy.

How the emergency room radiologist missed the tumor that was growing in her colon is anyone’s guess — it was the size of a grapefruit. Maegan knew something was wrong when she saw the worried looks on her family’s faces after she woke. She remembers the deafening silence in the room before her mom broke the news, “It’s cancer honey. You have cancer, and it doesn’t look good.”

Maegan was rushed to the Mayo Clinic in Jacksonville, just a few hours away. There, she tested positive for Lynch syndrome, which she likely inherited from her father who was also a young colorectal cancer survivor (he was diagnosed just five months earlier at age 41). Further tests showed Maegan’s cancer had spread to lymph nodes near her lungs and liver — stage IV. The doctors gave her three months to live.

Her doctors laid out a treatment plan, but Maegan was having none of it. “Chemotherapy? I have to do chemotherapy, radiation, surgery, and then chemotherapy again? What about school? My career? I’m going to lose my hair? I’m really this sick? WHAT ABOUT MY LIFE?” She had just struck out on her own and could not understand how her life might be taken away from her so quickly, so easily. She was just so angry and hurt. She walked out of the hospital, stubbornly denying treatment.

Two events caused Maegan to reconsider. First, she consulted with her family, where her sister laid it out for her, “You’re my big sister, what am I going to do without someone taking the blame for me, or someone to argue with, or that someone I look up to the most? I can’t lose you sissy, I just can’t.” Second, on a return trip from Jacksonville with her mom, they turned on the radio after discussing treatment options and the first song that came on was “The Anchor Holds,” a spiritual song about comfort, encouragement and hope. Maegan is a deeply religious person and took this as a sign that everything would be OK. Maegan set her attitude aside and began treatment.

Treatment was rough on Maegan. She lost 35 pounds leading up to surgery that, while successful in removing the tumor, was an 11-hour ordeal that left her with a cut nerve in her right leg. The severed nerve would cause her leg to drag when she walked, embarrassing her tremendously. Treatment also sent her into menopause and her doctors told her she would likely be left infertile. Furthermore, she had an impersonal home nurse and was receiving questionable care from her local oncologist. To top it off, surgery revealed that she had endometrial cancer. It was so much to handle and with very few visitors, she felt so alone and helpless at times. With all of the bad news, it is little wonder that depression took hold.

But the anchor held.

She found an oncologist that gave her the care she deserved. It meant so much to Maegan that her new care providers took the time to get to know her as a person. Maegan also found the story of Danielle Burgess-Ripley, another young female stage IV colorectal cancer survivor (and 2009 Colondar model). She and her mom cried as they first read through Danielle’s story, then story after story of other young colorectal cancer survivors on The Colon Club website. They had found a whole community of young adults who would understand what Maegan was going through. Maegan felt a little less alone and started the “Maegan’s March” Facebook page to share her own journey.

In time, Maegan learned to walk again. She finished up chemotherapy in time to allow her to go to the Colondar photo shoot. There, surrounded by “her people,”
Maegan flourished. Her sugary sweet personality and southern drawl won everyone over. Lest there be any doubt that she made it through treatment no less of a princess than when she began, Maegan co-opted a tiara that another model happened to bring and wore it proudly for most of the trip.

Since the shoot, Maegan’s condition has continued to improve. She had her temporary ileostomy reversed and is hopeful that with time her menopause will reverse itself, as she wants to have kids. She believes the worst is behind her and has no plans to fuss over any future tests or treatment. Or to give up her tiara from “colon camp.” She has faith that the anchor will continue to hold and that someday she will hear five simple words, “Maegan, you are cancer-free.”