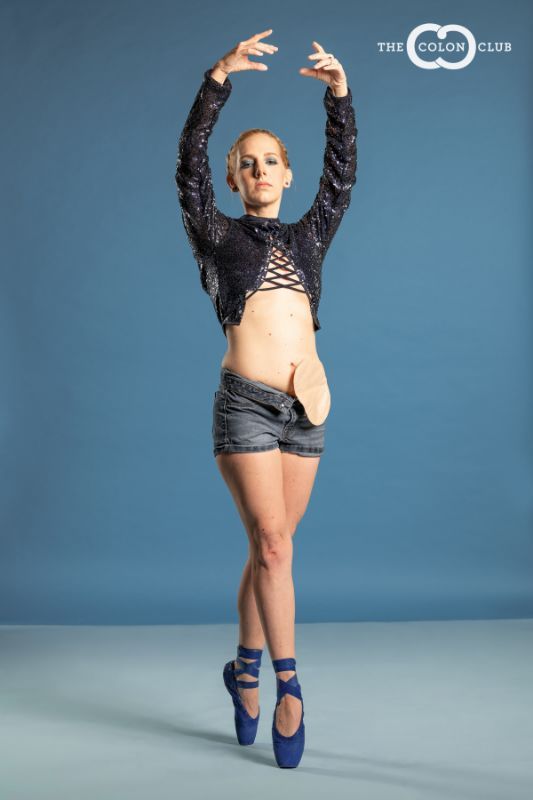 Lisa Johnson lives to love and loves to live. She learned this valuable lesson after the sudden loss of both of her older brothers. The tragedies, which happened 28 months apart, brought Lisa's remaining family closer together. Then in 2010, when Lisa was just 26, the lifelong ballerina, recent college graduate, and newlywed began experiencing symptoms. She had no idea they could be attributed to rectal cancer.

Lisa began experiencing occasional constipation and started taking an over-the-counter fiber supplement. Instead of helping, the fiber made her abdominal cramping and bloating worse. She then noticed a dull ache near her tailbone. It wasn't persistent, so she brushed it off thinking she over-exerted herself at dance. When she saw a small amount of blood in her stool from time to time, she decided to mention it to her husband and mother. Once again, she brushed this symptom off by blaming dance.

Lisa was reluctant to go to a doctor because she didn't have medical insurance. At 26, she didn't qualify to stay on her parents' insurance and as a recent college graduate, she no longer had access to her school's insurance plan. Lisa was due for an annual pap smear and needed a refill on her birth control prescription, so she went to a free women's health clinic. She mentioned to the doctor that she was experiencing bloody stools and the doctor told her she was just constipated and suggested a stool softener.

Over the next few months, Lisa's symptoms progressed, especially the amount and frequency of the bloody stools. The final symptom that literally took her breath away was a sharp stabbing pain in her right butt cheek. She says this was what finally prompted her to make an appointment with her local surgeon.

Lisa will never forget the moment her life changed forever. The surgeon performed a digital rectal exam and it only took him seconds to feel the mass in her rectum on the right side. Three days later, she had her first colonoscopy and a biopsy of the mass. Afterwards, Lisa's doctor encouraged her to apply for Medicaid. She was denied. Within a week, biopsy results confirmed the diagnosis of Stage IIIB rectal cancer. Lisa reapplied for Medicaid, armed with a rectal cancer diagnosis, and was approved.

Lisa's treatment began with a 5FU infusion of chemotherapy and pelvic radiation for six weeks. Her doctors were hoping to shrink her tumor before surgery. Unfortunately, chemo didn't shrink the tumor, instead radiation had changed the shape of the tumor, forcing it to grow toward her vagina.

In a laparoscopic surgery, the tumor and multiple lymph nodes were removed and cancer cells were scraped from her vaginal wall. Waking up from surgery with a permanent colostomy as a newlywed and dancer was, at the time, devastating. She asked her husband to set the timer on his phone for 20 minutes, kicked him out of the room, and threw a pity party. She lamented, screamed, cursed, and cried. Then when the timer went off, she looked down at her stoma and thanked it for saving her life.

Chemotherapy resumed once she recovered from surgery. Lisa had one clean scan after completing six months of FOLFOX. Two months later, the cancer was back. A second more invasive surgery consisted of a tumor resection and removing some lymph nodes, her tailbone, ovaries, uterus, and vagina. All this was followed by an external pelvic reconstruction using healthy muscle and tissue taken from the inner thigh.

When the surgeon was finished, he came out of the operating room to speak with Lisa's husband. He explained to Chad that because of the prior involvement with Lisa's vaginal wall during her first surgery, and the fact that she had a recurrence so soon after her initial diagnosis, removing the entire vagina was necessary and would eliminate the chance that any potential future cancer could travel to her vagina. The doctor also explained that sexual intercourse would not be an option until internal reconstruction was performed - something he decided to defer after having her on the operating table for ten hours. He recommended that internal reconstruction should wait until Lisa was in remission for at least five years and warned that there was chance it might be considered cosmetic by the insurance company. After Lisa recovered from surgery, she and Chad worked together to find creative ways to maintain intimacy and ultimately, she says it brought them closer as a couple.

With the help and support of her family, Lisa completed chemotherapy and has been NED since 2012. Lisa insisted her whole family have colonoscopies after her diagnosis and shockingly, her mom was diagnosed with Stage I colon cancer. Lisa's insistence may have saved her mother's life! According to the American Cancer Society, the five-year relative survival rate for people with Stage I colon cancer is about 92 percent.

Lisa has returned to the world of dance, teaching at the same dance studio she attended as a student. She thinks it is vital for people to know that having an ostomy, although intimidating at first, in fact isn't much different than how she lived her life before. I have always expressed myself through movement and dance and I wasn't going to allow something that literally saved my life to keep me off my toes or change the person I had been for 26 years. I'm now not only passionate about helping raise awareness for early onset colorectal cancer, but I also want to fight the stigma for my fellow ostomates. Dance has always been my art and my body has always been my brush, now my brush is just accented with bag!