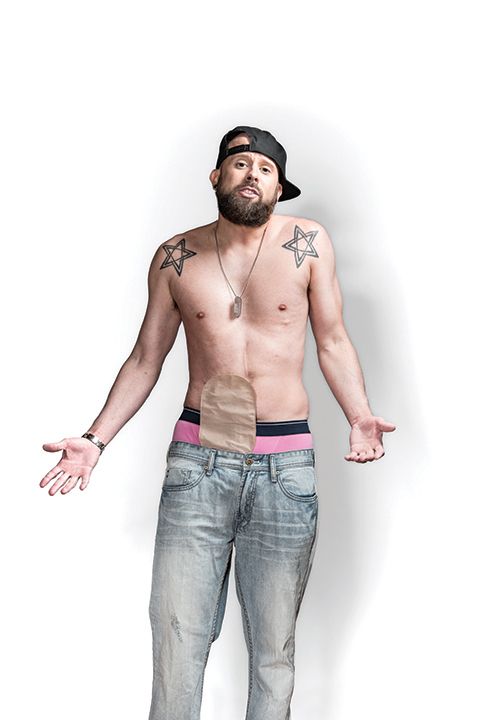 Kristofer “Kris” Thompson was born in Washington, DC and raised in Potomac, Maryland. Kris is a talented writer with a blog called “Papa’s Got a Brand New Bag”

that lets you have a glimpse into his world. When you read it, you can see he is a sensitive and thoughtful guy who has suffered so much loss in his young life.

In 1996, when most of his friends were trying to survive their first year of college, Kris was just trying to survive. A month after graduating from high school, Kris went for his first colonoscopy because his grandmother, mother and uncle had all been diagnosed with Familial Adenomatous Polyposis (FAP), an inherited disorder known to cause colorectal cancer. People with the classic type of FAP may begin to develop multiple noncancerous (benign) growths (polyps) in the colon as early as their teenage years. Unless the colon is removed, these polyps become malignant (cancerous). This was to be his first routine screening for FAP, but it turned into a nightmare. Kris’ colon was full of polyps and deemed unsalvageable. No time was wasted in scheduling Kris for a total colectomy and temporary ileostomy. Kris remembers waking to his grandparents and “an entourage of white coats” in his hospital room following surgery. His surgeon said, “Kris, we found a tumor in your rectum during the surgery.” The surgeon informed him he had stage III colorectal cancer. In shock and unable to fully comprehend in his 18 year old brain what he’d just heard he said, “Gramps, I am going to lose all my hair!” His grandfather reassured him by saying “Kris, don’t worry, we’ll get you the best wig money can buy.” Looking back, Kris is amazed that his grandfather was able to console him and tell him the things he needed to hear, all while trying to process the severity of the situation himself.

Kris never knew his father and due to his mother’s struggle with schizophrenia, he was raised by his maternal grandparents, with whom he had a great relationship. He and his uncle, who also had FAP, were very close since they were raised as brothers. Kris’ uncle, a priest, struggled with depression and committed suicide when Kris was 22 years old, leaving him devastated. Kris is not ashamed to talk about his own Obsessive Compulsive Disorder (OCD) and panic disorder. Kris sees a psychologist regularly and is passionate about removing the negative stigma surrounding mental illness. He believes talking about it will help break down barriers and urges people to seek help rather than suffer alone.

Kris’ two best friends have been with him through everything. One never treated him like he was sick, making him feel like a “normal” teenager. The other was his shoulder to cry on. He is so thankful for their love and support. He says having a support system is crucial. A sensitive and thoughtful guy, Kris wears his heart on his sleeve, and makes sure to let the people who are important to him how know much he loves them.

Unfortunately, Kris’ health challenges didn’t stop with colorectal cancer. FAP complications and side effects of treatment continue to plague him to this day. His temporary ileostomy was reversed in a J-pouch surgery a few months after he finished chemotherapy and radiation, until he developed anal stenosis. He underwent a sphincterotomy but it didn’t offer any relief, so after 10 years of suffering, Kris elected to have permanent ileostomy surgery. No longer embarrassed of his ostomy, Kris says, “If I could be the ostomy poster child I would. I want people to be confident in themselves and with their ostomy. Ostomy awareness is huge to me.”

Another complication Kris has is Radiation Cystitis, which is one of the most common side effects to radiation treatment of the pelvic area, and can cause inflammatory changes in bladder tissue. For the last 19 years, this has frequently caused Kris a great deal of kidney and bladder pain, and is accompanied by occasional incontinence, or the reverse, urine hesitancy.

Due to reoccurring polyps on his bile duct, pancreas and gallbladder, Kris underwent Endoscopic Retrograde Cholangio Pancreatography (ERCP) twice and ended up in the ICU with internal bleeding less than a week after the second one. Faced with an unknown number of ERCPs, his doctors suggested he undergo the Whipple Procedure. This complex surgery is known mostly for its connection with patients who have pancreatic cancer, but is also a viable alternative for FAP patients who have excessive amounts of polyps. In Kris’ case, surgery entailed having his gallbladder, six inches of duodenum and 15% of pancreas removed.

Twenty years after his original stage III colorectal cancer diagnosis, the effects of FAP, cancer and treatment have remained and will continue for the rest of his life. Kris is still standing and looking forward. He is cancer-free and considers himself lucky to be a survivor.

Kris wants everyone to know, “Cancer doesn’t end when treatments are over, but there is life after cancer.” He credits his support system of God, family and friends’ unconditional love with saving his life. He says, “Cancer did a number on both my mind and body, but through it all I am still here. I’ve said it before, and I’ll say it again, it’s not our afflictions that define us, but how we choose to deal with them.”