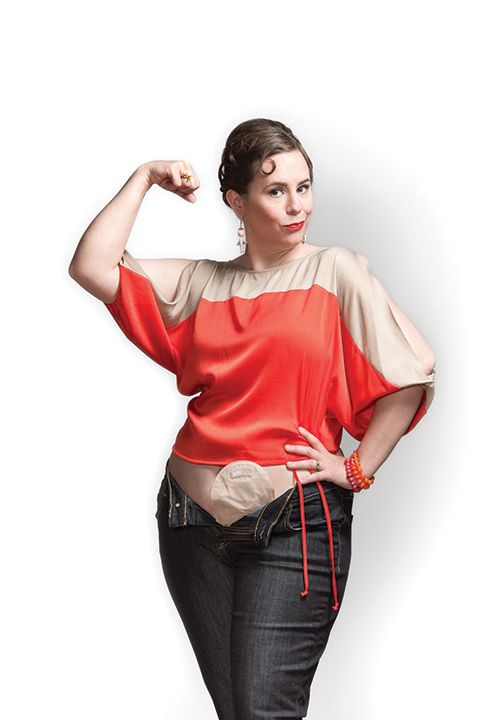 Katie Lee has a huge and wonderful personality, using words like “Amazeballs” in her daily vocabulary. Born and raised in Portland, Oregon, she could easily step out of a Portlandia episode because she is so authentic. But unlike most of the meant-to-be-annoying characters, she would play a most endearing and likable one. No one has a bigger zest for life than Katie, which makes it hard to believe her body may have other ideas. She was diagnosed with two autoimmune diseases in her twenties (pernicious anemia and rheumatoid arthritis), and was also diagnosed with stage I rectal cancer at the age of 33. Katie uses humor when she talks about it, saying “My body hates me. It really hates me – it’s trying to kill me!” Luckily Katie was diagnosed early, unlike many young adults with colorectal cancer who are typically diagnosed at later stages. Katie believes her autoimmune diseases actually helped make her doctors pay more attention. Her story is a textbook case for early detection.

In March of 2014, Katie and her family went to St. Louis to attend a friend’s wedding. It was a special trip as the groom was a former roommate of Katie’s husband from his days in the Marines. Other military friends were flying in from all over the country to attend. Halfway through the weeklong vacation, Katie noticed quite a bit of blood when she went to the bathroom. Both she and her brother had experienced hemorrhoids from a very early age, so discomfort was nothing new. But this time it was very different. “I’ll never forget the first time I saw the blood,” said Katie. She knew something was very wrong based on the dark maroon, ribbon-looking blood she saw in her stool. The fact she had given birth to her daughter Virginia just seven months earlier, along with her autoimmune diseases, gave her reason for even more concern.

Katie talked to her mom as soon as she got home and she encouraged Katie to see a doctor. Her mom was diagnosed with stage II ovarian cancer when Katie was 20 years old, and Katie remembers vividly when she went through chemotherapy. Her mom also has MS and psoriasis, so this family has dealt with more than their fair share of health problems. Even though Katie tested negative for Lynch Syndrome, a genetic condition that increases the risk of colon cancer and other cancers, Katie knows there are other genetic factors in her family. Her older brother has been diagnosed with diverticulitis, along with two uncles who’ve had colon resections because of it. Katie also found out that a cousin she never knew was diagnosed with colon cancer at the age of 40.

Katie continued to have rectal bleeding and saw a doctor a couple weeks after they returned from vacation. When a fecal test revealed blood, she was immediately referred to a GI specialist who scheduled her for a colonoscopy a few weeks later. Katie’s dad took her to her colonoscopy on April 10, and the doctor seemed shocked when she removed four polyps. They would know more after the biopsy came back the next day.

Katie waited anxiously to hear the biopsy results and said she will never forget sitting on the couch with her 8-month-old daughter and 8-year-old son when she got the phone call to tell her “It’s cancer.” She immediately went to the other room so her son Garrison wouldn’t get scared by overhearing the conversations. She called her husband and her mom. Katie said it was really hard telling her family. Even though her mom’s cancer happened many years ago, it felt like they were going through it all over again.

After receiving conflicting treatment information from her original surgeon, Katie decided to seek out a second opinion and she is forever grateful for doing so. A new MRI was inconclusive as to whether or not her rectal lymph nodes were enlarged, so the decision was made to do surgery to figure it out. Katie also had to decide whether she wanted to have her bowels reconnected or go with a permanent colostomy. Her new surgeon explained everything very well and even showed her an interactive slide show that helped answer a lot of questions about rectal surgery and the choices she had to make. After some lengthy discussions with the surgeon, her family, and other Colon Club survivors, Katie decided that a permanent colostomy was the best choice. She had the surgery to remove her rectum on June 9, 2014. The surgeon thought he saw cancer on Katie’s liver, but thankfully when they biopsied it, it turned out to be a benign bile duct tumor. Zero out of 16 lymph nodes tested positive for cancer, so all-around good news for Katie’s diagnosis and her future.

Adjusting to a permanent colostomy has been challenging for Katie, but being around for her kids is more important to her than anything and she believes this gives her the best odds of survival. Katie again uses her humor when talking about the disease and surgery. She has formed a colorectal cancer awareness team called “Sto Mama From the Train,” joking about her stoma and keeping it light — something this wonderful woman with a big personality will probably always be able to do. In doing so, she’ll be a great advocate for colon cancer awareness and helping others be diagnosed early like she was. According to the American Cancer Society, a person diagnosed with stage I colon cancer has a 92 percent chance of surviving 5 years, compared to an 11 percent chance of 5-year survival with a stage IV diagnosis. Katie and her story will help save lives.