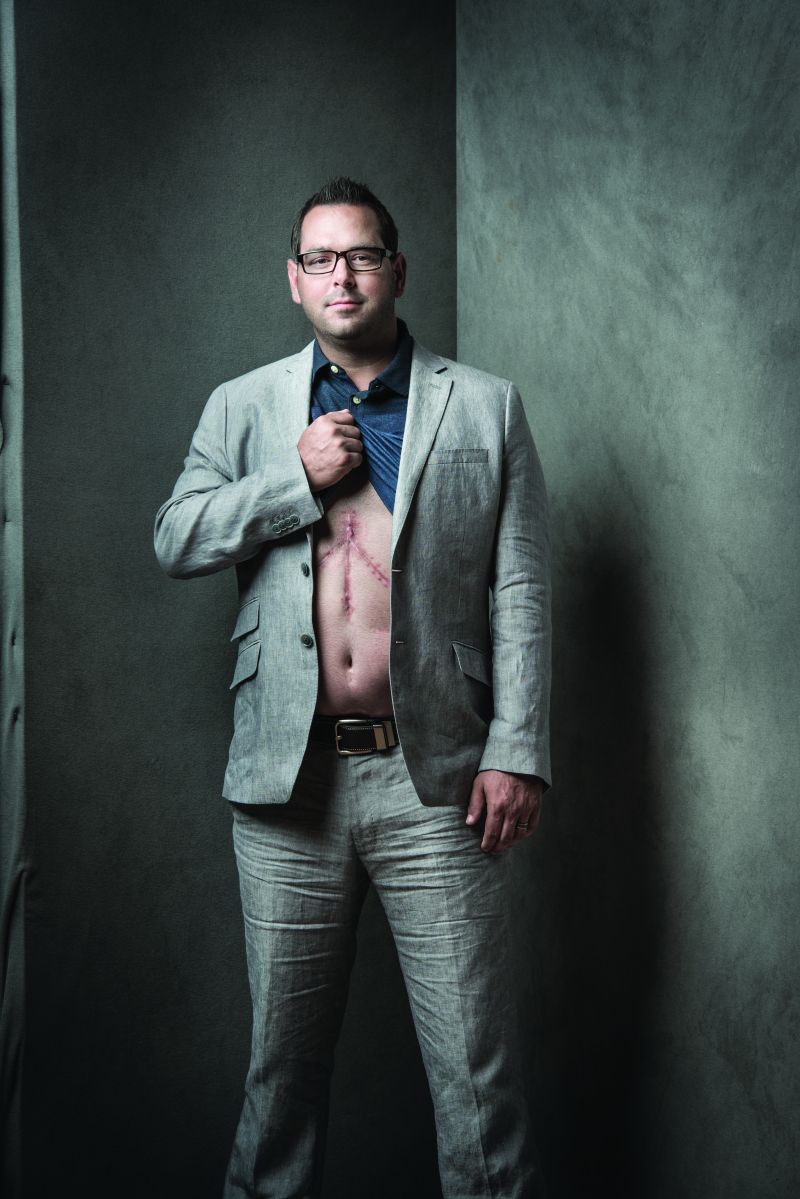 Josh Lambeth’s gastrointestinal symptoms started to become more noticeable right before his wedding day. He’d met his wife, Megan, in 2012. It was love at first sight; they were engaged only five months later and married in May 2013. Today, he calls it a fateful decision.

Despite the warning signs, he’d delayed seeing a doctor, since his job didn’t offer health insurance. Within days of returning home from their honeymoon, Josh saw his first gastrointestinal (GI) specialist, who immediately offered a colonoscopy. It was exactly what Josh and Megan were hoping for. They knew something was wrong; the test would tell them what it was. As both a wife and a medical doctor, Megan knew his symptoms were cause for concern.

Thirty-nine days into their marriage, Josh was diagnosed with Stage 2B colorectal cancer (CRC).

His reaction was anything but typical. The afternoon he was diagnosed, Josh thought to himself: “How can I make this experience as positive as possible? How can I help as many people as possible along the way?”

These were not just idle thoughts. That very same day Josh started reaching out to contacts to put on a fundraiser to raise financial support and awareness.

“I wasn’t even thinking about what we were getting ready to face,” he recalls.

Where did this reaction come from? His faith. “Looking back I had always prayed that God would use me to help other people. I never in a million years thought that his plan for me would be a cancer diagnosis. More good has come out of my fight with cancer than I ever would have imagined. I love helping other people and my diagnosis has given me a direction and a focus,” Josh says. “My goal is to help as many people as I can, while I can. And that makes me happy.”

He decided to work with the NHRMC Foundation connected to his local hospital, the New Hanover Regional Medical Center. The day he was diagnosed, he immediately began to followe up his plans with action. Since then, he has helped the Foundation raise over $70,000.

During his advocacy work, Josh’s cancer went through cycles of positive and negative news. After he finished standard chemotherapy and radiation with hopes of a Stage 2 cure, Josh and Megan celebrated their one-year anniversary with a drive down California’s Pacific Coast Highway. Each time they saw good waves, Josh would go surfing, a lifelong passion which he has continued to enjoy as a cancer survivor as a piece of precancer normalcy in his life.

Three months after this celebratory drive, Josh’s cancer returned in his liver. He was now Stage IV.

Josh was devastated, this news hitting harder than the original diagnosis. The day he found out, he was at a “Pink Ribbon Project” video shoot to support breast cancer patients. By chance, during the video shoot, he said his biggest fear was his cancer coming back. Minutes later, he got the call from Megan with the news.

The first two days after receiving the recurrence news felt like a bad dream. On the third morning, Josh got down on his hands and knees in the shower and just prayed, asking God to “take the fear away.”

With that, his fear melted away and he refocused on his passions: Megan, doing what it takes to beat cancer, and his advocacy. With guidance from his physician wife, Josh’s care was transferred to the world-renowned CRC liver metastasis expert Dr. Nancy Kemeny at the Memorial Sloan Kettering Cancer Center, quickly treated his recurrence through surgery, chemotherapy, and a procedure Dr. Kemeny is a leading expert on: the HAI-chemotherapy pump. The treatment gave Josh a period of no evidence of disease for nine months. A second recurrence led to additional liver surgery and similar therapy.

Today, Josh shows no signs of disease in his CT-scans. Even after multiple surgeries, his liver has regrown back to its original size.

The pillars of Josh’s life continue to this day: Megan, faith, and his desire to be the strongest patient advocate possible. And he knows these pillars are interconnected. “If it weren’t for Megan, I wouldn’t be here. I wouldn’t have gone to the doctor until it was too late. I wouldn’t have had insurance. I wouldn’t have been treated by Dr. Kemeny,” he says.

Without his wife, Josh wouldn’t have tried to start a family through the adoption process. Without her, Josh would not be continuing his advocacy mission, excited to work with the Colon Club. Already he is planning: more fundraising concerts, a gala event for CRC Awareness month in March, and setting up a system of “chemo buddies” at his local hospital.

“I know that God sent Megan into my life, and she has been my living guardian angel,” Josh says.

Through his advocacy as a Stage IV CRC survivor, this guardian angel’s influence is reaching many more than just one survivor.

Cool fact — they gave Kinsley the middle name Ellen after Dr. Kemeny's middle name, since Dr. K is a driving force of how and why Josh is still alive.