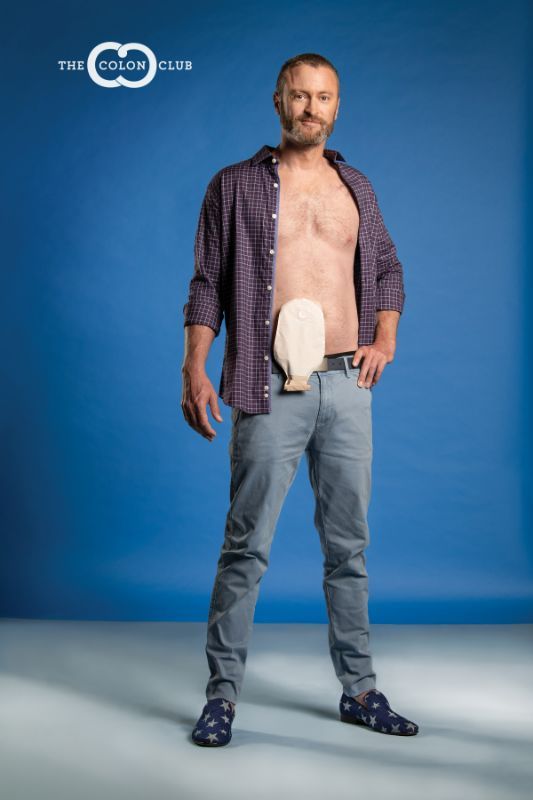 In 1993, John Fritz was nineteen years old and three weeks away from starting his college career at UC Davis when he was diagnosed with Crohn’s Disease. In addition to trying to navigate life at college, John was dealing with a chronic disease. He said about that time, “Those first few months were not easy. But by the end of my first quarter, I could tell you where every bathroom on campus was located. I was on my way to living with Crohn’s.”

According to the Crohn’s and Colitis Foundation, Crohn’s Disease is a form of inflammatory bowel disease that generally affects the small bowel and the beginning of the colon. However, this chronic inflammation can impact any part of the gastrointestinal tract. Some of the symptoms of Crohn’s are persistent diarrhea, rectal bleeding, abdominal cramps and pain, constipation, an urgent need to move bowels, and a feeling of incomplete evacuation. Crohn’s disease also increases the chances of developing colorectal cancer.

Adjusting to his new life was not easy. John found the side effects from the medicines prescribed to combat his Crohn’s were taking a toll. He had terrible joint pain and was prescribed pain medication. The pain medication led to lower testosterone levels, so he had to get injections to counteract it. These shots gave him insomnia. John called it, “a long rabbit hole of meds.” After many years of doing the standard of care prescribed by his doctors, John decided to take a different approach. He began using CBD oil (a form of medical marijuana), changed his diet, and then returned to the gym when he was able. This worked well for him, and he was feeling the best he ever had since his Crohn’s diagnosis. However, he was not comfortable talking to his doctor about this new treatment because of the stigma attached to cannabis. After being diligent about his annual colonoscopies, he skipped his scope for three years because his Crohn’s was under control and he did not want to have the conversation with his doctor about his alternative treatment method.

John noticed he was losing weight more easily since he started exercising again, but, as he put it, “Who is going to complain about that?” In December 2016, things started to change. He experienced a sharp pain in his rectum after a workout and was not surprised to find blood in his toilet the next day. He assumed it was the beginning of a Crohn’s flare and took the steps needed to get it under control. But his symptoms persisted. John explained, “I was able to convince myself for the next few months that the bleeding wasn’t regular, and the pain was tied to my lower back. Like it or not my next colonoscopy was going to burst that bubble.”

John received a late-night message from his doctor telling John to contact him immediately about his colonoscopy results. Although the test showed that his Crohn’s was completely under control, he had a 5.5-centimeter tumor in his rectum. An MRI confirmed it had spread to his lymph nodes, and he was diagnosed with Stage III rectal cancer.

John started chemo-radiation right away to start treating the cancer. He stopped working and focused all his energy on the days ahead. He found his stress level reduced greatly when he went on leave. Yes, he had cancer, but not having to worry about his employment was a great relief for him.

John’s biggest concern about his diagnosis was not the cancer itself but having an ostomy bag. He had some personal experience that lead to his apprehension. John explained, “The same year I was diagnosed with Crohn’s, my dad was diagnosed with Stage II colon cancer. My dad was not happy about having the bag, so I was worried I would have the same experience.”

After surgery, the first week with his ileostomy was rough for John. His wife, Maida, helped him while he adjusted to life with an ostomy. One night, he got up and cleaned the bag himself and found some peace. John said, “Sitting alone in the bathroom at 3 A.M., I realized I was taking the first step in adjusting to my new body. The next eight months with this bag wouldn’t be the nightmare I expected. I never thought I’d be able to utter these words, but if my takedown surgery doesn’t go as planned, I can live happily with this bag for the rest of my life.”

John found positives he didn’t expect through dealing with cancer. He has been surrounded by an outpouring of support from his friends and uses humor to help him heal. He has also spent more quality time with his wife and children, Kevan and Sydney. He did not think it was possible to become even closer with his wonderful wife, Maida, but the past year has proven him wrong. John said, “It’s tough to be mad at life, cancer or not, when you get to spend it with the person you love most.”

John hopes his journey will help other Crohn’s patients, and he has some advice. “Find what works best for you. CBD oil was a good alternative for me, but doctors don’t always talk about it. Whatever you do for treatment, do not skip your screenings.”