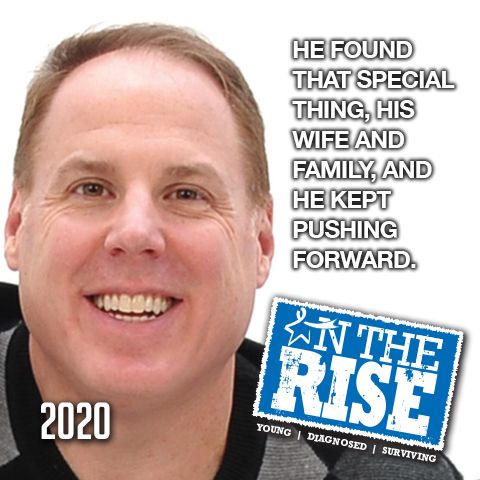 It is May 2, 2019, and Sharon Huber welcomes me into her family’s home. I’m here to interview her husband, Jim Huber, a stage IV colorectal cancer survivor who was invited to attend the 2018 “Colon Camp” but couldn’t make it due to his health. Sharon has graciously provided lunch and invites me to eat while she gets Jim ready. In between bites, I take in the living space and see the signs of a happy, loving family: family portraits, pictures of their kids decked out in sports uniforms, and a refrigerator covered in artwork with a “Welcome Home” sign featured prominently.

I enter the bedroom and see Jim for the first time. Jim has weathered a grueling journey since receiving a diagnosis of stage IV rectal cancer two and a half years ago at the age of 45. He has endured HIPEC and multiple other surgeries. He has had his rectum, prostate, and bladder removed, leaving him with a permanent colostomy and urostomy. He has a nephrostomy due to kidney issues and a temporary jejunostomy to give his leaking colon a chance to heal. Tubes snake out from under the bedsheets to a wound VAC to help close an open wound from a recent surgery.

Despite his condition, Jim has graciously agreed to meet. I start by commenting about the adversity he’s faced. Jim says, “It’s tough. There’s no doubt that some days the dark side wins.” “But,” he continues, “you’ve got to find that one special thing that means the world to you to keep you pushing forward.” For Jim, that one special thing is family: his wife, Sharon; his son Braden (8) and his daughter Fallon (6).

Jim and Sharon’s social media feeds are full of testimonials of how much they love each other. Jim says, “I didn’t need cancer to know that I had picked the right person to marry, but having cancer certainly confirmed it.” Jim fights to reach the next goal he’s set involving his children. “I want to live to see them get on the bus for their first days of school and to get off the bus again for their last.” Braden wants his Dad coaching him again in baseball, so Jim’s fighting to get back on the bench. Fallon wants her Dad to take her to lunch, so he’s fighting for a date with his little girl.

Jim knows first-hand the importance of knowing the symptoms of colorectal cancer. Like most early-onset colorectal cancer survivors, Jim had symptoms that he accepted as being normal for years. He went to get a colonoscopy only after learning that a friend his age with similar symptoms had received a colorectal cancer diagnosis.

Jim also knows the importance of knowing your family’s health history. His grandfather had had colorectal cancer at age 37, but Jim learned of this only after receiving his own diagnosis. “I remember telling Dad about blood in my stool, and he said that he also had blood from time to time. Had I only then been told about my grandfather, I would have gone in for a colonoscopy a year and a half earlier, and I wouldn’t be in this position.”

Jim, an optometrist, is a devoted caregiver and many of his patients have become his friends. As word got around about a well-loved eye doctor recently diagnosed with cancer, Jim discovered that survivors were seeking him out. Many just wanted to see a doctor they felt they could relate to, and Jim would often talk to his patients about their cancer journey well after they finished discussing their eye care concerns.

Sharon breaks into our conversation. I look at the clock, see that Jim and I have been talking for over two hours, and understand why so many people love Jim. There’s an ease in talking to him. Despite being in pain, he’s been nothing but thoughtful, generous, and kind.

Sadly, Jim passed on July 13, 2019. Although, Jim was unable to attend “Colon Camp,” he’s as much a part of The Colon Club family as any survivor who has attended over the years.