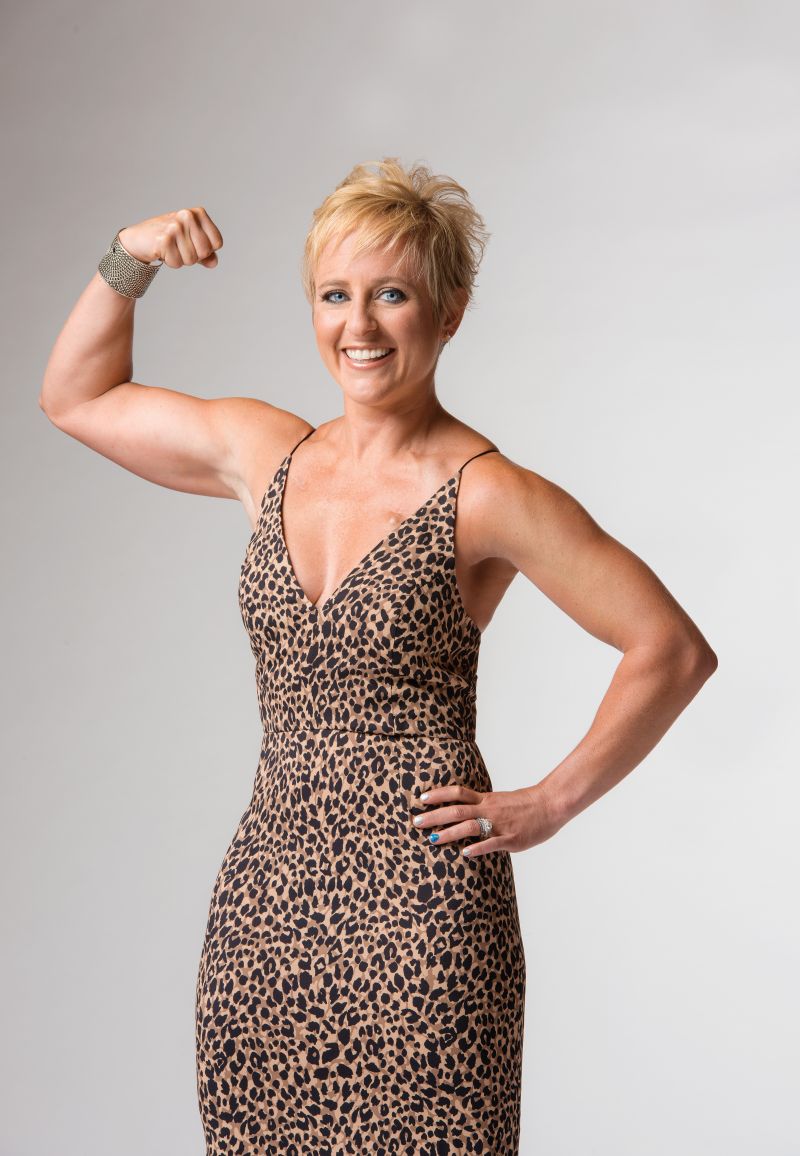 Family is everything to Jessica. What makes the definition of family unique to her is that she has several of them as a direct result of her Stage IV rectal cancer diagnosis.

At 32 years old, Jessica was the epitome of a healthy person. She got physicals yearly, went to the dentist every six months, worked out regularly, and ate a healthy diet. When she began having blood in her stools, her gastroenterologist dismissed it, saying it was because she was a runner.

Jessica was alone in the doctor’s office when she first received her diagnosis. She was devastated and immediately looked to her family, including her then-boyfriend Aaron, for comfort. The diagnosis was a complete shock to Jessica, but she would never truly be alone in her struggle.

She called her boss (who she describes as “like a brother”) to tell him the news. He immediately told her she needed a second opinion and got right to work with his connections to get her one. Because Jessica works in the dialysis field, her boss was able to put her into contact with a doctor at MD Anderson Center, in Houston.

At the same time, Jessica also had the support of a friend in town, one of the many there who are like family to her, since her immediate family lives an hour and a half away. Her friend knew a radiation oncologist at MD Anderson as well. It took a week for the appointment to be made and for Jessica to fly from her home state of Michigan to Houston.

At MD Anderson, Jessica met Dr. Eng, who would eventually be such a close friend Jessica would invite her to her wedding when she married Aaron. The plan was to put Jessica on aggressive chemotherapy for 12 rounds in Michigan and get a CT scan at MD Anderson to determine if she could get surgery on the tumors that had spread to her lungs and liver. When Jessica asked about the oncologist to contact back home, she felt a bit defeated. However, as she walked down the hallway after the appointment, Dr. Eng suddenly came running after her and let her and said, “I called him!” From that moment on, a true friendship developed.

Back in Michigan, Jessica met Dr. Philip at the Karmanos Cancer Center, in Detroit. She was scheduled for her port-a-catheter surgery the day after her birthday. Her experience there couldn’t have been more positive. “I had the best time getting my port surgery for cancer because the staff made it so fun!” Jessica recalls.

The nurses, along with Dr. Philip, quickly became another family of support for Jessica in her journey of cancer. In fact, one of the nurses still sends Jessica an inspirational quote everyday.

In November 2015, Jessica began chemo to shrink her tumors. In February 2016, she was ready to go to MD Anderson to have them removed when two days before her scheduled surgery, she learned that her cancer was inoperable. She would need three separate surgical procedures, and would have to be off chemo for so long that they were afraid the tumors on the other lobe would grow. Jessica’s many families of support allowed her positive attitude to shine through, letting her see that surgery may not be the only cure for her.

“Each day no matter what news I receive, I see the light in my situation. Whether it is meeting some amazing nurses and doctors, or meeting other patients and hearing their stories, or receiving such amazing support from friends – old and new— and family, there is light in this dark situation every single day,” Jessica says. “Even though I have cancer, I am still truly blessed every single day.”

Instead of surgery, it was decided then that Jessica would receive a less aggressive dosage of chemotherapy to remain stable. Because she handled the chemo without any problems, she returned to her healthy lifestyle pre-cancer, training with her Cross Fit family. She works out regularly and continues to work full time with her encouraging work family.

Jessica now credits her many families in helping her become and stay positive throughout her cancer experience. Through their support, Jessica continues to find her voice in order to share her story and her positive outlook with others. She knows that while her cancer diagnosis could be considered a bad one, like anything in life, you should learn from it, grow from it, and be an example to others.

“Yes, I have Stage IV cancer, but I am living with it, not dying of it. I am living my life to the fullest,” she says. “Are those without cancer doing the same thing? I sure hope so.”