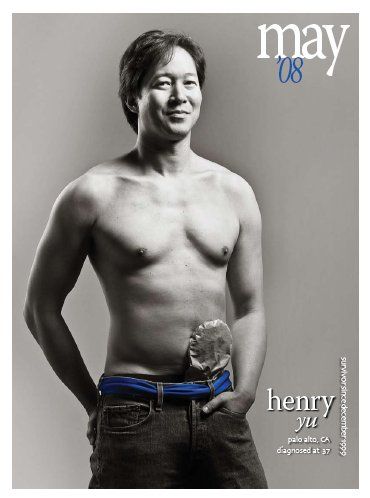 One late night in December 1999, hours after I announced to some friends that the cigarette I had just smoked would be my last, I woke up to go to the bathroom only to fill the bowl with bright red blood. I had just gotten back to Portland from a month long trip to Vietnam and Thailand a few days earlier, and my first thought was it had been something I had eaten. Maybe it was the water buffalo curry I had on that little island?

After a call to the emergency line, I was told to see my doctor the next morning. A digital rectal exam uncovered a low lying tumor. He could feel it. My thoughts ran back to the intermittent bleeding I had had during the past decade, dismissed by doctors as internal hemorrhoids. Could there have been any connection?

The next day, I was to see a GI, a gastroenterologist. He felt the mass and immediately wanted me to do a sigmoidoscopy, which meant having to do an on the spot bowel prep with enemas. After the sig, he didn’t even sit me down first. He just said it: “You probably have cancer.  I can feel the tumor and it’s gritty, and that is what cancerous tissue feels like.” It was so matter of fact. I wanted to strangle him. I was only 37. I thought back and remembered having ribbon-like stools. Maybe the tumor had been causing that.

Fortunately, the sigmoidoscopy uncovered nothing more than the original mass. Still, my GI scheduled a colonoscopy for the next day. I spent the rest of the day doing the prep. That too, showed nothing more. Furthermore, a biopsy taken from my tumor showed severe displaysia, a pre-cancerous condition, but no actual cancer cells. So at one point, I actually got a call informing me that I did not have cancer!

This notion was quickly dispelled as I got the results of my endorectal ultrasound. There it was, a dark spot in the photograph, the darkness permeating through the concentric rings. They could stage the cancer now, Stage II B meaning there was a tumor with the cancer spreading through the rectum wall, but the surrounding lymph nodes looked clear. They took another biopsy, which again showed no cancer cells. Regardless, a CT scan was ordered.

After the entire battery of tests and biopsies, over the course of a couple of rollercoaster weeks, a doctor weighed in with his final verdict. The biopsies didn’t matter. I have cancer. The tumor had grown slowly, over a period of 5 years or so, he figured.

With no family history, my doctor labeled it “spontaneous.” I could only look back with regret on what was an obviously unhealthy lifestyle I had the past few years. At the startup company I was at, I had been completely overworked, overstressed and badly nourished. I had picked up that smoking habit to cope with the stress. While the startup had a modicum of success, that entire journey seemed hardly worth it.

My sister Debbie is a venture capitalist in biotech. She used her connections to track down the best surgeons, one of whom was at Stanford. I locked up my house in Oregon, packed up a few cherished belongings and did the long drive over a snowy pass from Portland to the Bay Area just after New Year.

At Stanford, they made me take all my tests over again. Again, the biopsy did not show any cancer cells. Yet they too said they were sure I had it. They suggested I start with radiation and chemo before surgery. After that, they would reevaluate the situation. The point was to try to save the sphincter by first shrinking the tumor with the radiation to gain some margin for surgery. However, based on where the tumor was, it was a long shot. Without that margin, I would end up with a permanent ostomy.

The first order of business was to bank some sperm, since the radiation would surely render me infertile. I would start to understand that the ramifications of treatment would not be just of discomfort, but some permanent.

The next thing was having a piccline put in my arm, and then a small pack infusing the 5FU and Leucovorin attached. I remember attending a cocktail party that night with this apparatus strapped onto me.

While the chemo was tolerable, the radiation was hellish. It was like getting burned. I moved from my sister’s ex-boyfriend Joe’s apartment nearby over to the Lucille Packard patient apartments just a block away from the hospital. My mom came to care for me. Eventually I walked around with just a towel on it hurt so badly. Luckily, weekends and holidays were off.

I joined the young person’s cancer support group at Stanford. It opened my eyes up to the struggles people had as survivors as well as those still fighting the fight. It really helped me.

The six week waiting period between the end of chemo and radiation, and my surgery, were actually wonderful. I lived it like it was my last six weeks on earth. I felt good enough to go rock climbing, as well as join my sister and her boyfriend in social events. I spent time with friends.

Nearly a month into the wait, my surgeon called to say that he could no longer do my surgery as he had quit his job! This was a huge blow as he was the primary reason for my coming down to California in the first place. This led to a scramble to find another surgeon. Fortunately, a great surgeon at UCSF agreed to do my surgery.

The bowel prep was hard. The next morning, I was white as a sheet, nervous. My surgery started with an epidural. The five hour surgery, an abdominoperineal resection, involved removing the sigmoid colon and rectum. After my surgery, I couldn’t feel my legs. It turned out the epidural had some complications. A week later, I took my first steps. It took me some time before I could walk more than just a couple of steps. It was pretty painful. After a couple more days, my bowels finally started working again, so they let me eat. My first meal was a hamburger and fries!

After leaving the hospital, I felt fragile, much less barely able to walk. That night, my sister and dad went to her boyfriend’s house for a dinner party, while my mom stayed home with me. I didn’t feel right all evening. I kept feeling worse. Finally, I started throwing up bile. My mom was frantic and called everyone home. The hospital told us to hang on, and go back there in the morning. They told me that my bowels had gone “back to sleep”.

When I got out three days later, I started having bad headaches. Walking was hard enough, but the headaches were crippling. Another trip to the hospital uncovered that I was suffering from an epidural headache for which a blood patch was needed. A blood patch involved using an epidural needle but drawing blood first and then injecting it into my spine to push out enough fluid to rectify the imbalance. Fortunately it worked immediately.

A couple weeks afterwards, I got sick again, this time throwing up blood. My sister was sure it was pizza, but sometime later, I started throwing up blood clots so she called the ambulance. She told them I was too heavy to carry herself, so they sent some real brawny guys with an ambulance and a fire truck. They shook their heads when they saw a 130 pound sapling. I went to the emergency room, where I had an endoscopy after waiting several hours to drain the blood out of my stomach. It turned out I had developed a Mallory Weiss tear from the initial vomiting, which, after the blood was metabolized it converted to methane, inducing further vomiting.

I lived with my sister, and my parents came for periods. They took me on walks. I remember the first time I made it one block. The next big milestone was to walk from one end of the mall to the other. It was so wonderful to be with my whole family. My sister’s boyfriend, Jordan, and his family were so kind to me. His mom taught me needlepoint! I got calls every day from well-wishers, and it was great to be alive.

For the next six months, I did a weekly infusion of 5-FU and Leucovorin. It was a long, tiring six months, and I remained off work the entire time. On October 18th, 2000, I completed my last treatment. My sister threw a big party for me. It was a wonderful time on a sunny day with cherished memories.

Shortly after, I started on a Qi Gong and Alternative medicine program that was sponsored by John Gray (of “Men Are From Mars” fame) and Dr. Sha. We did herbs and acupuncture as well. I also kept up with my support groups, both the young person’s group as well as the colon cancer group. I met great people who were mutually supportive there.

About a year after I started life as a cancer patient, I finally started working again. It was a return to some normalcy. Since then, I’ve still had quarterly blood tests, and regular colonoscopies, and MRI’s. My doctors Alan Venook, Vicky Yang, Varma and Weissman have been the best. I have my war wounds, but I’m alive.