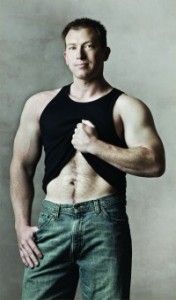 My story has definitely involved many ups and downs!  I never thought that my life would become so difficult and meaningful in one huge year!

Looking back with what knowledge I have now, the first signs of trouble should not have been ignored!  Hindsight being 20/20 I have learned to give myself a break.

I was always very healthy and athletic.  I participated in many sports growing up including baseball, basketball and soccer.  I continued with soccer into the college level.  I kept myself very fit and loved being active.  One passion that I became almost obsessed with was weightlifting.  I enjoyed the discipline and dedication it took to work hard on building and strengthening my body.  One thing that you develop in bodybuilding is the skill of listening to your body.  All of the training and eating you do means nothing if you don’t learn what works and what doesn’t.  You learn this by observing and feeling what your body is telling you.  Ironically, I was very good at knowing what my body was telling me when it came to training, but I didn’t listen so well when it began to tell me there was a serious problem developing.

The first symptoms I noticed started back in 1999.  It was an occasional spot of blood showing up after I went to the bathroom.  I was alarmed when I first saw it but quickly wrote it off to working out too hard or hemorrhoids.  This bleeding might occur once or twice every other month so I would have time to conveniently forget about it.  Besides, I was only 25 years old and healthy as a horse, so I didn’t have anything to worry about.  In 2000, my father was diagnosed with rectal cancer after having a colonoscopy.  He went through all the treatments and survived.  I was so afraid I was going to lose him.  Even then I didn’t make the connection with my little bleeding episodes and no one ever asked our family any questions regarding our health.  I am the oldest of four children and was only 26 at the time.  I didn’t even know that someone under 50 could get rectal cancer.  So, I went on with my little secret without consulting anyone.

Fast forward to 2004 and my life was going along just fine.  I began dating a girl that I knew very well named Kelly.  She and I share a very unique past.  I was the best man at her wedding back in 2000 to my best friend Eric.  Before jumping to conclusions, let me explain.  My best friend Eric and Kelly had dated throughout high school and we all graduated together.  Soon after graduation, Eric was diagnosed with a cancerous germ cell tumor.  We were all in shock!  Cancer at 18 years old was hard to understand.  Eric initially beat his cancer and then in late 1999, while engaged to Kelly, it came back in a big way, as a totally unrelated angio-sarcoma.  The doctors told him that he didn’t have long to live.  In February of 2000, in a beautiful ceremony, Eric and Kelly exchanged vows and I had the honor of being their best man.  Less than a month later Eric lost his battle with cancer, he fought so hard and was so brave.  I still miss him badly.  Many years later, Kelly and I developed from good friends into something more.  We fell in love quickly and soon found out we were going to be first time parents.  We were married on January 27, 2005.  Our families were so happy for us!

As this whirlwind of a romance was happening, something else was stirring inside of me.  My symptoms were getting noticeably worse.  I was bleeding more often and in large amounts.   I often visited the bathroom and started to have a strong ache in my rectal area.  With Kelly and I getting married and expecting a child, the stakes had been raised.  I could no longer ignore this obvious problem since it was no longer just my problem.  Therefore, I finally told Kelly and my family what had been happening.  They were worried, but thought everything would be fine, in the mean time, I was realizing that I was far from fine.  That physical self awareness from weightlifting that I talked about was screaming “Houston we have a problem!”  I knew I needed to see a doctor.  I did, and was scheduled for a colonoscopy on March 18, 2005.  I warned my family before the procedure to prepare to hear some bad news.  They thought, or hoped, I was just being silly!

The first person I saw after waking up from the scope was Kelly.  The tears in her eyes said it all.  As the grogginess wore off the doctor told me that I had a very large, ulcerated tumor that was undoubtedly rectal cancer.  My world stopped spinning for about 10 seconds when I realized that I had to be strong for my pregnant wife and family.  So, I took the news in stride and wanted to begin getting rid of this cancer ASAP!

The news only got worse after subsequent scans of my body.  The cancer had spread to my liver!  Well, that was the news I really didn’t want to hear.  So, I listened as the doctor explained that they found a mass on my liver and that meant I had stage IV rectal cancer.  I was now very afraid.  How could this be happening to me now?  Now that I was married?  Now that I was going to be a father?  All my fears had been realized.  I was also feeling guilt and pain for Kelly, who had already been widowed by cancer.  I needed to fight this disease with all my strength.  The doctor went on to say that I was actually lucky.  “How?” I asked.  He stated that my cancer had spread to the left lobe of my liver and fortunately, it could be surgically removed.  If it had been in the right lobe, which is 85% more common, then they wouldn’t have been able to surgically remove it.  Well, finally, some good news!

I had a medi-port put in the next week and began chemotherapy and radiation immediately.  The plan was to have 24 doses of radiation and 6 chemo treatments prior to surgery.  The chemo and radiation didn’t really make me very sick.  I would have to say the weakness and diarrhea were the worst parts.  The next step was the surgery which had to be scheduled around the birth of my son, Leighton, my little angel!  He was born on August 29, 2005, the day Hurricane Katrina hit New Orleans.  Seeing my son being born was the most beautiful moment of my life, Kelly and I cried tears of joy together.  Becoming a father gave me renewed strength to continue my fight!  Two weeks later, I had a 5 ½ hour surgery, resecting my rectum and removing the left lobe of my liver.  They also took out abdominal lymph nodes.  I was in the hospital for eight days.  It was very painful, but I found strength in having Kelly and Leighton by my side.

The prognosis was wonderful!  The surgery went great and my surgeon was confident in his work.  Post-surgery chemotherapy was needed, but I was in the home stretch and was ready for it!  I was to receive 12 more treatments to make sure any remaining cancer cells would be destroyed.  After treatment number eight, I became extremely ill and it was then that Kelly and I made the decision that the next one would be my last one.  My doctor agreed that there was no evidence that twelve treatments were not as effective as nine.  Since I was so sick and weak from all I had endured over the past 1 ½ years, treatment ended.

Weightlifting had played such a huge part in my life…thank God I was in such great shape before all of this, because all of the muscle mass that I had carried really helped me to survive my treatments and surgery.  When I started the ordeal, I weighed 225 pounds and at my weakest moment I had only gotten down to 170.  All those years of training weren’t wasted.

My post treatment tests came back clear and finally after more than 2 years, I am starting to feel normal again.  I couldn’t have done it without my family and friends that were always there when I needed them!  My life before my diagnosis of rectal cancer was just beginning to become meaningful.  I had just gotten married, I was to be a father and at 31 years old, I was sent on a very hard detour.  That road isn’t over yet, but it sure is a lot less bumpy!  Looking back, I wish I would have listened to what my body was telling me.  I was naive about rectal cancer and how it really can affect anyone!  The stereotypes of colorectal cancer should be tossed out the window.  It isn’t just elderly people in their 60’s and 70’s that get this disease.  I hope that anyone that I tell, or that hears my story will keep vigilant with their health and that of their friends and family.  Early detection is half the battle.  My doctors predicted that my cancer had probably been growing for 6 or 7 years before my diagnosis!  I regret that I waited, but hopefully everything is going to be just fine.  It has to be, I have an amazing son to raise!