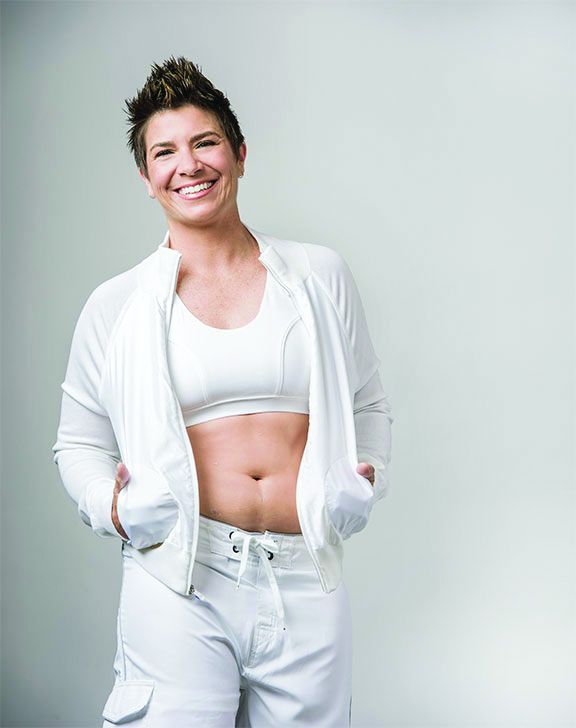 My name is Emily Mazzetti and I’m a healthy, active young adult. I never drink, smoke, or do drugs and live a pretty healthy lifestyle. Cancer was never even on my radar. I was the healthiest in my family (or so I thought!), but in February 2011, my shocking rectal cancer diagnosis confirmed the symptoms I had ignored for some time.

I was 36 years old, loving and living life. I had been experiencing symptoms for about 8-12 months, but kind of just dug my head in the sand. I had never really been to the doctor, except for a cold or something like that. The possibility of a colonoscopy was the last thing I wanted to do! So, I just kept ignoring the symptoms until one day I had passed a significant amount of blood. That startled me enough to communicate to my partner what I was experiencing. She immediately grew concerned and made an appointment to see a doctor.

We met with Dr. Daniel Ng for the first time, and I explained my symptoms to him. He did his exam (which I was NOT looking forward to), and couldn’t feel anything out of the ordinary. He scheduled me for a colonoscopy a few weeks later. That day finally came, and the doctor confirmed there was a tumor in my rectum. He didn’t say right then that it was cancerous, but based on his experience, he thought it probably was. I knew something wasn’t right “down there”, but I never really thought it could be cancer. A couple days later, the pathology report confirmed that it was rectal cancer.

My initial thought was, “Let’s get this done, have surgery, get it out, and move on!” Little did I know what I was in for-CT scans, chemo, radiation, and the worst part a fissure. I tolerated the chemoradation quite well, but after it was all over, I had developed the worst fissure. It was horrible. Once I got that under control, I was able to get strong and healthy to prepare for surgery.

The surgery for me was a breeze, really. My doctor used the DaVinci robot to do it laparoscopically, and it went very well. I was up and walking the next day, and had to take very little pain meds. The hardest part was not being able to eat for several days, as my surgeon slowly graduated me from liquids to solid food following the surgery. The good thing was that no lymph nodes or other organs were involved, so I was diagnosed as stage IIA rectal cancer.

A few weeks after surgery, I had begun the FOLFOX chemo regimen. After the first couple of rounds, I realized that this would be the hardest part of the whole process. I hated it, and the side effects were felt almost immediately-the nausea, cold sensitivity, neuropathy, first bite pain, etc. After four rounds, I was miserable and decided I wasn’t going to do it anymore. I was sicker with the chemo than I had ever been, and I didn’t want to have to live with any long-term side effects. My doctor was supportive and recommended I continue with the 5FU only. Since I had tolerated it well prior to surgery, he said it’s better than doing nothing, so, I agreed. I had finished out most of the remaining treatments before getting sick at the end and finally called it quits. I felt the chemo was killing me, and I just couldn’t tolerate it any longer. I’m glad I made that decision because I learned to listen to my body and do what I felt was right for me!

Today I’m cancer free and living the life of a cancer warrior! I’m trying not to “waste” this experience, so I’m eager to get my story out and share with others how important it is to listen to your body and don’t ignore the symptoms. It can happen to anyone, at any age! I continue to be active and have a whole new outlook on life!