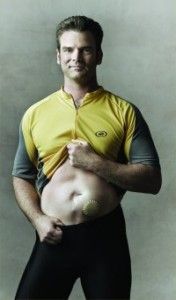 My story starts in February of 2003. I was in the garage building a small sound room for the drum set I got for Christmas. I just finished placing sheetrock on the back of the room that would be against the wall of the garage. I started pushing on the front, using my legs of course, so I was pushing with my back against the studs of the unfinished wall. Well the 2×4 stud gave way and I fell hard on my bum and caused a slight pain that I thought was my prostate or something. For the next few months the pain got worse. It became more difficult to have a bowel movement, not to mention the bleeding that started. I also started getting weaker and more tired as the months progressed until I couldn’t take it anymore.

I finally gave in and made a doctor’s appointment. It was April 28, 2003. This became the worst and one of the most painful weeks to date. The next day I saw my surgeon. After a painful exam he told me I had a lesion in my rectum and had to get a colonoscopy/biopsy, which happened the next day. The internist that did the colonoscopy stated he was 90% sure it would be cancer, but he would tell me for sure on Friday after getting the results from the biopsy. That Thursday was the most emotional day of my life. I was scared, sad and worried all day long and cried because I expected the very worst scenario. The emotions were not for the cancer. I was worried about how it would affect my career as a firefighter that started May of 2001. My mind went crazy. How can I go through treatment and still work? If I have to have a colostomy, could I still be a firefighter. I wanted to just let the cancer take me rather than give up the career that took 6 years to finally get. That Friday I put my strong face on and went to hear the bad news. I was so baffled as to how I got cancer. I kept asking, “Why me?” Well that day is when I vowed I would not lay down and let cancer take me. I won’t give up I would fight!

I met my radiation oncologist in late May and I took what he said literally. He told me to keep “normalcy.” Well, I vowed to work up until the day I was to have surgery. I was scheduled to have 25 radiation treatments at a maximum dose. I had my radiation scheduled at 8am Monday through Friday. I arranged coverage with my fellow firefighters that I worked with at the station I was assigned. When I was scheduled to work on a radiation day, it was arranged that the person I was relieving would hold over until I got there. On the days I was getting off duty, the next person would come in early so that I could make it to my appointment. At first it was hard, but then it worked out. We work 24 hour shifts in a cycle of three. For example, one week I would work Monday, Wednesday, and Friday. The next would be Wednesday, Friday, Sunday, and so on and so forth. Anyway, I wouldn’t back down. I would come into work after treatment and immediately work out to try to keep my strength up by lifting weights and doing some sort of cardiovascular work. I never would have guessed how painful things would get. It got so bad I could barely walk toward the end of my radiation treatments.

My fellow firefighters saw how much pain I was in and banned together. They made me go home and worked several shifts for me so I could recover before my surgery. I should mention how frustrated my doctor became due to my refusal to take pain medications no matter how much pain I was in. This was hard. I couldn’t take pain medications while I was on duty. I am also a paramedic and with my job duties I cannot be impaired in any way. This was hard for my doctor since I would see him and inform him that my pain level was at a 9 most of the time, sometimes spiking over 10. This is also why my fellow firefighters decided to work for me and I finally gave in and took the morphine my doctor prescribed me, but only for a few days. Then I stopped because I didn’t want to become dependent on them.

During my radiation treatments I also had an appointment with another oncologist about chemotherapy. They wanted to give me a pick line, an IV that goes directly into a major blood vessel. This was going to be in my chest. I was told I would have a 98% survival rate with radiation and surgery. I asked this doctor if my percentile would go to 100% with chemo. “No,” was his answer. I said, “Well then, I have to decline since I cannot work with this pick line in place. “Why?” he asked. “I cannot wear my air pack since the straps would go across the pick line and my fire gear would interfere with the pump. Remember that normalcy thing? If I’m not able to work, there is no normalcy!” So, “No,” was my answer to chemotherapy. I had to wait through July so that the damage done by the radiation could have a chance to heal before I went into surgery. That same month, I walked for the Relay for Life with our firefighter’s team. I walked 2 miles that day and then was too tired to join the survivor’s ceremony.

August 6, 2003 was the magical date. I was to go in and have my rectum removed and a colostomy put in. I was terrified. While growing up, my grandmother Mom’s Mom) had a colostomy and all I can remember was that Grandma stunk and so did her house. She didn’t take care of it very well, so you can imagine how I felt about a colostomy. I only knew them as smelly and gross and I was going to have one now. How would I work with this pouch attached to me? I saw my ET nurse several times before my surgery to mark where my stoma would go, so that it would not interfere with my turnouts (fire clothing). I didn’t have anyone to talk to about it. I didn’t know any firefighters that went through what I was going to go through. That’s why I am now a mentor for the Firefighters Cancer Support Network.

August 6th came and the medication for sedation came and I awoke 6 hours later in an incredible amount of pain with a pouch attached to the left side of my abdomen. You never really know how much you use your abdominal muscles until they are cut into and very painful. I was in the hospital for 7 days. Each day I weaned myself down to less and less pain medication and walked more and more. I was utterly mortified that I had a colostomy and didn’t know what I was going to do about it.

My brother gave me a book to read while I was in the hospital. It was Lance Armstrong’s book, “It’s Not About the Bike.” This motivated me to overcome what was happening to me and make the best of it. I have to say it motivated me to become a cyclist also. That would come at a later day though. I had to get back to work first. When I got home I have to admit, I didn’t stay in bed very much, and when I was in bed I had dumb bells in my hands and was trying to build up my strength. Within a week I was up vacuuming my house and going to Sears with my mother to pick out a new washer and drier. I was out for 10 weeks. I did get stir crazy, but by 8 weeks I was out in the drive way shoveling rocks for landscaping. At 10 weeks I was back on the fire engine – full duty without restrictions. The very next month I was carrying two different people out of a fire. I have to admit I rushed things and I did end up back in the hospital September 18, 2004 for an umbilical hernia repair.

The time between diagnosis and surgery was very fast, although it seems so long because of the pain. This whole experience prompted me to want to tell my story, so I got involved with the Relay for Life and the American Cancer Society. I was the Team Recruitment Chair for 2004 and recruited 84 teams for that year, at least 25 more than the previous year. I spoke in the Vacaville and Fairfield ceremonies and poke at the Cancer Survivor’s Day. I loved telling my story and I am open to talk to anyone about cancer and my colostomy. I submitted my story for the Great Comebacks program and was in the top 3 for the west coast in 2006. 2004 was also the year I started cycling. My goal was to ride in the Tour of Hope until they stopped it after the 2006 ride. I have ridden many miles and competed in a dozen bike races in 2006 till now. I still ride almost every day and race occasionally. I think I have about 10,000 miles logged to date. One of my hardest cycling accomplishments is completing all five mountain passes in the Markleeville Death Ride, riding 130 miles and climbing 15,000 vertical feet in 11 hours and ten minutes.

In 2009, I have a spot on our 8 person relay team for the Race Across America. I will be riding an awareness ride for the Firefighters Cancer Support Network, Fire Velo Cycling Club from San Francisco to Los Angeles on August 4 – 10, 2008. I think what I’m trying to say in this paragraph is that cancer and my colostomy have not slowed me down at all. As a matter of fact, I have become more active than before my cancer diagnosis.