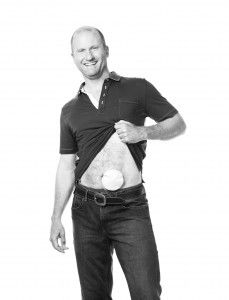 In retrospect, I wish I had paid more attention to the symptoms.

I had always been a healthy person.  I grew up in a suburb outside Milwaukee, and had a healthy and active childhood.  I played sports, goofed around on my computer, and hung out with my friends.  And, with a brother and twin sisters, things were rarely dull.

I went to college at the University of Wisconsin in Madison, where, among all the madness, I played intramural sports, was in the marching band and eventually earned a masters degree in electrical engineering.  Engineering took me to Austin, Texas where I began a career in computer chip design.  Austin was fun for a few years but I never planned on staying – it was too hot for this Wisconsin boy, and the Pacific Northwest was calling me.  So, after three years in Texas I packed my bags and moved to Seattle.

I immediately fell in love with the outdoors.  I couldn’t believe my fortune in actually being able to live there.  I jumped head first into mountain climbing and backpacking, and for the next few years, I spent most of my free time exploring the outdoors.  It was an exciting time of my life and being outdoors was when I was happiest.  I had many adventures, culminating with reaching the summit of Denali (the highest peak in North America) in 2004.

The bleeding started after I moved to Washington, probably when I was in my early thirties.  The first time I noticed streaks of blood in my stool, I was pretty alarmed.  But, as it only happened occasionally and didn’t cause any pain, I didn’t give it much thought and never brought it up with my doctor.

After five years in Seattle, in 2003, I decided to change careers and returned to Madison to attend law school. I still had a challenging chip design job, but it had gotten a bit stale.  Having become enamored with the outdoors, I decided I wanted to be an advocate for the environment and becoming an environmental attorney seemed to be a great way to do that.

After law school, I returned to the Pacific Northwest in 2007 to take a job as an intellectual property attorney with a private law firm in Portland.  (The environmental lawyer thing didn’t pan out.)  It was tough to leave my family in Wisconsin behind, but the Northwest was once again calling me.  To make up for lost outdoor time while I had my nose buried in law books, I took three months off to take an around-the-world trip to cross some things off on my adventure “to do” list.  I hiked the Alps, hiked to the top of Kilimanjaro, trekked to Everest base camp, and backpacked through New Zealand and Western Europe.  It was an amazing experience.

In the fall of 2009, with the bleeding still there, I started getting pains deep in my pelvic region.  These were pains I had never felt before and I knew they weren’t right.   I grew concerned.  At my annual physical a few months later, having turned 40, it was finally time for the doctor to start checking my prostate, so he stuck his finger up my behind for a feel. He didn’t get very far before he hit the tumor.  Less than a week later, I was diagnosed with Stage III rectal cancer.

I was shocked.  Here I was, at 40, with a cancer that people get when they’re much older.  Just as upsetting was hearing that there was a good chance I could up with a permanent colostomy.  I felt I could deal with cancer treatment – that had a start and an end.  But “the bag”?  No way.  Unacceptable.  That would be there for life.  Anything but that.

My surgeon, Dr. Mark Whiteford of the Oregon Clinic, offered a sphincter-saving surgical procedure if I had a sufficient response to chemo and radiation.  This was encouraging, and saving my sphincter became my primary focus after making sure we got rid of the cancer.   Still, I flew out to the Mayo Clinic to get a second opinion on surgical options.  Everyone there said NOT to mess with cancer and to get an APR (abdominoperineal resection), whereby my anus, rectum, and a good foot and a half of my colon would be removed, leaving me with a permanent colostomy, regardless of how I responded to radiation and chemo.

I battled through chemo and radiation, riding my bike and running when I could, with work providing a welcome distraction.  I responded well to treatment and after much research and internal debate, I chose to go with the sphincter-saving procedure, with APR being the backup plan if things didn’t work out.

Of course, after a seven-hour surgery, I woke up in the recovery room with a permanent colostomy.  The sphincter was just too close to the tumor to be saved.  Dammit.  I hated the colostomy and I hated the bag.  It was weeks before I could even look at it.

Two months after surgery I had recovered enough that they could start my post-surgery chemo.  What a grind.  The fatigue, the neuropathy, the cold sensitivity, the chemo brain – this time the chemo really wiped me out.   I worked and exercised when I could, but mostly I just counted down the days until chemo would be over.

Backpacking, cycling and giving back

When treatment was done, I eagerly started my recovery.  I wanted to come back stronger, for 2011 to be my comeback year, and to do something I had never done before being diagnosed with cancer.  I signed up for a century bike ride.  I trained in earnest, increasing my mileage as my strength and my rear end allowed.  I reached my goal in June when I did a century ride in Denver.   I was euphoric crossing the finish line.  I kept things going and did a few more century rides that summer.  This year, I focused on backpacking and went of a couple of week-long trips in Sequoia and Olympic national parks.  I don’t have the physical strength or endurance I had before cancer, maybe that’ll come back in time (or maybe I’m just getting older), but I’m elated just to be able to get outside and be physically active.  I’m happy that cancer didn’t take that away from me.

Being a cancer survivor, I’m acutely aware that the future is promised to no one, and that I have to make the time to do the things that I want to do with my life now and not to push them off for another day.  Work/life balance has always been important to me, and a constant struggle as I tend to get caught up in work, but now I find that I have a better balance.  I take more time for my friends, my family, others and myself.  I fly back to see my family and friends more often and up until I recently changed jobs, I volunteered with Portland-based Children’s Cancer Association (www.joyrx.org) as a “Chemo Pal.”  I was paired with a 10-year old kid named Derik who is going through leukemia treatment, and I visited him when he was in town for treatment.  It was great fun and very rewarding.  But it all takes time.  I find there aren’t enough hours in the day to do all things I want to do.

Adjusting to the colostomy

As far as the colostomy, things have gotten as good as they’re going to get.  Having a bag was a big blow to my self-image. Every time a part of the ostomy appliance broke and things leaked out, every time my stoma made any kind of noise, or any time there was a whiff of odor, I felt everyone in the room could see, hear or smell it, and I just wanted to crawl under the table.  Now, I irrigate daily, and that’s been a complete game changer.  I no longer worry about my stoma being active during the day, having a leaky appliance or having to change bags.  I irrigate in the morning, slap on a stoma cap, and that’s it.  I don’t think much about it the rest of the day.  Finally, I’m starting to get my swag back.

Cancer sucks.  Cancer takes.  It wreaks havoc on you – physically and mentally.  I don’t wish it upon anyone.   But, there have been some silver linings.  My outlook on life has changed.  I try to life a healthy lifestyle, to keep a healthy work/life balance, to keep life simple, and to not sweat the small stuff.  Still, it’s easier said than done, especially after returning to health and having to deal with the realities of day-to-day living.

Cancer and my birth family

My cancer has helped several others, too. I was adopted at birth and tracked down my birth family in 2001.  It turned out my birth parents got married and had three more sons.  When I was diagnosed, my chemo oncologist said they should get screened as well.  They did, and two of them had polyps.  One of them had pre-cancerous polyps.  That’s three out of four siblings age 40 and younger with polyps or rectal cancer in a family with no known history of the disease.  Go figure.  A few others were inspired to get screened after hearing my story, and polyps were caught in a few of them as well.  I started a blog shortly after getting diagnosed (http://wistrekker.blogspot.com), and a few people have let me know reading my blog has helped them in dealing with their own (or a loved one’s) rectal cancer diagnosis.

It makes me feel happy to know that at least a few others have benefited from my experience.  It feels like a small repayment for the amazing outpouring of support I received from my friends, co-workers, families, my cancer support group and those in the online cancer community who I’ll likely never meet.  I hope that I can continue to pay it forward.