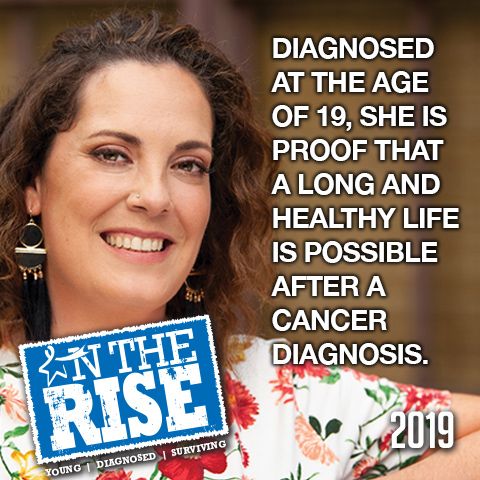 In 2001, Denelle Suranski was in her senior year of high school, and like many teenagers, she was shy, quiet, and lacked confidence. When her parents decided to divorce that year, it tore Denelle’s family apart and she didn’t know how to handle her emotional pain. She began to experience chronic fatigue, was frequently constipated, had horrible indigestion, and was passing blood. Denelle went to her primary care physician several times complaining of these symptoms, but for two years she was only diagnosed with hemorrhoids without the doctor ever doing a digital exam to confirm it. It wasn’t until her dad was diagnosed with stage I colon cancer at age 44 that the doctor finally took her complaints seriously.

When the doctor finally ordered a colonoscopy, it revealed a mass in her rectum and a biopsy led to a stage II rectal cancer diagnosis at the tender age of 19. Soon after, she and her mom met with a surgeon who wanted Denelle to have a complete colectomy and permanent colostomy, but her mother insisted the doctor find another way. They chose colectomy and a temporary ileostomy. After one month of chemo and radiation, she had surgery to create a colonic J pouch, had additional chemo, and then had surgery to reverse the ileostomy.

Because Denelle and her dad were both diagnosed before age 50, her doctors had her go through genetic testing, which confirmed she had Lynch Syndrome. According to the Mayo Clinic, people with Lynch Syndrome tend to develop colon polyps that are more difficult to detect. Denelle is vigilant with her yearly colonoscopies for this very reason. In addition to colorectal cancer, people with Lynch Syndrome have an increased risk of cancers of the stomach, small intestine, liver, gallbladder ducts, upper urinary tract, brain, and skin. Women with Lynch Syndrome also have a higher risk of cancer of the ovaries and endometrium. Denelle’s doctor suggested she have a hysterectomy to prevent future cancers, but due to the fact that she was only 19, Denelle chose to put off this measure for a while.

To say she did not handle her cancer diagnosis well was an understatement, and adding the Lynch Syndrome diagnosis caused her additional stress. Being so young, Denelle quite literally couldn’t mentally process her diagnosis. Even though people with stage IIA colorectal cancer have a five-year relative survival rate of about 87 percent, Denelle thought she was going to die. She was paralyzed with fear, riddled with anxiety, and severely depressed. Denelle also didn’t take her diagnosis seriously enough to realize she was causing more harm to her body when she began drinking while on chemo, which led to a lowered immune system. She even briefly contemplated suicide. Trying to alleviate the fear and anxiety, she sought help from a therapist.

Dozens of studies have proven the human brain isn’t fully developed until age 25, specifically the area known as the prefrontal cortex. This is the part of the brain that is responsible for decision making. Regarding teenagers, Dr. Jay Giedd at the National Institute of Mental Health in Bethesda says, “It’s sort of unfair to expect them to have adult levels of decision making before their brain is finished being built.”

Today, Denelle continues to fight her battle with depression and anxiety, but she is now able to recognize her triggers, like survivor’s guilt, and finds a lot of support being active in different colorectal cancer communities.

According to the American Cancer Society, radiation to the pelvic area often causes loss of fertility and early menopause, as it did with Denelle. During her first surgery, Denelle’s ovaries were moved in an attempt to keep them out of the radiation field and preserve her fertility, but this proved to be unsuccessful. She had a hard time accepting that she would never have children and needed a hysterectomy, but twelve years after her initial diagnosis, and with the support of her husband, she moved forward.

“I realized that I was already post-menopausal, so why delay it any further and risk getting cancer yet again.” Despite scar tissue that had to be removed to detach her uterus from other organs, Denelle came through the surgery without a colostomy and had a new lease on life.

Denelle is a kindhearted, sweet soul who feels nature nurtures her soul. She enjoys getting out into nature as a way to find peace and focus on the beauty that surrounds us. One of her favorite things to do is to find Monarch butterfly eggs and ensure their survival. Nurturing something else into life has helped her with managing the grief she feels from not being able to bare her own children. Gently caring for something has helped her learn how to care for herself.

Watching the life cycle of the butterflies is a reminder of what she has gone through with her cancer journey. “In a way, I went through a similar cycle. I had to grow and change to get to be the person I am now. The knowledge and wisdom I have gained since my diagnosis has allowed me to emerge as a beautiful butterfly.”

As a fifteen-year survivor, Denelle is proof that a long, healthy life is possible after a cancer diagnosis. She wants to encourage everyone who has been diagnosed with cancer at a young age to seek the help of a therapist or counselor. Therapy, time, and a change in mindset have all allowed Denelle to no longer be the shy, insecure, depressed teenager she was when she was first told about her cancer. We have no doubt that she has a bright future ahead of her!