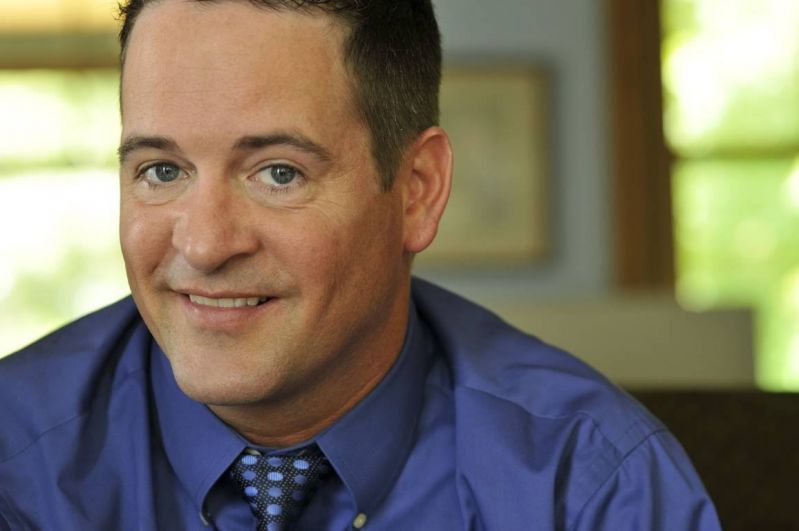 I was at a trade show in Las Vegas in October of 2006, when I noticed some blood in my stool.  It was dark red and just kind of streaked on my poop.  Not a lot of blood, but it concerned me.  I called my brother Greg, because he worked for Olympus selling scopes for colonoscopies.  He asked me a few questions about the color and consistency and told me to go see my doctor when I got home if it persisted over a couple of weeks.

So, I started paying attention, and I realized that I was experiencing some irregularity (constipation and diarrhea essentially), but didn’t think much of it.  I am in medical sales, so I traveled a lot, didn’t eat right, didn’t exercise, drank a little, and was a smoker.  So, what do I do?  Mix in a little Raisin Bran, try to stop smoking, and go make that next sale.  I had to keep moving.  I had a family to help support.

I kept paying attention but was really too busy to do anything about my ongoing symptoms.  I had that same blood, my stools were narrow (I compare it to pushing Play Dough out of a Play Dough maker), felt gross, lethargic and tired, bloated, and didn’t feel like I was emptying when I pooped. But again, I was so busy working, that I couldn’t find time to go see my doctor.

I finally reached my breaking point when I spent New Year’s Eve with my brother in Chicago.  I was so tired and didn’t feel like doing anything.  When my brother asked what was wrong, I told him.  He was upset that I had waited as long as I had, so we tried a laxative to help with the bloated feeling, but that didn’t help.  When I got home from Chicago, I scheduled an appointment to see Dr. Schoon, my family doctor, right away.

After meeting with Dr. Schoon, we were both pretty confident there was nothing to be concerned about.  “You’re pretty young,” he said.  “Probably just a hemorrhoid, but why don’t we schedule a colonoscopy just to be sure?”  I reluctantly agreed and we scheduled it for February 15th, 2007.  I didn’t realize it then, but Dr. Schoon saved my life that day.

Ironically, I almost cancelled my colonoscopy appointment because again, I was too busy with work.  But, I changed my mind and followed through with it, just to give myself piece of mind.  It’s strange now when I think back to it, because when you go through a test like this, you would think that the worst things would cross your mind – the proverbial “what If” questions.  But it never crossed my mind that it could be serious.  We were all convinced I had a hemorrhoid problem.  Those who know me well would suggest I’ve always been a P.I.A.

February 15th, 2007, is the day that changed my life forever.  That is the day of my colonoscopy and cancer diagnosis, and my world was turned upside down.  It was a whirlwind day, quite a blur actually.  I remember waking up from my colonoscopy with my wife, her dad and mom and sister looking at me with the most concerned, red, puffy eyes.  Not a good sign that all is well.

My beautiful wife, Winonah, broke the news to me that I had cancer.  I’m so glad that I heard it from her.  I know she was shaken to the core, but she was so strong and reassuring.  Quite honestly, she is the strongest person I know.  I can’t even begin to tell you how much she has meant to me through this very difficult time.  She has been my foundation, and is my strength.  There is no way – I mean NO WAY – I could’ve made it without her.  She is the light of my life, and I will honor and love her all the days of my life.

Winonah and her dad took me to see Dr. Beckwith that same day.  Dr. Beckwith specializes in colorectal surgery.  Again, a whirlwind and a blur, and the next thing we know I’m scheduled for surgery the next day.  Our thought was, “Let’s get this thing out of me, NOW!!!”  Certainly a quick decision, but in retrospect I’m glad we just pulled the trigger.  No better time than the present to take a step forward.

My brother, Greg, arrived early the morning of my surgery.  He drove straight through the night from Chicago to be by my side.  There is nothing I can say that could possibly relay how important Greg is in my life.  He is a rock, and I would be lost without him.  The love and support of his wife, Chris, and our entire family was overwhelming.  We have been blessed with wonderful family and friends.

The surgery went well, but it was on a Friday so we had to wait until Monday for the pathology report.  With my wife and brother’s help I took my first steps down the hospital halls that night.  Those were my first steps toward my second chance at life.  My mind raced all weekend.  The worst outcomes finally crossed my mind and I was scared to the core.  On Monday, Dr. Beckwith brought us the pathology report, which was just about the best news we could get.  I was diagnosed with stage II rectal cancer.  They had tested 23 lymph nodes and all were negative.  The cancer had not spread.

However, the tumor had penetrated the colon wall, which didn’t mean much to us at the time.  The significance of this came to light when we met with Dr. Behrens, my oncologist.  He came to see us at about 8 o’clock at night, which I have to say impressed us a great deal.  He told us that he would recommend the Folfox regimen and radiation due to the tumor penetrating the colon wall.  He also told us that he would recommend that we get a second opinion, which we appreciated a great deal.  He advised us that if we were going to do any online research to stick to the National Cancer Institute or the American Cancer Society because there is a lot of misinformation and to be careful what we read.  His honesty and straightforward approach was appreciated, and after some research we decided to go forward with his recommendation.

After I recovered from the surgery, I had an infuse-port implanted and had my first course of the Folfox regimen.  This hit me like a ton of bricks.  I was so sick that it is truly indescribable.  I lost 13 pounds in about 72 hours due to dehydration, but started to recover after 2000cc of intravenous fluids.  The fluids would become a regular occurrence with my infusion treatments.  We decided to adjust my dosage for the subsequent treatments, thankfully.

We decided to start my radiation treatments after my first infusion treatment because of a family vacation we had planned to Disney World in Orlando.  Ironically, we had purchased the tickets the Sunday before my diagnosis, and after all I’d been through, we all decided that this was necessary for my sanity.  It was so great to see my son’s face light up when we were at the Magic Kingdom.  His smile and laughter was always the best medicine.  Even though he was only 4 at the time, he knew something was wrong with Daddy.  I have to say that he brought a sense of normalcy to a crazy time.  He is the apple of my eye.

The radiation treatments themselves went pretty well.  However, during treatments I developed a peritoneal hernia that worsened throughout this course of treatment.  It was excruciating, lying on my stomach (directly on the hernia) day after day.  I started taking pain medication throughout the day, every day, just to get through the days.  But it was over before we knew it and I had no physical effects from the treatment, except for the complications from the hernia.  I had the hernia repaired laparoscopically on June 7th of 2007 after our trip to Disney, which was the best medicine I could’ve had throughout my treatments.

It was a very difficult recovery after this surgery.  I was actually in the hospital for the hernia repair for twice as long as I was for the colon resection.  By then, my weight had dropped from my peak of 195 pounds 145 pounds, all in under just a few months.  I received help getting back to my healthy state from a very close friend of my wife’s.  Denise Albert is a Registered Dietician with the University of Iowa and I am convinced she helped save my life.  I was borderline anorexic, but with her help I finally started to gain my weight back and get healthy enough for my remaining Folfox treatments – 7 to go!

Now it gets weird.  During my third treatment I had a very strange reaction.  We actually thought I was having a heart attack.  We spent the night in the ER undergoing a whole battery of tests, but did not find a thing wrong.  Before I could start my next treatment I had to undergo a stress test, which came back normal.  I didn’t realize it at the time, but there is a percentage of the population that can react to the 5-FU in a very negative way.  Heart failure can actually happen.  Scary!  Well, my oncologist told me that when a patient who is on 5-FU complains of chest pains, they take it very, very seriously.  I believe he told me, “You tell an oncologist that you’re having chest pain and you get our attention.”

We decided to change my regimen from the Folfox, to the Flox regiment.  Flox is the “European” form of Folfox.  Everything is the same except they infuse the 5-FU all at once instead of infusing it slowly over a couple of days.  No more fanny pack, which was actually a blessing.  More importantly though, if I reacted to the 5-FU again, they would be able to treat me immediately.

The treatments wore me down, but were finally finished on October 4th, 2007, which was a couple of months later than we had originally planned.  But I got through it.  The following months landed me back in the hospital a couple of times with a bowel obstruction, but slowly and surely I recovered.  In fact, in June of 2008 I completed my first triathlon, which had always been a goal of mine.

I am now happier and healthier than I have ever been.  Officially there is no evidence of the disease and I am looking forward to tackling all the challenges that lie ahead.  I know that I was diagnosed with this for a reason, and I believe it is to help others through this journey and to raise awareness that this isn’t a just a disease that inflicts those over the age 50.  My wife and I along with a friend (who lost her husband to rectal cancer at the age of 37), have started a non-profit foundation called David’s Fight to spread the word and to help those in need.

Cancer picked the wrong guy to mess with!