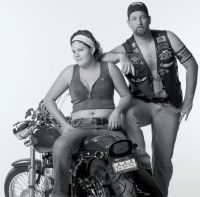 Darrick Price knows that sometimes you just have to have faith. Little did he realize just how important it is.

When Darrick saw that he was having rectal bleeding, he tried to hide it, but his mother quickly discovered his secret. She took him to a doctor immediately, and eight days after his sixteenth birthday, Darrick was diagnosed with stage IV rectal cancer that had metastasized to his liver. His parents were told that he wouldn’t live three months, but to everyone’s disbelief, surgery proved doctors wrong. Darrick’s metastases seemed to have disappeared virtually overnight.

Darrick credits his faith in God for seeing him through his diagnosis and into his healing. Now he believes in miracles too.

DARRICK’S STORY AS TOLD BY DARRICK:

I was 15 in January of 1987. I had just gotten a job at an amusement park and, a month later I got the chicken pox. Shortly after that, I started noticing that I was bleeding, profusely to say the least, and from the wrong place if you know what I mean. That kept happening over the summer and I was becoming white as a ghost and sleeping a lot more, taking naps at any time that I could. I didn’t know it, but the tumor was located right at my rectum, and there were a couple of times when I was on the toilet when I would try to pull stuff out. It hurt like hell and wasn’t working, but I could actually see some of it.

In September, about two weeks after school started, my mom went looking for my Bible in my dresser drawers. She was looking for a verse in the Bible because Pope John Paul II was in Los Angeles where we lived, and that’s when she found my bloodstained underwear. She immediately took me to the doctor to see what was going on, and the doctor said I needed to go into the hospital. That was Friday, September 18 and it was just seven days after my 16th birthday. I had tests done that night and after the first run of tests, they did more tests on Saturday.

They scheduled my original surgery for the next Sunday, but then the tests came back. It was stage IV rectal cancer, right at the rectum, and it had destroyed the rectal muscle. They told my parents that even with radiation and chemo, I wouldn’t be around for Christmas of that year, and they pushed back the surgery to Monday the 21st to do more tests and biopsies on Sunday. I got poked and prodded with everything you can think of. The doctors went in and couldn’t do a colonoscopy, but they did x-rays and a biopsy. They did some bloodwork and my white blood cells were all to hell. They were counting cancer cells that were all over the place. The x-rays showed numerous cells all over, and because of how the liver was shaped they thought it was in my liver too. They couldn’t believe it; they thought the x-ray machine was broken, so they called in an x-ray tech to clean and check the machine, to make sure they could see clearly. They redid everything again, but it was the same, exactly the same. Every test that they ran showed that I was stage IV, fried chicken.

Meanwhile they were pumping me full of blood to get my blood counts up because I didn’t have enough blood to go through surgery. It was so bad that they were putting the blood in as fast as it was coming out. The plan for surgery was that they were going to go in to basically help me out and try to make the last few months of my life more comfortable. My mom and dad were already getting ready to contact the Make-A-Wish Foundation for my last request.

While that was going on, I went into surgery and overnight it had gone from really bad to good. My tumor was there, but everything that had spread just disappeared basically overnight, from the 20th to the 21st. When they sliced me open, the only thing that was weird was that my liver was misshapen. During surgery, they removed my tumor and approximately 36” of my lower intestine, right from the rectum up, and gave me a colostomy. They inserted the colostomy on the left-hand side, just below my waistline.

Nobody could believe it. After surgery they redid everything, all the tests. They did all the x-rays and scans on the same machines as before, and they were all clean. It was the work of the Lord; I had a lot of people praying for me. I had every base covered. My mom’s family in Holland has nuns and I have Baptist and Catholic family and friends. I was really getting prayed for.

All this time, I was in the dark. I was just told that I was having surgery. Being 16, I really wasn’t aware of anything until after the surgery, when I finally looked at the colostomy and said, “What the hell is this thing?!” You get a connection with your doctor after that; he’s the only one you can go to and ask questions and get answers. He explained things to me not like a doctor, but in regular words. I didn’t understand the medical words. I think a lot of doctors don’t believe in divine intervention, but mine does. He is still practicing in California, and I still talk to him every once in awhile.

One of my biggest dreams as a kid was to own a Harley, and I own one now. I use it for so many positive things that I do. Since I had cancer, I’ve met quite a few children who have cancer, just to meet them and try to uplift their spirits a little bit. I let kids sit and get their picture taken on my bike because it helps them forget about what they have to do. Being 16 years old when I was diagnosed, I know that there are enough things you are going through. The last thing you need to worry about is a life-threatening disease, having to deal with colon cancer and a colostomy. I’m also involved with the Patriot Guard Riders, a nonprofit organization that rides at funerals for fallen soldiers at the request of their families. There are all kinds of community things, even nationwide, that I’m doing. I try to get involved in as many community activities as I can to raise awareness about cancer. I try to get involved in the bigger picture; that’s where the awareness gets raised. When donations need to be made, I donate myself and try to get others to donate as well.

I think that ever since I had cancer, I’ve had my own little spurts through life itself. Cancer is what actually put me towards the wrong path at first, and it was three years later that I finally woke up. I woke up and said, “What the hell am I doing? I know this is the wrong thing, but I’m doing it.” I was being a rebel without a clue, but I said, “I need some help here; guide me.” I wouldn’t say that I was in a satanic cult, but I was walking down that road. I got down on my knees and asked for His guidance. I got my answer just three days later while I was at work. It was a busy Friday at the pizza place that I worked and across the room there she was – this little redhead. The next day I walked into work and she was working there as well. I had worked there three months and didn’t know her and she didn’t know me. I met my ex-fiancée and she ended up getting me back to church. It’s all in God’s timing. Being that I grew up in a predominantly Catholic household and knowing that God doesn’t do anything you can’t handle, at first I was saying “God, why did you do this to me?” I finally got the answer eight years later when He said that Satin was trying to get me back. When I got back on my feet, I started exploring more about myself, and what this has done to me.

I’m still a Christian, but there are so many versions out there. I just roll with my own thing and go on the path that God shows me to go on. know the difference between right and wrong. I know Christianity is what saved my life; otherwise I wouldn’t be here today.