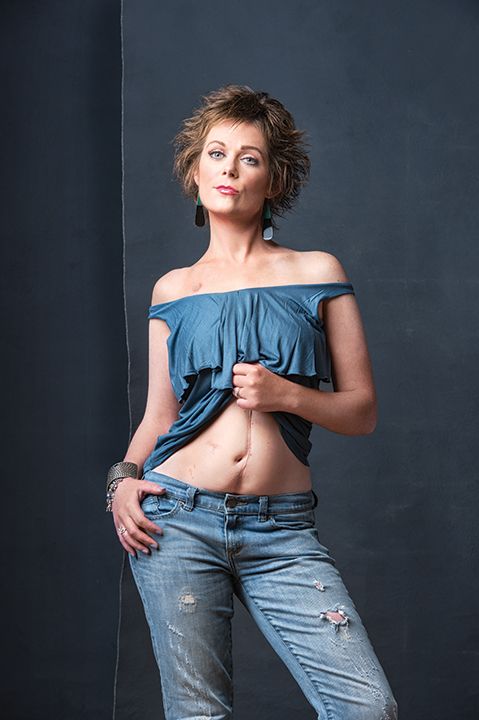 “Completely shocked.” That’s how Christy Schmieler remembers her reaction when her doctor told her she had a golf ball-sized tumor in her rectum.

Christy had noticed some rectal bleeding, but dismissed it as stress or hemorrhoids. Just five months earlier she’d seen her doctor for a routine physical and was declared healthy.

Christy’s mother joined her in the recovery room after her colonoscopy. The doctor looked up at them with tears in his eyes. “This isn’t good,” he said as her mother began to cry. “It’s probably cancer.”
Wanting to preserve fertility before beginning treatment for stage III rectal cancer, Christy had her ovaries surgically moved behind her kidneys to protect them from the radiation. Christy sought a board-certified colorectal surgeon to perform a lower anterior resection (LAR) that removed the rectal tumor and gave her a temporary ileostomy. The surgeon also moved her ovaries back into place, but the blood supply had been cut off to one of them, so she was now down to one.

While still on chemotherapy, Christy met Greg. On their second date they played mini-golf while Christy was hooked up to her chemotherapy pump. Cancer didn’t scare off Greg. Before long, they were engaged. A month before their marriage, Christy had her annual CT scan, which revealed a suspicious spot on her liver. Christy and Greg followed through with their wedding and never once thought about cancer on their special day. Upon returning from their honeymoon in Disney World, Christy started chemotherapy to treat the recurrence in her liver. The treatment made Christy extremely ill and the rectal bleeding returned. Her husband took her to the ER, where a CT scan revealed the liver tumor had shrunk but a spot in her pelvis had doubled in size since the previous scan, two months earlier. The doctors weren’t concerned about the spot, but Christy intuitively knew something was wrong and demanded her surgery date be moved up.

It took four surgeons 10 hours to resect her liver, and her bladder and also perform a hysterectomy, which her doctor said was a game-time decision, not something he could scrub in and out for to consult her family. Even though her ovaries didn’t look cancerous, they didn’t look healthy and the surgeon elected to remove them. The spot in her pelvis was scar tissue that had snowballed and was beginning to infringe on her bladder. Had she postponed the surgery, there was a good chance she would have lost a kidney. When she awoke and learned of the hysterectomy, Christy was devastated.

A little over a year later, a spot showed up on a lymph node outside Christy’s lung — another recurrence. Her current radiologist said this spot had shown up on three prior scans, but had gone unnoticed by the radiologist who initially read her report and her oncologist. They had failed to see the growing lymph node while the disease had spread to both her lungs. Christy was furious and fired her doctors, radiologist and oncologist. Her next step was to pursue treatment at a major cancer center.

With her latest recurrence, surgery and radiation are not options because there are too many spots spread between both lungs. Although she has been told she will be on some form of chemotherapy for the rest of her life, Christy is eager to prove the doctors wrong. Her  oncologist is open to alternative treatments, and the two work together to plan her current and future treatment options. Currently, Christy is looking into clinical trials with her oncologist and Johns Hopkins, and began taking Stivarga.

Despite endless setbacks, complications and challenges, Christy says cancer has changed her life for the better. She wants others to know they have to be their own advocate. “Never hesitate to seek out second and third opinions. You have multiple options for health care; you only have one chance at life.”

Christy believes that misery does not love company and urges others to stay positive. She confesses she has her moments when she will cry and break down, but then she picks herself up and moves on. “You just don’t know how strong you are until you go through something like this.”

Christy has received tremendous support from her family and friends. She is a relentless fighter, now stage IV, and refuses to be defeated. Christy wanted to be a mother, but is unable to have children or to adopt, so she treasures the many children who are a part of her life and embraces her role in theirs. Christy is determined to live her life to the fullest and always appreciate the little things.

UPDATE: We are sad to share that Christy passed away in February of 2015.