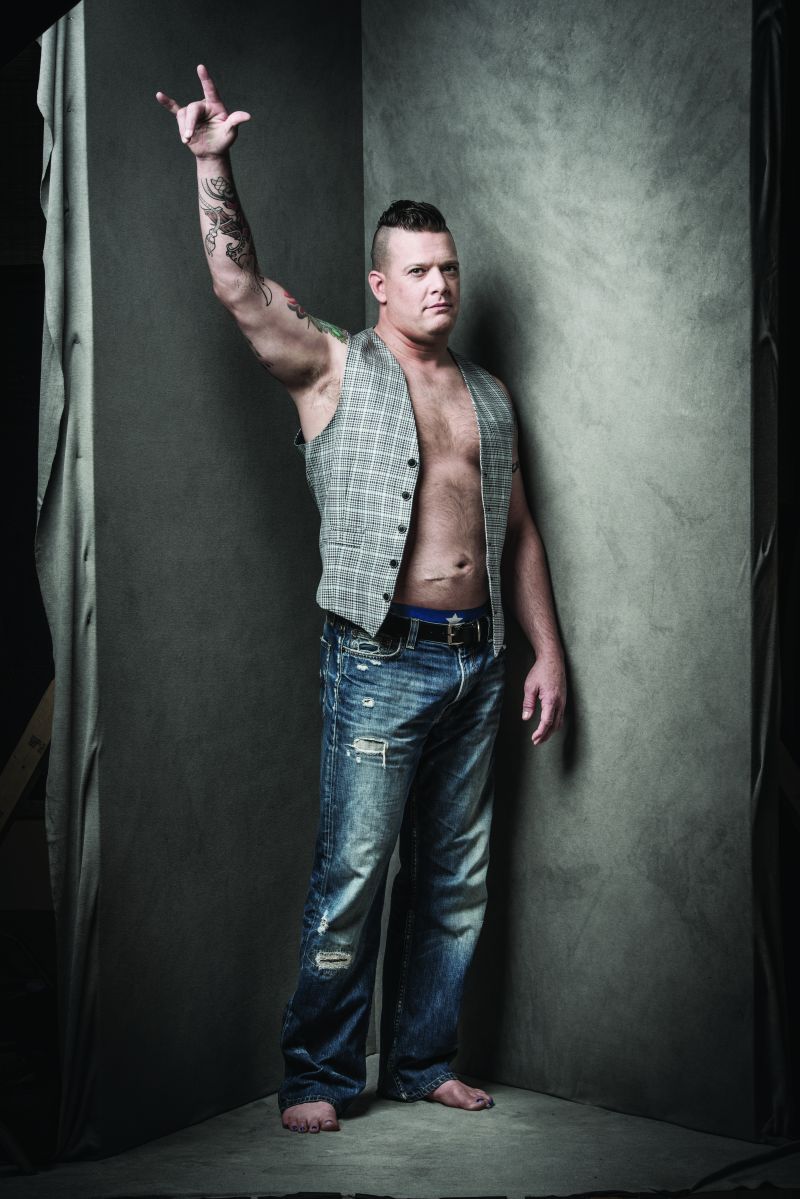 There’s a lot more to Chad Latta than meets the eye. With scars the length of his abdomen, a Mohawk, and tattoos covering much of his body, no one would guess this former Marine is a therapist and university psychology teacher. He’s also a cancer survivor—but that’s far from the biggest event of his life.

“Cancer really hasn’t changed my life mentally,” he says. “If I was to write my autobiography, it would only be a chapter.”

ARTS, SPORTS, AND A WICKED SENSE OF HUMOR

Chad grew up in Denver, the son of an oral surgeon and an opera singer. His childhood was full of music, specifically classical, as he accompanied his mom to rehearsals and performances. He enjoys singing a cappella, and also grew up to be a talented painter and artist.

Throughout his life, he’s developed his wicked sense of humor as the biggest weapon in his arsenal of defense. Small in stature, he was bullied as a child. “I kept people busy laughing so they’d have less time to pick on me,” he says.

Sports have always played a big role in Chad’s life, too, teaching him more lessons about how to cope. Between football, rugby, cycling, and Brazilian jiu-jitsu, he learned that he’d need to rely on his brain and heart to be competitive. In particular, racing bicycles taught Chad how to suffer—and survive.

“Nothing I’ve ever done hurts like bike racing. When you are at your absolute limit, gasping for air, legs in a mass of pain, you learn to shrink your focus to just making it to the next corner. And then the next,” he says. “Suffering is survivable when you break it into bite-sized chunks.”

Chad served five years in the Marines after high school, including commanding an armored personnel carrier in Operation Desert Storm. The Marines taught him a lot about himself and helped him grow up. But upon his return from service in Kuwait, he was diagnosed with Gulf War Syndrome. His immune system had been severely compromised.

According to the Department of Veteran’s Affairs 15 percent of those diagnosed with Gulf War Syndrome experienced gastrointestinal problems. There’s some speculation that Chad’s colon cancer

is a result of Gulf War Syndrome.

Early on his biggest complaint was chronic fatigue, but in 2013, Chad started having problems with his digestive system. Bloating, cramps, and occasional spotting of blood seemed to be increasing in frequency and amount. After eight months of denial, he called his doctor. A rectal exam revealed a tumor very low in his rectum.

The next step was a colonoscopy. When Chad woke up, his sense of humor kicked in. “Let me guess—I have ass cancer,” he said.

Chad got the biopsy results, Stage III rectal cancer, on his 45th birthday while his wife, Wendy, was out of the country. Making the phone call to tell her was extremely difficult, and the next six months were a whirlwind of tests, procedures, and therapies. Chemo and radiation first. Then surgery, including a temporary ileostomy. Then more chemo.

The death of his dignity was tougher than the treatment. “The more embarrassing the medical procedure, the more attractive the medical professional,” Chad observes.

But he never worried about actually dying, though he didn’t want to die anytime in the near future. He made his DNR wishes very clear to his surgeon. He decided there were certain things he couldn’t live with such as a permanent ostomy or loss of sexual function. Fortunately, neither of these things happened.

“I confronted my own mortality as a Marine and came to terms with death, something that would give me a sense of calm when later I would get cancer,” he explains. “Death is a part of the human experience.”

Today, Chad is happy to be cancer-free. He lives in Minnesota, where he loves teaching at Metropolitan State University and working at his own private practice. As a counselor, he gets to help people who share their lives with him. He’s proud of the fact he hasn’t missed a day of work all throughout his treatment, except for right after surgery.

Chad accepts that most days he’s in pain, or at least uncomfortable. He feels well enough to train in jiu-jitsu three to four times a week, but his digestive systems still causes frequent problems. Food and wine used to be joys in his life; now they’re a minefield that trigger pain and suffering. But “suffering is survivable in little chunks,” he says.

While he often finds himself frustrated, he refuses to see himself as “disabled.” Chad chooses to live life one day at a time, as the story of his life continues after cancer.