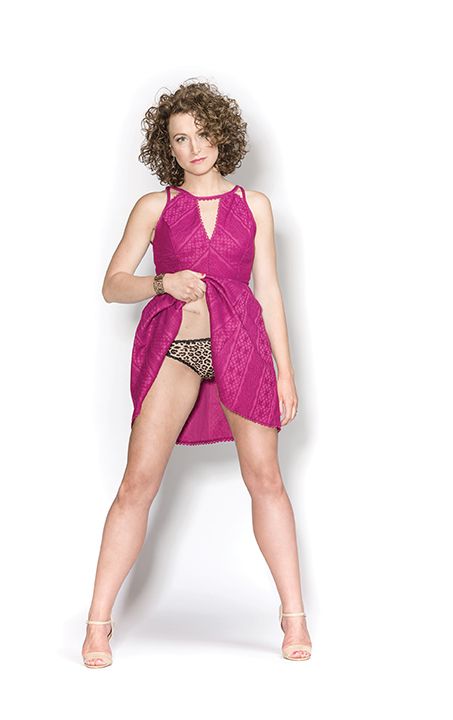 Ashley Reed is a “corn-fed, Midwestern girl” who is as spunky as her hair is curly. Her beauty is only surpassed by her wit and charm. She exudes confidence and fearlessness and isn’t afraid to speak her mind. Her Bachelor’s Degree in Business from Miami University well-prepared her for the job she loves as an Organizational Development Consultant. In 2010, she married her hero Eric, who served four years in the Air Force and six years in the Army. Ashley became mom to stepson Justin and son Eliot soon joined the family in 2011.

Like many young adults with colorectal cancer, Ashley was misdiagnosed for years. In 2011, 27-year-old Ashley was pregnant when she noticed some rectal bleeding. She mentioned it to her obstetrician (OB) who dismissed it as “just hemorrhoids” without examining her.

After she complained to her OB for close to two years, he finally examined her and concluded that her symptoms were not hemorrhoids and suggested they may be food allergies, to which Ashley replied, “OK, then I’m allergic to everything.” A friend of Ashley’s who had Celiac Disease (an autoimmune disease of the small intestine) suggested she see a gastroenterologist (GI). She had to wait six weeks for an appointment.

The GI took the rectal bleeding very seriously and ordered a colonoscopy. When Ashley awoke she knew the test hadn’t lasted as long as expected. Ashley says, “I was fuzzy when I woke up from my colonoscopy for him to deliver this news. I remember looking at the clock and recognizing that I wasn’t back in the room long enough for an entire scope to be completed.” The GI told her he’d found a tumor inside her lower bowel. It took five days for biopsy results to confirm the tumor was cancer. Two days before her son’s 2nd birthday, she was at work when her doctor called with the news, “It’s colorectal cancer.”

After a CT scan and MRI, her doctor changed the diagnosis from colon cancer to rectal cancer. A treatment plan of surgery, then concurrent chemotherapy and radiation was scheduled. A baseball sized tumor and 23 lymph nodes were removed, 12 of the lymph nodes were positive, resulting in a stage IIIC rectal cancer diagnosis. Ashley also received a temporary ileostomy, which she wasn’t thrilled about but decided she could handle anything temporarily. Twelve rounds of FOLFOX chemotherapy started. After four rounds, the chemotherapy cocktail was suspended with the exception of one drug (5-FU) while Ashley endured 28 rounds of radiation.

Ashley tolerated chemotherapy relatively well with only one allergic reaction, one ambulance ride and a handful of hospital admissions. She took extra measures to avoid being obvious about going through treatment. She didn’t always receive a positive response when people noticed her pump, port, pale skin and thinning hair. In her opinion, “Cancer is a tricky disease. People still associate it strongly with death regardless of the prognosis. Sometimes people think they need to react to you differently post-diagnosis than they would pre-diagnosis, which isn’t the case.”

Fearless, Ashley had moments during treatment when everything seemed like “a little much.” Although she didn’t miss a lot of work throughout her treatment, she wished she “could get back to the normal life of being a mom, wife and reliable employee.” During those tough times, Ashley was overwhelmed with support from “Ashley’s Army” made up of family, friends and co-workers. They held a silent auction and golf scramble. They all wore T-shirts with the phrase, “I wear blue for the toughest girl I know.” The benefit was so successful she was able to pay off several medical bills. Ashley and Eric also received help from Meredith’s Miracles, a foundation that provides miracles in the form of financial support to colon and rectal cancer patients under the age of 40.

Ashley says, “The worst thing about a cancer diagnosis is the impact it has on the life goals and plans that you set out for yourself and your family. You worry about the impact it will have on your job and the things your kids are going to miss because you’re ‘sick.’”

Her oncologist carefully danced around the topic of fertility because he wasn’t sure what sort of dreams he would be shattering by telling her she wouldn’t be able to have any more children. Like many women with rectal cancer, her fertility has been compromised. Radiation damage to her uterus has made her unable to carry a baby, but Ashley had surgery before treatment to pin one ovary out of the radiation field and the other ovary was miraculously saved. She is very happy with her family of four, but knows with a surrogate that another baby is possible in the future. She feels sacrificing her uterus was “a small price to pay” to make sure she’s around to raise the baby she already had.

Ashley completed treatment at the end of 2013 and remains cancer-free. She isn’t afraid of a re-occurrence and is so confident in her doctors and treatment regimen, she doesn’t have “scanxiety” (anxiety over scans) or keep track of her “cancerversary” (anniversary of her cancer diagnosis). The only date she celebrates is the day she finished chemotherapy. She couldn’t be happier this phase is over.