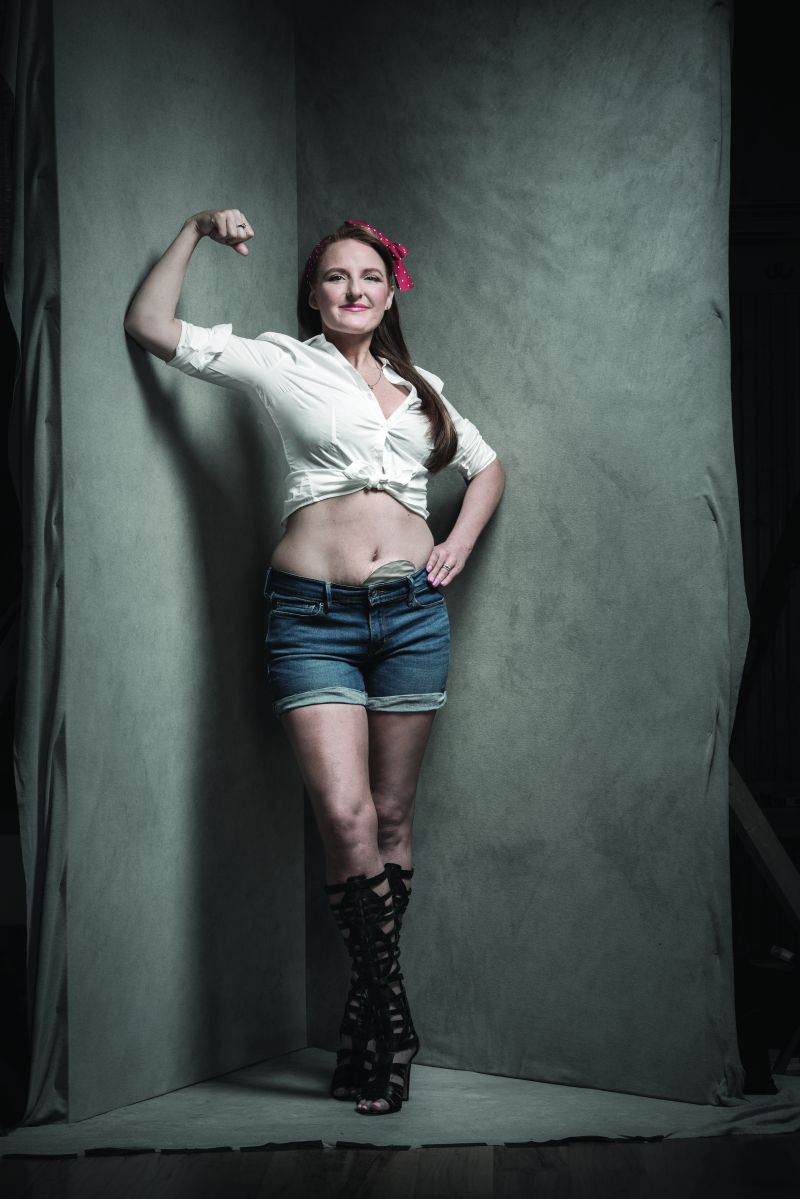 “Hope for the best, expect the worst, take what you get ...”

These words have been a part of Abbey Schnell’s life for years. It’s advice her Grandpa often gave when she was growing up – words to live by no matter what your situation. When her Grandpa died of colorectal cancer (CRC) while she was in high school, Abbey honored his spirit by tattooing his words on her foot as a constant reminder of his life advice. Little did she know how important her Grandpa’s words would be years later, perfectly placed to guide her when she needed them most.

Abbey was always a planner. She planned to: marry her high school boyfriend at 21 years old, have their first child at 23, have their second at 25. In October 2012, her second son arrived one month earlier than planned, a first warning shot that maybe her family’s life would not be as well planned out as she had hoped. One week after his birth, Abbey began to experience uncontrolled rectal bleeding.

After an emergency colonoscopy, Abbey was diagnosed with CRC. She was only 25 years old and her second son was less than two weeks old. Her dream of living a carefully planned out life were shattered.

With her grandpa’s words in her mind (and on her tattoo), Abbey reacted to her cancer diagnosis with tremendous acceptance and positivity. “Hope for the best, expect the worst, take what you get ...”

In January 2013, Abbey had her primary tumor resection surgery and had a permanent colostomy. Prior to surgery, the thought of a permanent colostomy hit her hard. She was worried by pictures she found consulting Dr. Google. Words of advice from a friend and thinking back to her Grandpa’s advice gave her the resolve to accept it.

After her surgery, Abbey looked down at her colostomy. “That’s it? It’s tiny, like the size of a nickel!” she said.

Through her husband’s research, Abbey soon learned the trick of irrigation, which allowed her to spend much of the day without a bag attached. She is very thankful that this has allowed the colostomy to make a much smaller impact on her lifestyle than she ever would have imagined – a message she actively gets out to as many young CRC survivors as possible.

Settling into her new, surprisingly smooth role as a cancer survivor, Abbey’s best-laid plans were hit by two new surprises. In June 2013, her father was diagnosed with advanced lung cancer. Due to a surgical complication, he required—of all things—a colostomy bag. Abbey and her husband, well-trained with hers, stepped in to help him as caregivers, making his remaining life more comfortable before he shortly thereafter passed away.

Almost immediately after her father passed away, Abbey received her second surprise: Her cancer had spread to her lungs. She was now classified as Stage IV. A lung spot had been there from the beginning, but had been ignored by her medical team. She was young and didn’t smoke. They didn’t believe such a tiny spot could be cancer – until it grew. Surgery was now not possible due to the extent of her disease.

Since then, Abbey has gone through a series of therapies, but it has been difficult to maintain control of her disease. She has remained positive however, working full-time both inside and outside the home while undergoing treatments.

In the past, Abbey says she focused on stressing about money, putting off family fun. She now realizes there are limits to how much you can plan life through worrying. Thinking back to the Tim McGraw song “Live Like You Were Dying”, Abbey says, “If you could change your life and really live your life like you are dying – you can be such a happier person. I’m much more positive and optimistic about everything now.”

A lifelong softball player, one of Abbey’s first thoughts looking down at her newborn and two-year old sons when she was first diagnosed was, “Oh my gosh, who is going to teach these boys to throw a ball? That was one of my main concerns, I had to be here for that.”

Just within the last few weeks, Abbey started pitching to her younger son, now three years old. He nailed it. Every night she now kisses him on the head and says, “Goodnight, sweet angel” because he arrived a month early to tell her something was wrong. And now here they are years later, playing softball together against all odds.

Abbey has hoped for the best and expected the worst, but she is ecstatic to take this small piece of her life planning as a success.