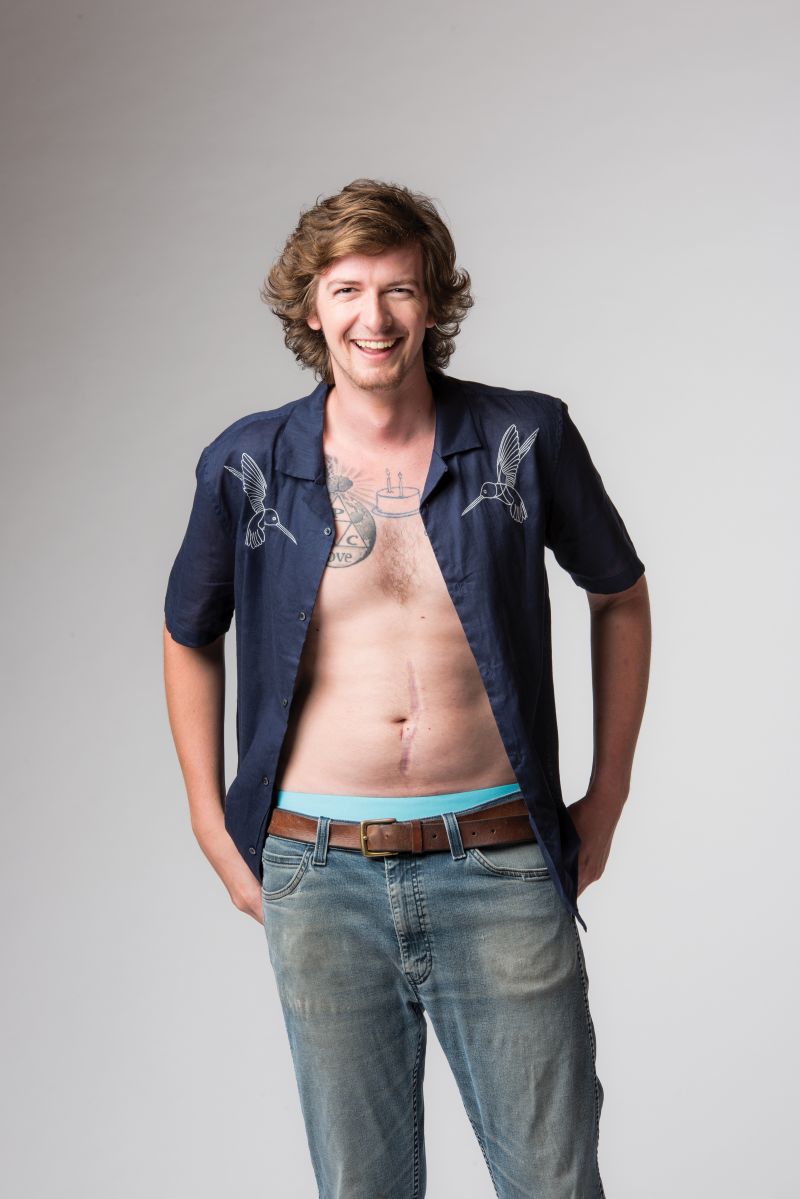 “Get checked. Catch it early and move on. I’m your poster boy.” That’s how Wint pointedly summed up his story at “Colon Camp,” The Colon Club’s annual survivor retreat. One night each year during camp, staff and models go around the room after dinner and tell their cancer stories. For most, being surrounded by so many fellow travelers, it is the first time they really open up about their stories. The tales are raw and cathartic, and storytelling often goes deep into the night.

In most years, the mix of stories is balanced across stages I through IV. But this year, perhaps reflecting recent studies reporting a rise in the incidence of colorectal cancer in young people, more stage IV stories were told than ever before. These stories took some time to tell, and when it came to Wint, people were expecting another lengthy story. But Wint’s short, stark opening got the room’s attention.

Wint is right; he is an On the Rise poster boy. Having been diagnosed with stage II colorectal cancer at the age of 21, he is the very definition of “early onset.” It would be wonderful to say that because of the outreach efforts of The Colon Club and its partners, Wint demanded a colonoscopy when he went to the emergency room with debilitating cramps and constipation. But that wasn’t the case. Wint was ultimately diagnosed by doctors who, to their credit, gave him a colonoscopy as a matter of course after ruling out just about everything else.

The news was a complete shock. Wint was healthy and active and had no family history. Genetic testing failed to reveal any predisposition for colorectal cancer. As Wint puts it, “It was just really bizarre luck.” Some luck.

Before cancer, Wint was a bit adrift. The summer after high school, he left his home of Macon, Georgia, to have some adventures out west. In Seattle, he lived the life of a busker, playing guitar for the Pike Place Market crowds. He worked various odd jobs in Wyoming. In California, he had the most audacious adventure of all, skateboarding the length of California State Route 1, bombing in and out of traffic on his longboard at 50 miles per hour when conditions allowed.

At the urging of his family, Wint eventually returned home and started pursuing an environmental engineering degree at Mercer University until he was diagnosed in August 2016. His treatment consisted of a colon resection and half-a-year of chemotherapy. Despite it feeling like “a six-month hangover,” he found treatment to be an enlightening experience. Wint would pass his time during infusion sessions by playing guitar and singing for his infusion brethren, who were all at least twice his age. Sometimes he just talked and soaked up their wisdom. He gained perspective by watching how those who were worse off than him dealt with their situation. He saw how the fighters did better than those who were only negative and angry about having cancer. He learned about work ethic. He toughened up a bit. He matured and got himself geared up to complete his degree.

Wint finished treatment in March 2017, and with his most recent scans show him as “NED,” he is moving on with his life. Wint is a creative type and he just wants to build things with his hands. He has charted himself a new course and has traded his engineering studies for a welding program at the local community college. But it is in pizza where he will make his career. His plan is to work as a welder at shipyards up and down the east coast until he has saved enough money to open his own pizza joint. Not just any pizza place mind you, but a place where art is welcomed and cultivated, a place where people feel a sense of community, a place that gives people an outlet for expression. And, of course, a place to enjoy delicious pizza.

So, Wint is getting on with life. Doctors caught his cancer early, treated it, and Wint is putting cancer in the rear view window. When he reaches the recommended screening age of 50, he will have put more than half of his life between him and cancer. And if he hears anyone else complain about colorectal cancer symptoms along the way, he will be there to tell them to get screened, because it can happen to anyone at any time. He’ll be able to say, “I should know. I’m the poster boy.”