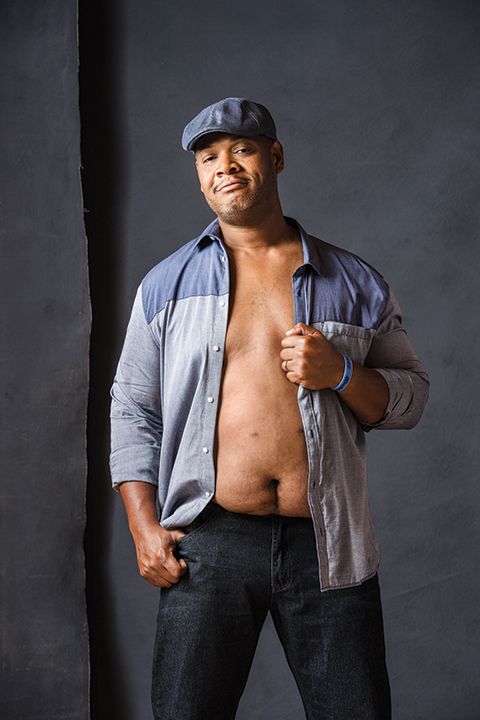 Towering at over six feet tall, Walter Hickman, Jr. cuts an imposing figure. When he folds his arms across his chest and gives you a stoic look, you feel like the kid who’s been sent to the principal to confess. He can’t hold that pose for long, though, before breaking out into a huge grin — and that’s the real Walter, the one that so many people know and love. That smile, and the infectious positivity that accompanies it, is a key ingredient to Walter’s success in dealing with colorectal cancer.

In early February 2013, Walter was newly married and enjoying life. He and his wife were participating in their church’s Daniel Fast, a plant-based diet in which people eat mainly vegetables and fruits and drink only water. Nearing the end of the three weeks of this diet, Walter began having what he thought were gas pains since over-the-counter medications were giving him some pain relief. Walter pressed on, and the day after the fast was over, he and his wife celebrated with dinner at a favorite seafood restaurant. It was a memorable meal, but not for the reasons they had planned —Walter started experiencing severe abdominal pain before they were even finished eating.

None of Walter’s attempts to treat his symptoms brought him any real relief. Finding he was in constant severe pain, he and his wife went to the emergency room, fully expecting that the tests and CT scans would reveal an extreme case of constipation.

When the young doctor returned from reading the CT results, the situation turned grim; the doctor, solemn and glassy-eyed, told Walter that he had a mass on his colon, which she believed was cancer, and that he needed to be admitted to the hospital for further testing and probably surgery. Ever the optimist, Walter touched the doctor’s arm, smiled, and said, “It’s going to be all right.”

Walter calls this his “fork in the road” moment. Leaning on his strong faith, he says, “I could either blame God for this mess I was in or praise Him. I knew that I could do nothing at that point and God had the power to do it all.” After an exploratory surgery, doctors found what they thought was a grapefruit-sized mass. Biopsy results were inconclusive. The tumor was closing off passage of anything through Walter’s colon, resulting in another surgery to place stents in his colon to keep it open. Walter woke from his next surgery to learn the mass that started out the size of a grapefruit, had shrunk to the size of an egg. This meant the doctors were able to remove 12 inches of colon and 13 lymph nodes  laparoscopically, avoiding a six-month recovery. Walter’s response, with that big smile of his, was “Praise God!”

Recovery from surgery and the ensuing chemotherapy was relatively uneventful, until the day Walter saw an older gentleman in the chemotherapy room with him. The man, noticing that he and Walter had the same chemotherapy cocktail, asked Walter what stage his colon cancer was. Walter replied that it was stage II. The man replied, “At least they caught it when you’re young — I’ll have an ostomy the rest of my life.”  Another “fork in the road” moment for Walter, when positivity won out over doubt and pessimism. Walter says he realized: “I have a colon, my chemo is only every 2 weeks, all side effects are manageable, and most importantly, I was already completely healed!”

Walter credits his wife for his success; he gets tears in his eyes when he mentions how important her support was and is to him. During his three weeks in the hospital, she left his side for a total of three hours. He said her presence helped as much with his healing as anything else. She pushed him to complete chemotherapy when doubt had him reconsidering. She helped him realize that his situation was not as dire as that of others, and she gave him something to look forward to once his ordeal was complete.

Walter realizes that colorectal cancer has given him the opportunity to serve and to educate others about how preventable, treatable and beatable this disease truly is, and he has recommitted to staying active in the community and with his family. He’ll need to maintain that active lifestyle — perhaps Walter’s favorite post-cancer event was the birth of his child last October. Talk about a happy ending to a cancer story!