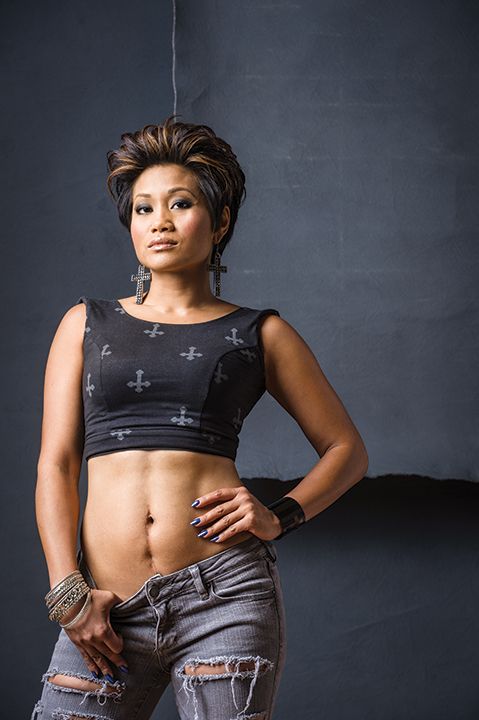 As Vannora Hawkins walks across the room, an aura of strength and beauty surrounds her. Born in a refugee camp in Thailand, after her mother walked from Laos to Thailand with an infant in her arms and a toddler on her back to find her husband, one might say Vannora was a born survivor. At 25, this professional hair stylist, wife, and mother of her two would learn to rely on that innate survival instinct.

Like many young women, Vannora’s first response to abdominal pain was to call her gynecologist. When Vannora’s exam came back normal, she was sent for an x-ray of her abdomen, which showed a possible abscess on her appendix. Several months and multiple antibiotics later, Vannora was now vomiting, having diarrhea and doubled over in pain. A trip to the emergency room revealed that the “abscess” on her appendix had doubled in size. She was prepped and ready for an appendectomy, but one last CT scan changed the course of surgery moments before it began.

“I was horrified when the surgical nurse wheeled me out of the room and informed me that this was not appendicitis,” Vannora said.

That CT scan revealed the pain, vomiting, and diarrhea were not caused by an abscess on the appendix, but rather by a tumor in her colon. With her mother by her side, doctors told Vannora that not only did she have a tumor in her colon, but it had already spread and she was now a stage IV cancer patient. She says, “Cancer just wasn’t in our vocabulary. We didn’t even know the severity of stage IV until the doctor explained it.”

One surgery, nine days in the hospital, several feet of both small and large bowel removed, 27 lymph nodes harvested and a diagnosis of stage IV colon cancer, are not an appendectomy. After being misdiagnosed for so long, Vannora sought a second opinion from Johns Hopkins before proceeding with six months of chemotherapy. She started the FOLFOX regimen, but soon developed an allergic reaction and had to be put on the Avastin and FOLFIRI cocktail.

Side effects and allergic reactions made life physically difficult, but Vannora felt prepared for hair loss. In her day job, she is a very talented hair stylist, and though hair loss was the least of her concerns. First the thinning happened, and then it was clumps hitting the floor. Not able to look at it anymore, Vannora’s mother helped her shave it off completely. “I thought that would make me feel better, to just get it over with.” Watching her hair hit the floor, Vannora cried out as cancer suddenly became very real.

In true survivor style, Vannora quickly got herself the hottest wigs available, and nobody knew the difference. “As a hair stylist, I’m always changing my look, so no one even thought twice about it.” As Vannora became more brave and comfortable with the hair loss, a sleek bob wig became a favorite and became her signature haircut.

Eight months into treatment, with hair growing back and side effects dwindling, a CT scan revealed a tumor on her small intestine that was resting on her bladder. Vannora was looking forward to getting back to normal, but now she was facing five more months of chemo, another surgery, more side effects and more pain — both physical and emotional. Removing this tumor was complicated, and the surgeons had to scrape her bladder. Scraping the bladder meant having a catheter for two weeks, of which she says, “This was by far the most uncomfortable experience of my life.”

After a few weeks of recovery, Vannora heard the words she had been anxiously anticipating —cancer-free.

It’s been eight years, and Vannora is still a cancer-free, stage IV cancer survivor. There aren’t many moms in the carpool that have a story quite like Vannora’s. Her family is stronger because of this experience, and she laughs as she refers to them as “Team Hawkins.”

From the love story that survived a refugee camp in a war-torn country, to the bond that strengthened Vannora, her husband and their two daughters who now form “Team Hawkins,” it’s clear that this group of survivors is quite a special team.