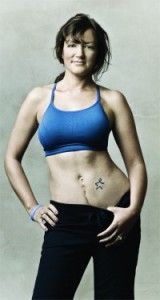 Trish Lannon woke up one morning with abdominal pain and a fever. After fainting twice, she finally went to the emergency room and was told that she was missing two-thirds of her blood. Trish was so anemic that nurses were surprised she could even walk in on her own.

Over the next twenty-four hours, she was given blood transfusions and had numerous tests and scans. Doctors saw a cyst on her ovary and something suspicious in her colon, and she was rushed into surgery. The cyst, an ovary and a fallopian tube were removed along with a large tumor and part of her colon. Trish was diagnosed with stage III colon cancer at 39.

While recovering from surgery, she began surfing the internet for information but found it overwhelming and confusing. Trish had never been involved with chat rooms before, but when she found The Colon Club and its message board, she no longer felt alone. After surgery and throughout chemotherapy, she visited the message board every day to read, ask questions and get support from others going through the same things she was going through.

Although she has completed treatment, Trish continues to frequent The Colon Club’s message board, but with a different perspective. As a survivor on a new journey, she hopes to help others wade through the sea of questions, just like she once did.

Trish’s story as told by Trish

I woke up the morning of March 3rd, 2007 feeling really horrible. I had a lot of pain in my lower right quadrant and a slight fever.  After fainting twice that day, my husband told me we should go to the emergency room – I, in my infinite wisdom, said no and that I was sure it was just gas and the stomach flu. Well, the next morning it was so bad, I thought it was my appendix and I finally agreed to go to the hospital.

As soon as we were called back to the emergency room, the nurses took one look at me and practically carried me into a room. I couldn’t figure out what all the fuss was. I remember hearing them say things like – she is so white…she looks terrible…get blood tests done on her and put her on an IV right away. My thoughts at the time were – Whoa! Hang on there everyone, don’t you know I am just having either serious gas pains or there is something wrong with my appendix?

When my first blood tests came back, my blood scores were so low they could not figure out how I had walked into the hospital.  I was missing 2/3 of my blood volume and was severely anemic. Over the next 24 hours, I ended up with a total of 5 blood transfusions to get my blood back to a safe level. In addition, they did 2 CT scans and 2 sonograms. Let me tell you – when you have a fever of 104 and your blood is crap these tests are difficult at best. I was shivering from the fever and crying from the pain and they wanted me to be still! I thought they were crazy.

A doctor came into my room and told me that they found a 4cm cyst on my right ovary and something troubling with my colon on the right side as well. I was told that they suspected Crohn’s disease. Jeez – what happened to the gas pain and appendix problem I was sure I had? He told me they would have to do surgery to remove my ovary/fallopian tube and cyst and possibly some of my colon, but they could not do surgery until my blood was better. I was checked into a room and after the 5th transfusion, they rushed me off to surgery…literally. I was talking to my family and all of a sudden, two people rushed into my room, mumbled something about my blood numbers finally being in the safe range, and they just started rolling my bed out. I have never been so scared.

My husband rushed to keep up with us. My one memory of being taken to surgery was the ride in the elevator. Here I am on my way to get a five-inch incision from my pubic area up to and around my belly button and all I could think of was, ‘Darn, I wish I had shaved my bikini area before we came to the hospital.’

Well, 4 hours later I was back in my room. I don’t remember it very well, but apparently I spent all day like the movie ‘Groundhog Day.’ I would have conversations and then fall asleep…only to wake up and have the same conversations with the same people over and over again.

Unbeknownst to me at the time, the surgeon had come out to my family and told them that they had to remove my ovary/cyst and fallopian tube on the right side as well as 6 inches of my colon and 15 lymph nodes. The surgeon was sure it was colon cancer, but needed to wait for the lab results for the stage level. He advised my family not to tell me until the lab results came back. Due to the amount of narcotics I was on, he felt that I would have to relive being told the news over and over again.  When my husband asked him what stage he thought it was, he was told it was probably stage II.

On Friday March 9th, I was finally told…I had colon cancer. They found a large tumor in my colon and 6 of the 15 lymph nodes they took were cancerous. However, they believed they surgically had removed all the cancer and it had not spread to any of my other organs. The surgeon first told me I was Stage II, but later when I met with my oncologist, I found out that was wrong and I was at Stage IIIC.  I will never forget laying there in the hospital bed in total shock.  My first thoughts went to my three kids and my husband.  I was scared for them and scared for me.  I spent the next three days in the hospital crying and depressed.  How could all this be happening to me?  How had I missed the signs?  I pondered all of the “what ifs” and was sure my life was over.

When I got home, the first week was really rough, both emotionally and physically.  The Internet didn’t help with this either – it can be a scary place to get information if you aren’t sure what you are looking for.  But then I found the Colon Club.  I have never really believed blogs or chat rooms were a good place to go, but this was different.  The four weeks I was at home I lived for the Colon Club, asking questions, reading posts, and making contacts.  I have learned so much from people I have never really met and felt more support from people I have never seen.

Six weeks after surgery I had a PET scan that showed I was clear of any cancer and my CEA was down to 3 from 154 before surgery.  I have gone through 12 rounds of Folfox4 and was pronounced NED (no evidence of disease).  Chemo wasn’t easy – it took me 9 months of treatment to get through what should have taken me 6 months, but my blood numbers struggled to bounce back.  When I turned 40, I was still in treatment and in no mood to celebrate, but my husband found a 5k family fun run/walk for colon cancer that was occurring on my birthday.  SO – that is how we celebrated it with family and friends.  What better way to ring in 40 than to do our part to raise money and awareness for colon cancer!  When I was 2 months out of treatment, my husband threw me a surprise “Chemo is Over” party complete with a Cat in the Hat cake from Ace of Cakes!  (You know – Duff from The Food Network!)  I have now begun a new journey.  I am getting used to the new me – the me that is a colon cancer SURVIVOR.  I am learning to live life for my family and myself – NOT for cancer.  Don’t get me wrong, I still think about cancer, but I am learning to not let it take over my thoughts or my life.  It has been very difficult to let go of the fear – they say the first year after chemo is over is the hardest, and they are right!  The Colon Club continues to be a huge part of my journey and support system.  My goal for this next year is to become involved in colon cancer awareness, volunteering for The Colon Club, and spreading the word about prevention!