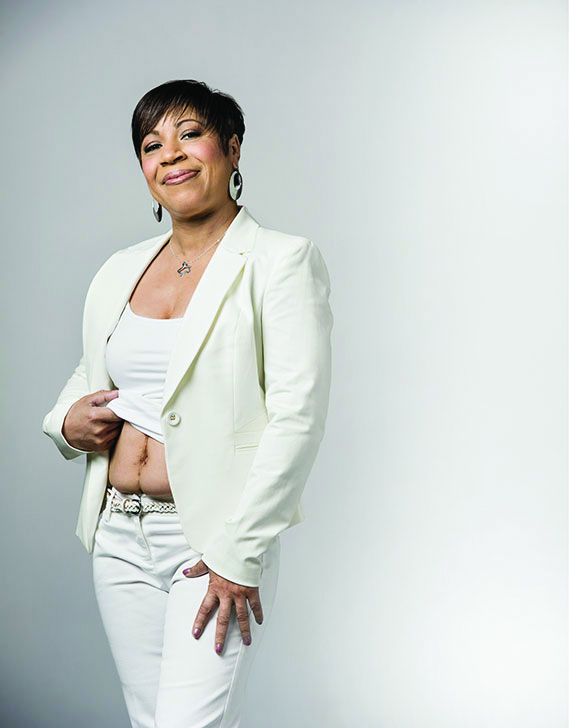 I started feeling “bad” in early 2010; slight abdominal pain and low blood count were my primary issues. I had a history of fibroids and cysts, so naturally my doctor along with me thought my issues were related to my gynecological problems. Fast forward to the summer of 2010, I started to lose weight significantly, the low blood count issue wasn’t resolved and I started to get really severe abdominal pain after I ate. I continued to see my GYN and PCP who both recommended a hysterectomy. My weight had gone from 135 down to 120. I remember telling my doctor that I was a black woman who was losing her butt. He had never had anyone describe anything to him like that, but was catching my point.

Fall 2010, I continued to lose weight and doctors were trying to get my blood count up without having to do a transfusion so I could have my hysterectomy. My PCP suggested I see a gastroenterologist. The gastro doctor, seeing that I had no family history of cancer, thought like the other doctors that I needed to have the hysterectomy. He said we could do a colonoscopy, but most likely my issues were due to the fibroids. Seeing no urgency and not even thinking cancer could be a possibility, I didn’t do the colonoscopy and continued with taking iron pills to get my blood count higher. My hysterectomy was scheduled for December.

December 2010, the abdominal pain began to be unbearable. I went to my primary doctor, who did a CAT scan. CAT scan showed a mass, but the radiologist thought it was constipation due to all of the iron pills I was taking. Finally, December 23, 2010 I couldn’t take the pain anymore and went to the ER. I was also down to 107 pounds. Another CAT scan was done, but this time another radiologist saw that something wasn’t right. I was immediately admitted and had surgery on December 26, with what I would soon learn was to remove part of my colon. I stayed in the hospital until January 2, still not knowing what caused the “mass”.

I followed up with my surgeon on January 4. I was sitting in his office and said to him, “What was it? What caused all of this?” He said to me, “Well, I’m going to need you to do chemo. It was cancer.” I was shocked! I had never considered or thought that I could have cancer. I remember writing in my journal that night, that it was literally the beginning of the first day of the rest of my life. I remember having a sense of peace and knowing that I was being prepared for this fight. I have a wonderful oncologist and treatment team. My family and friends who are also known as my “stalkers” have and continue to be my great support system. Chemo was pretty much uneventful except that we tried to make it a party or social setting every time I was there. I started on 2/9/11 and ended on 7/17/11. On 7/19 we had a family trip to the Bahamas to celebrate!

In March 2012, my follow-up PET scan revealed a “hot spot.” A lymph node under my collar bone needed a closer look. We did a biopsy and a removed the lymph node. I did another 6-month round of chemo from April to October 2012.  I may have to deal with recurrences in the lymph nodes, but I am a survivor because I decided to fight! This has been an experience! I am thankful for this journey because it’s taught me so much about myself. I’ve learned some lessons and I now know my purpose. I don’t know what the future holds, I know that I don’t have any control, but what I can do is live in the moment, enjoy life and help as many people as I can on the way.

UPDATE: We are sad to share that Tonya has passed away.