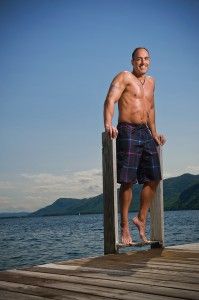 On the early morning of April 19th 2000, I watched my dad who was only 62 years old lose his battle to colon cancer shortly after being diagnosed and having surgery only 3 weeks prior to that day. Just days before he seemed totally fine and was living a normal life and then all of a sudden we were blindsided by this dreadful disease. I will never forget our family doctor, Dr. Ellis, who happened to be at the hospital shortly after my dad passed had told me that since colon cancer can run in the family that I should get a colonoscopy as soon as possible. I was 35 years old at that time and I worked out regularly and felt I was in really good health. I was still fairly young and felt pretty invincible and that there was no way I would ever get cancer. His advice to me went in one ear and right out the other. Two years later, my family and I would be blindsided by cancer again - this time it was me!

On February 26, 2002 I went to Dr. Ellis’ office for a routine physical. Little did he know or anyone else know I had been experiencing blood in my stool for about 5 months or so prior to that day. I was hoping and praying that it was just an ulcer or hemorrhoids but it was not going away and some days just seemed to get a little bit worse. I figured I would use a routine physical as an excuse to see him so that it wouldn’t alarm my family as if anything was wrong. During the exam I told him about the bleeding and he also saw it during some testing. Knowing about our family history, he scheduled me for a colonoscopy 3 days later. Since I could not drive myself to have this procedure done I had asked my mom to take me and I had assured her that this was just a check up that was recommended by the doctor and that nothing was going to be wrong. She felt relieved that after months of her begging me to have this done I was finally going to do it.

I will never forget the look on her face after I woke up in recovery. Not knowing what the result of the test was I could tell it was not good and that she was in shock. I had a golf ball sized tumor in my colon which was causing the bleeding and a biopsy was also done to determine if it was malignant. I was told by the doctor that the result of the biopsy would take up to 3 days and I was to call his office to get it. After 3 days had passed I was anxious but very hesitant to make the call since I was at work that day. The receptionist answered the phone and told me that the doctor would call me back in about an hour. As the time passed my phone finally rang and my heart just about jumped out of my chest when I saw his phone number on my caller ID. I answered the phone and the only thing I heard were the words “you have cancer”. My first thought that came to my head was my dad and that I was going to die soon.

The first phone call I made was to my mom and obviously since we were both stunned by the news we both began to cry. After we regained some composure she said “Tim, God is going to take care of you and you’re going to make it through this. You need to get back to Church and start praying again.” For years prior I had stopped going to Church not because I didn’t believe in God anymore but I felt that as long as I lived a pretty good life and didn’t break any of His commandments I would still be in good graces with Him. That was my sad philosophy on why I quit going.

Just one week after I received the call that I had cancer, I was in surgery to have 18 inches of my colon removed. After waking up still groggy in recovery, I asked my mom and sister how the surgery went. They both assured me that it went well but I could tell that they weren’t telling me everything. Early the next morning, the intern doctor who was in the operating room during my surgery told me that they found 2 surface spots on my liver and that they had removed them. This is what my family and I had feared the most that the cancer had started to spread to other organs. Now I knew why my mom and sister acted the way they did when I asked. I was diagnosed with stage four colon cancer.

Approximately 2 months after I got out of the hospital, I started on 4 cycles of follow up chemotherapy which consisted of two and a half hours of intravenous medicine. I would receive it on every Tuesday for four straight weeks and then I would have 1 week off and then start another cycle the following Tuesday for a total of 16 treatments. The side effects were pretty rugged as I experienced some nausea and extreme fatigue. I had gone through several grueling conditioning sessions for basketball in high school and college but this was nothing compared to how this chemo made me feel. It definitely beat the heck out of me!

After I had completed the chemo I was pretty much back to my normal life of getting back to work full time and back to the gym on a regular basis. Over the course of the next year and a half I had a series of follow up blood tests and MRI’s which were all excellent and as a result my oncologist had determined I was in remission. I felt like I was back to that invincible person I was before cancer. It wasn’t until I had another checkup MRI in May of 2004 that another spot was detected on my liver. To go from being in remission to hearing that your cancer had returned was devastating to me.

I met with my oncologist to see what my options were and he had recommended having surgery at the Cleveland Clinic since they had liver specialists there. A week later, I traveled up there to have a consultation with my surgeon to find out what all this would entail. At the time I was thinking that it would not be near as worse as my original surgery since I already had a large scar going straight down my midsection. I figured that since this was just another spot, they would probably make a small incision over my liver to remove it. To my surprise, my surgeon had told me that another big incision would be made this time across my midsection in kind of a rainbow shape and that he would be removing over a quarter of my liver. He also told me that this was a very serious surgery and that the 5 year survival rate was only 20 percent. When I started hearing all of this information, I just felt numb and I didn’t want to hear anymore. I just wanted to get this over with as soon as possible. On May 27th 2004 I had my surgery.

Spending ten days in the Cleveland Clinic was ten days of hell for me. I basically did not eat any solid food or drank any liquids for the entire time I was there other than having an IV in my arm. This was all in response to having part of my liver removed. Anytime they put food in front of me or something to drink, it just made me nauseated so I wouldn’t touch it. A few days after this surgery they were slowly taking me off of the pain medication and I felt like I was run over by a semi truck and couldn’t get out of bed. The doctor told me that I had to start getting on my feet again and walk down the hallway for exercise but I couldn’t do it by myself. My mom literally had to hold me up and I would barely make it for twenty feet before I wanted to stop. In order for me to be released from the hospital I had to come up with the energy to force myself to eat, drink and walk and since I wanted out of there so bad that’s what I did.

The post surgery experience for me was just as hard if not harder than the surgery. I had a port inserted into my chest for the new type of chemo that my oncologist was putting me on. I was put on a regimen that would consist of 4 cycles. Each cycle would start with 4 hours of in lab therapy followed by 2 more days of continuous chemo from my pump into my port. As each cycle went on, my side effects got worse. I experienced such things as being very sensitive to cold, hives across my face and body, extreme fatigue and nausea that was so bad I had to be rushed to the hospital and spent two days there recovering.

Although this follow up chemo was very brutal it has proved to be my saving grace as well as my renewed faith in God. The 2.5 year period that I battled cancer was by far my toughest challenge hands down! I will never forget the morning I went to the hospital to have the port removed from my chest it was the happiest day of my life! It gave me some closure to the most extreme journey I have had so far. To this day I have been cancer free for the last 7.5 years and have beaten some very high odds. There is not a day that goes by that I don’t ask God for a cure for cancer. I thank Him for every second that I am alive and healthy and I pray so hard for those that are going through what I went through that one day they will also receive the blessing of His loving and healthy hands. Thanks so much for reading my story and God Bless!