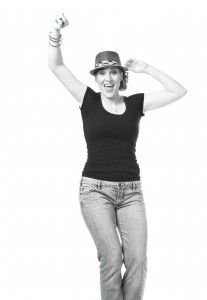 Cancer is ruthless enough, but having cancer in my 20’s was almost more confusing than the disease itself.  I was young, single, and living on my own when I was diagnosed with colon cancer at the age of 28.  Just when I thought I was getting life figured out it laughed in my face.

I worked out, ran marathons and ate healthy

I went through almost a year and a half with abdominal pain, misdiagnosis, several different medications, puzzled doctors, and a lot of frustration.  I considered myself a very healthy person.  I worked out on a regular basis, ran marathons and ate healthy.  But I still experienced frequent abdominal pain. I heard someone say once that pain is your body’s way of telling you something is wrong.  I knew this pain was not normal, but no one could figure out why. My doctor just thought the pain was something I would have to live with the rest of my life.  He mentioned that I was young, exercising, and eating right so there was no need to be alarmed – and especially do a colonoscopy. We put that procedure on the bottom of the list and he mentioned that if things got really bad, just to call him and make the appointment, but it wasn’t typical for him to do colonoscopies on someone so young.

I continued to live with the pain

So, I continued to live with the pain.  (Hind-sight 20/20 you always look at a situation and think of things that you could have done differently.)  I finally reached my level of frustration where I couldn’t take the pain anymore and called and made an appointment for a colonoscopy and EGD.  This procedure is something that most people act very strangely about, but it was the procedure that saved my life.

I remember the doctors and nurses chatting away about Angelina Jolie and Brad Pitt as I was being wheeled into the colonoscopy room. The world was moving at its normal pace, going through the customary motions.  I had no idea mine was getting ready to halt in its tracks.

I woke up from the anesthesia and the doctor started showing me pictures of my insides.  He explained the different parts that looked healthy, but then showed me a part that wasn’t healthy… this is cancer.  He went on to tell me that he was not able to look past the tumor and there is only a pen point-sized area that my digestion was able to go through. He then said he had no idea how I have been living this way and most people wouldn’t have been able to function at all with the type of pain it causes.

My doctor thanked me…

Unbelievably, I didn’t cry at first.  I felt so much relief.  Finally, it was validation that I wasn’t making up this pain, and now there is a concrete reason for it.  I wanted to know the next steps and timeline of things because I had a marathon coming up in San Francisco that I had already bought tickets for and I didn’t want to miss it.  I don’t know if it was because I was still drugged up or if my brain wasn’t really processing what was going on, but that was my first worry – not being able to run the marathon.  Looking back, I know it was complete silliness.

The doctor thanked me at the end of our unfortunate talk. He said I had taught him a lesson.  He typically did not do colonoscopies on people my age, but after my case, he said he would never again deny a colonoscopy to someone based on their age.

The next week I had surgery, a left hemi colectomy, to remove 12 inches of my colon.  I soon found out that I had stage II colon cancer, where 26 lymph nodes were clear.  They also removed a mysterious mass from my liver, but it ended up to be non-cancerous.

The days and weeks after my diagnosis and surgery were a whirlwind of doctor appointments, medical tests, telling people I had cancer, and a lot of private tears.  Sometimes I couldn’t stop crying and there were other times I wanted to cry and couldn’t.  I went through so many emotions over and over again in a weird cycle of the five stages of grief.  I was then left trying to comfort others and tell them that I will be OK, even when I wasn’t even sure myself.

This was my reality:  I was 28.  I had colon cancer.  Because I didn’t want to verbally drop the “cancer bomb” on one more person, I sent out a lot of text messages.  Another reality check of my age and the world we now live in.  I just wanted to get all this over with so I could move on.  At the time I didn’t realize how far away that “move on” stage really was.  It literally took years to physically and emotionally heal.

18 days after surgery, I walked the San Francisco half marathon

After surgery, the doctor had given me strict instructions to not run or put any stress on my abdomen.   He looked at me straight in my eyes and said, “Tia, the point is to keep you out of the hospital, not right back in here.” But, I had this little half marathon I still planned on running, well, walking at least.  So, eighteen days after surgery I walked the San Francisco half marathon.  Again, looking back, it was complete ridiculousness.  (I do not recommend it.)  But, I also learned from my cancer experience that each person does their very best to make it through a very dark place.  Even though some of my decisions did not make sense to others around me, it is what I needed to do to make it through a period in my life as gracefully as I knew how.

Within the next month, I had a port-o-cath surgically inserted and I started chemotherapy.  I had six months of chemo treatments.  It was the lowest six months of my life.  Because my life before cancer and chemotherapy was hanging out with friends, working out, and running I wanted to continue being as “normal” as possible.  So, I signed up for another half marathon and I trained around my chemo treatments.  I suffered, what I would call, severe neuropathy in my hands and feet, and to this day I have no idea how I was able to run as much as I did.  The whole cancer experience was like an out of body experience to me.  I watched myself go through the motions, but I was numb to it all.
Three days after my last chemo treatment I ran another half marathon.  (Again, I do not recommend it.)  Even though my treatments were done, I was just beginning the healing process.

To me, some of the hardest moments of having cancer came after all the treatments were over.  It was the emotional luggage that I had not been able to deal with and pushed it into the closet of my soul just so I could function through a day during cancer treatments.  I now had to get it out and start unpacking, facing what had just happened to me so I could emotionally deal with my post-cancer life.  Just when people were ready for me to move on, I was finally facing my cancer demons.

While trying to emotionally deal with the cancer, I tried to re-introduce myself to the social scene. Another part of being single and in your 20’s is balancing a social life and the aspect of dating.  That can be hard enough without cancer, but with cancer, it was a whole different story.  I dated a few times through treatment but was tired of telling people I had cancer or explaining the port-o-cath protruding through my shirt.  But, it wasn’t just that I had cancer, it was colon cancer, the un-sexiest type of cancer to talk about on a date.

I liked to call this conversation my “cancer bomb” and it was always such a weird confusing dialogue that I tried to avoid having at all costs.  I read a book that then explained that you should tell someone about your cancer journey on the third date.  Sounded good to me, so I tried this new dating with cancer procedure.

After a while, I decided that I was done dating and wanted to avoid the “cancer bomb” talk all together. My plan was to  focus on getting myself physically and emotionally healthy again.  Shortly after my profound decision to stop dating, I met an interesting guy.  We casually started hanging out from time to time and talking on the phone, but then the dreaded third date approached – the “cancer date.” So, we went out for the third time and I tried to casually slip in the conversation, “I had cancer and just finished chemotherapy.”  To my confusion, he acted completely fine and not bothered by it at all.  I decided I needed to keep this guy around.

Almost a month later, out of nowhere, it dawned on me… He googled me!  He already knew I had cancer.  During my cancer treatment the local news did a story on me about running a marathon while going through chemotherapy.  At the time, when you googled my name, the news story was the first thing to pop up.  He already knew I had cancer, probably way before my dreaded third date!

Nowadays, it makes me laugh.  I was so worried about something that he never thought twice about.  Almost two years later I married that guy and knew that I would never have to worry about dropping the cancer bomb on anyone else.

I did learn a few things going through colon cancer at such a young age.  I was forced to face my own mortality, when so many of my friends were living invincible lives.  During the whole process I thought that everyone around me was getting married and having babies; and here I was going to chemo treatments feeling very alone.  But, even in the darkest moment, I knew that Jesus was with me and the prayers of others were carrying me along.

Cancer took the trivial things in my life and made me focus on what mattered the most.  I now live my life with more gratitude.  I definitely appreciate having my husband around and know that whatever else surprises me in life, I won’t have to go through it unaccompanied; he will be holding my hand the whole way.