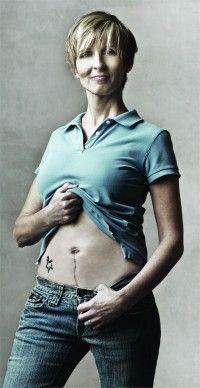 I am a 45 year old secondary school teacher who teaches some really amazing classes and students.  I teach costume/makeup I, stagecraft I, and drama I.  So I am very busy, but one day in October my life came to a complete stop and things changed.  I’m not really sure why I asked the doctor for a colonoscopy, but I did.  I mean my mom had had polyps removed a few times, but it never seemed to cause me to think about me getting them until that day.  I had been having some bowel problems, but I just chalked it up to stress.  I had been under a lot of stress over my job.  My mom had a colon resection many years earlier for diverticulitis, but I had never worried before.  Why did I feel I should be tested now, I mean I am only 45!

My husband on the other hand had a grandmother who died of colon cancer so he had a colonoscopy in April.  His tests turned out fine.  No problems with polyps or cancer.  What wonderful news!

Looking back I definitely had symptoms of colon cancer, but at the time, I thought stress, something I ate, or just life, were the reasons for these symptoms. The symptoms I had were some diarrhea, constipation and the occasional narrow stool.  But I kept putting off going to the doctor until I needed to get a physical.  At my visit, I told my doctor my symptoms and my family history.  He said he wanted me to have a colonoscopy just to be sure.

On October 1, 2007, I went for my test.  My husband and I were not prepared for the news the doctor gave us.  “Your wife has colon cancer and I want to schedule her to see a surgeon because they will have to remove part of her colon”, he said.  We were in a complete fog of shock!  He told us he would be sending off the biopsies and those results would be back in a few days.  All we really remember that day are the words, “You have cancer,” ringing in our ears.

The rest of the day we spent talking about how we would tell our 23-year-old daughter (who was in another state in school) and our 16-year-old son, that I had colon cancer.  It was one of the toughest things we have had to do.  Our daughter took it really hard and it was hard to stay strong as she cried on the phone.  She was scared, felt helpless, but most of all she was afraid she was going to lose her mother.  Ironically, my daughter had a colonoscopy scheduled that next Monday because she had been having problems for a while.  The doctor found a 2cm polyp and removed it.  He said everything else was fine.  She would need to be checked again in three years. Thank God it wasn’t cancer and they got it before it developed into cancer.

In telling our son, it was a little different. After we told him, he just looked at us and said, “Mom, Dad we will get through this.  Everything happens for a reason and God will get us through this.”  Well…..out of the mouths of children is sometimes where our greatest strength lies.  He gave our family strength.  I think he felt he had to be strong and really wasn’t sure how to take in this very shocking news.  God gave him the peace to share it with us.

After being told I had cancer my husband (who is a Little Rock Firefighter) told his company.  One of his good friends, Bernie Sherwood, talked to him about how he lost his 27-year-old daughter, Amanda, to colon cancer.  He told him to go www.colonclub.com and talk to others and get information.  Bernie also gave him a Colondar to give me for support.  Thanks to Bernie and The Colon Club, Scott and I were able to get many questions answer over the course of my illness.

During my surgery they took 6” of my colon and 11 lymph nodes.  The results of the pathology report showed no penetration of the colon wall and the lymph nodes were clear.  The prognosis was no further treatment, but the oncologist will do blood work and scans every four months as a follow-up.  Also, I will receive colonoscopies every six months to a year.  What a blessing!

Since my diagnosis, I have been very proactive in spreading the word about colon cancer.  Many of my friends have had colonoscopies after talking to me and reading the stories from the Colondar.  They too had been having symptoms but kept putting off going to the doctor.  Their results were good and they were so glad they went.  I have also started a group on Facebook called Colorectal Cancer – Keep Your Rear In The Clear.  The site has information about symptoms of colon cancer and a link to The Colon Club.  I have told everyone I know to join and help spread the word about colon cancer.  I have even made a pact for the number of people who join – 1000 people join and I will ride my bike to school (18 miles), 2000 and I will get the colon cancer logo tattooed on my body, if it doesn’t reach 3000 by the end of the 2008/09 school year, I will shave my head in support of those who are fighting colon cancer and to honor those who lost the fight, when the membership reaches 4000, I will skydive.  I am determined to spread the word and help save lives.  I believe another way I can do this is by using my body as a 2009 Colondar model to say, “If you are diagnosed with colon cancer, you are not alone.  We are here for you and we are survivors.”