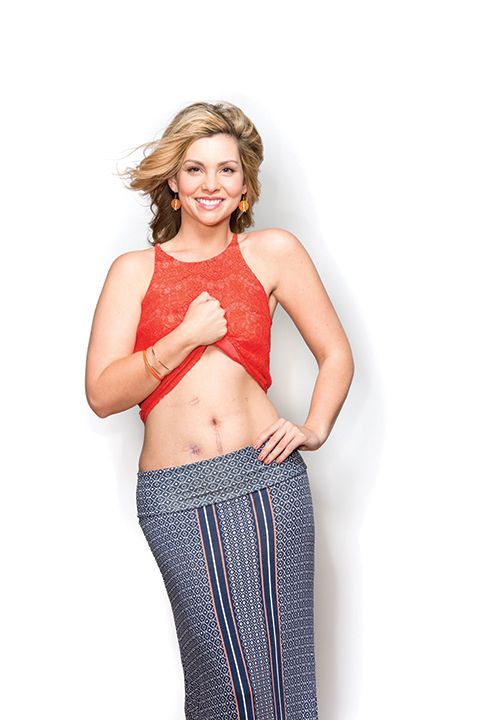 At first glance, Taylor Overby looks more like Miss America than a colorectal cancer survivor. If you showed her photo to a hundred people and asked which of the two she was, 100% would say without pause, “Miss America.” No one in their right mind would guess “colorectal cancer survivor.” Given she was diagnosed with stage IIIC colon cancer at the young age of 21, it would have made more sense to see her walking down a runway than down a hallway to receive surgery or chemotherapy. But things are not always as they appear. In addition to Taylor being so very beautiful on the outside, you would expect she might have a big ego on the inside to match, but quite the opposite is true. You won’t meet a sweeter or kinder girl ever. Unfortunately, neither beauty nor sweetness protects anyone from colorectal cancer. If it did, Taylor’s cancer story would have never happened.

It was summertime and Taylor was getting ready for her senior year at Florida State University, where she was majoring in HR Management. She remembers going out to eat that summer and having a terrible pain in her side that lasted about an hour and then went away. She didn’t give it much thought.

Taylor returned to school and would experience those same pains off and on at random times, but they would always go away and she would be fine. Fall was quickly approaching, which was Taylor’s favorite time of year. She is a devoted FSU football fan and would attend every home game she could. Just before Thanksgiving break, she began to have severe stomach pains and vomiting. Before returning to her hometown of Jacksonville, she went to a walk-in clinic and was told by the doctor that she probably had food poisoning. They sent her on her way and told her she’d feel better in a few days. She spent the Thanksgiving holiday in bed, but seemed to be feeling better by the time she returned to school.

Taylor was preparing for finals at school the following week, when she experienced a terrible shooting pain along with continuous vomiting. It speaks volumes that she even missed an FSU home football game, a game she already had tickets for. When she couldn’t get herself to work for the second day in a row, she decided to go to the ER. After she told them about her food poisoning diagnosis, they decided to give her fluids and antibiotics. The next day she was feeling worse and still vomiting, so she went back to the ER for a second time. The doctor ordered a CT scan to see what was going on, which was admirable on his part. What wasn’t very admirable was that he dropped the colorectal cancer diagnosis on Taylor like a bomb, with zero sensitivity. She was a scared, 21-year-old kid, who was in the ER with her two sorority sisters, not her parents. The same doctor proceeded to tell her that his girlfriend died of cancer when she was 21. Taylor still rightfully gets upset when she talks about the whole experience. Thankfully the rest of her treatment would be handled elsewhere and her loving family would be close by.

There were several surgeries and obstacles to deal with over the next couple of months, and Taylor returned to her parent’s home in Jacksonville in January 2014. She was going to start chemotherapy there soon, but was determined to return to school in Tallahassee, finish her last semester of her senior year and keep things as normal as possible. She started her first round of 12 chemotherapy treatments (FOLFOX) just before her 22nd birthday. Her mom drove her twice a week to Tallahassee to attend class and waited for her there. A true labor of love given it was a two-and-a-half hour drive each way. Taylor’s strong determination showed as she powered through and finished her classes, graduating in May while she was still in treatment. She even participated in the graduation ceremony with her friends, which was very important to her. Chemotherapy was completed that August and she had her ileostomy reversed in September. Life was thankfully returning to normal for Taylor.

Taylor is currently attending Graduate School at the University of North Florida. So don’t make any mistakes about this “beauty queen.” She is smart, determined and can accomplish anything she puts her mind to. Cancer has taught her to be strong and has given her the courage to know she can accomplish anything.