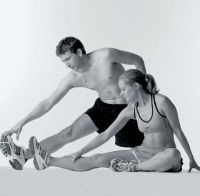 Sonja Lee is both athletic and in tune with her body, so without a small twist of fate, she would not have been diagnosed with colorectal cancer so quickly.

If her mom hadn’t been going through chemotherapy for colon cancer, Sonja, a 2nd degree black belt in Taekwondo, might not have paid attention to the blood in her stool. Instead, she went to the doctor without even telling her family and was quickly given a colonoscopy. When her doctor discovered two polyps, one of which was cancerous, Sonja was diagnosed with stage I colon cancer.

Sonja knows the importance of exercise and has continued her active lifestyle since being diagnosed, but she knows that sometimes it can take a bit of luck to keep things on track.

SONJA’S STORY AS TOLD BY SONJA:

My story is not that long. My mom was diagnosed with colon cancer in the spring of 2000, right before she turned 53. It had spread to her lymph nodes, and she needed surgery. They ended up removing three feet of her colon. That fall, while my mom was still going through chemo, I noticed blood in my stool. When I saw the bleeding, I knew it was a symptom. I knew that it could be cancer, but I didn’t really think it would be because I was so young. I had no idea that people my age could get colon cancer. I had just turned 26 in October.

It took me a little while to work up the nerve to make an appointment with a doctor (I also waited for the insurance from my new job to kick in).  When I finally got to the doctor, I was ten minutes late for my appointment, so they wouldn’t let me see him. They told me to go to the urgent care center, and the doctor there said it was probably nothing. He told me to do an FOBT (fecal occult blood test); so I did that and took it in to my doctor. Nothing showed up. I said, “Look, I’ve seen the blood. I don’t need a card to tell me that it’s there.” He knew my family history, and even though he didn’t say anything about cancer, I knew he was concerned because he recommended a colonoscopy. I wasn’t afraid of what they would find (I was sure it was nothing); I was just a little leery of the colonoscopy itself.

In December, when I went in for the colonoscopy, they found two polyps. Afterward, the doctor said, “Don’t worry. I’m sure it’s nothing. I’ll just send you a letter when we get the biopsy back saying it’s fine. If we do find something, I’ll call, but don’t worry.” A couple of weeks later, at about 10:00 on a Friday night, I came home to a message from him on my answering machine.

Because he had already told me that he was only going to call if it was cancer, I was pretty irritated. I didn’t want to have to wait until Monday morning to talk to him. I called the answering service hoping that somehow I would be able to get a hold of him. Although he wasn’t the doctor on duty, I persuaded the service to call him, and he was kind enough to call me back that night. He said that one of the polyps was cancer, but the biopsies from the area around it were okay. I had stage I colon cancer. Fortunately, all of it had already been removed, so I didn’t need chemo.  He told me how lucky I was that I had a symptom.

I waited until the next day to call my parents. For me, making that call was almost worse than the cancer itself. I hadn’t told anyone in my family about the colonoscopy, or even the blood in my stool, because my mom is a worrier. I didn’t want her to worry, and I knew that she would – especially because of what she had gone through. She’s not a very outwardly emotional person, so she might not talk about it, but she worries like crazy. I remember when I did tell her, she just kept saying over and over, “You’re too young, you’re too young.” Even though I was telling her it was removed and that it hadn’t spread, I think she was imagining that I would have to go through what she was going through. I was glad that I had waited because I could tell her that the cancer was removed and gone. If I had told her before, I think she would have flipped out.

I also had to call my siblings – my brother, who is five years older than me; my twin sisters, who are four years older than me; and my other sister, who is two years older than me. My brother and one of my sisters both live a few blocks away from me, and they came over right away. My brother brought bagels, and my sister tried to get me to come to her house so that I wouldn’t be alone. It was nice to know they cared – and to be honest, nice to have some bagels – but telling my family had been the hardest part. With that out of the way, I felt ok and just wanted things to be normal.

I had to go back three months later and have a sigmoidoscopy. It was the worst experience of my life. They inflate your colon, and you’re awake for all of it. It was miserable. I don’t think I even noticed the scope going in because it was already so painful from the air they pump into you. The nurse in the room only had one job – to rub my shoulder and tell me it was going to be okay. Normally, I would have considered punching her out. I would be really annoyed with this person I didn’t know rubbing my shoulder, but the pain was so bad that I didn’t even care.

During the sigmoidoscopy, they biopsied the same area again, but this time they found nothing. I had to go back a year after that and have another colonoscopy, and now I go every two years. Since then I have had two more colonoscopies that have found no abnormalities – hooray!

My mom is doing great now. She is at the doctor all the time, always doing some sort of test, but she hasn’t had any spread, and the cancer hasn’t returned. My family has all had colonoscopies. My brother’s have been fine, but all three of my sisters have had non-cancerous polyps. One of my sisters had to really fight her insurance company to approve coverage for her colonoscopy, even after she told them she had a 26 year-old sister who had cancer. She fought for several months and finally got one – and she had a polyp.

My mom has five living siblings, and none of them have had any polyps. We have not talked about getting tested for HNPCC (Hereditary NonPolyposis Colorectal Cancer) or anything genetic, but I feel that it has to be genetic. I’m a healthy person otherwise, and I don’t do any of the things associated with colon cancer; I exercise, I eat well and I don’t smoke. With my mom, my three sisters, and me, I know it’s genetic. We go for colonoscopies all the time and we talk about it; it’s a big topic of conversation in our family. We joke that my nephews are getting colonoscopies for their 5th birthdays. If I have kids, which I hope to one day, they will be getting tested as soon as their doctor will allow it. I feel like there’s no shame in it, no reason not to tell them.

In a way, I’m thankful for my experience. Because my polyp was cancerous, my doctors and I have been more vigilant with my health. I’m being checked so often that if the cancer returns, I feel confident that it will be caught early. A part of me is also thankful for my mom’s cancer. If it weren’t for her, I wouldn’t have gone to the doctor. I would have ignored the symptom, and it would have developed to a stage that is not as easy to treat. Believe it or not, I’m looking forward to a long life full of colonoscopies!