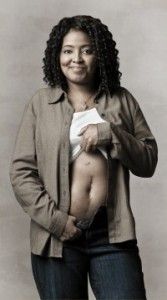 The nagging lower backache I’d been dealing with for several weeks was really getting my attention on St. Patrick’s Day, 2004.  Before getting in the shower that morning, I sat down on the toilet and knew I had a problem when blood began pouring out of my rectum.

I immediately called work and told my boss I’d be making a detour at the doctor’s office.  Once there, she did a preliminary exam and checked my blood pressure.  It had dropped so low from the blood loss that I was sent directly to the Emergency Room for further evaluation and monitoring.  There it was determined that I needed to see a gastroenterologist as soon as possible.  An appointment was made, and after a consultation, she scheduled me for a colonoscopy.  At that time, I was only given a mild sedative (thankfully now they put me to sleep), and was able to see the images on the camera as the procedure was taking place.  When the doctor located the tumor I asked, “What is that?  It looks like a bleeding brain!”  Needless to say, it was the cancerous tumor.  I couldn’t believe it.  Here I was at 36 with colon cancer.  I always thought it was on “old person’s disease.

A few days after the colonoscopy, I entered Southern Regional Medical Center in Riverdale, GA for my colon resection on April 16, 2004.  The surgery went well, but it was determined that my cancer was Stage IIIB, and I knew then I was in for the fight of my life.

One month later, I had my first chemo treatment, just two weeks after getting an infuse-port implanted in my chest above the right breast.  I had to receive treatments every two weeks and it consisted of 5FU, Leucovorin and Oxaliplatin.  As the therapy went along, I developed terrible neuropathy, and by the time I was near my last few sessions of chemo, I could barely stand up or keep from falling because my feet would go completely numb.  I also missed an entire month of chemo because I was on a clinical trial, and my counts were too low to continue at one point.  Getting the Oxaliplatin was really hard, especially since most of my treatments were in the late spring and summer months.  I’d crave a glass of cold water, but the sensitivity to cold caused by the drug made it feel like thousands of needles were pricking me if I attempted to drink anything chilled or with ice in it.  I also suffered from unbearable fatigue that sleeping did nothing to relieve.  After my last treatment in November of 2004 I thought I’d beaten the cancer and was on my way to resuming my normal life, which included flight lessons.  I returned to work in February of 2005 and was sailing along just fine until a routine PET scan in September of that year revealed my worst fear.

My oncologist broke the news to me that she was referring me to a cardio-thoracic surgeon because my scan unveiled that the cancer had metastasized to my left lung.  A few days later, I met the surgeon who indeed confirmed the results of the scan.  I would now have to undergo a thoracotomy, one of the most painful surgeries one can endure.  And although I was warned of this, I still was not prepared for pain of this magnitude.  Preparation for this surgery was intense.  It involved an EKG, stress and breathing tests. The surgery took place at Emory-Crawford Long Hospital in downtown Atlanta, GA on October 14, 2005.

Again, one month after the procedure, it was back to the oncologist for another round of chemotherapy.  This time CPT-11 (Camptosar) was given in place of the Oxaliplatin, and Avastin was also added.  Amazingly, during my first round of chemo, my hair actually GREW, not so the second time around.  Not only did I lose my hair, but I’d never been so sick in my life.  Even the new anti-nausea drug Emend wasn’t much help.  Determined to make the best of the situation, I began coloring pictures for all the other patients at the office who were getting chemo, and soon there was an ‘Artwork by Shaye” wall there.  It was therapeutic for me to do something to help the other patients get through their treatments.  I’d also bring “Chemo Puppy” along to help cheer up others as well.  He is a stuffed animal with a huge bandage on his stomach that the staff at my colon surgeon’s office gave me.

Believe it or not, when I go in for port flushes and routine visits now, patients and staff still ask me about him!  The second round of chemo was soooo hard.  I grieved the loss of my hair, my weight ballooned because I retained fluid, I looked like I’d been baked in an oven, and oh yeah, did I mention I was sick as a dog? I developed all sorts of other health issues as well, that were caused by the strong chemo – dental issues, kidney stones, and a shot gallbladder, which had to be removed, just to name a few.  There were days that I really saw no point in continuing to live and prayed that God would just call me on home.  Fortunately, I got through those dark days. I am blessed to have a wonderful support system to include my family, friends, co-workers, church members and fellow cancer survivors.  My Mom has been with my every step of the way, and she suffered right along with me, with the exception of the physical pain.  She often calls me a little trooper, but I think she’s one too!

Joyfully, I completed my second round of chemotherapy in April of 2006 and a few months later, after getting some of my strength back, a dear friend of mine hosted a “Completion of Chemo” party for me at his home.  It was a BLAST, and some say it was the party of all parties!

I now know I survived cancer to inspire and educate others.  In June of 2007 I launched my website, www.proud-survivor.com as an on-line resource for cancer survivors, their family and friends.  If I had to say just one thing about colon cancer, and believe me I could say PLENTY, the one thing I always say is that it is SURVIVABLE!  Hey, just look at me.  I celebrated my 41st birthday in 2008 and I’m still cancer-free.  And just to think, doctors told me I’d never make it this far.