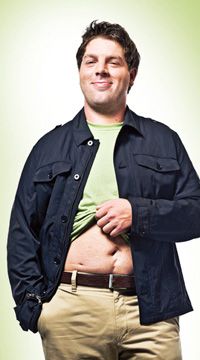 It all started when I took a spring break trip to Panama City Beach, Florida in 2004, my senior year of high school. I finished riding the go carts and proceeded to walk away when I became engulfed in questions of what was all over the back of my pants. “I don’t know, maybe I sat in some liquid and didn’t notice,” I replied. Then I rushed to the bathroom due to a sudden urge, and I passed what seemed to be nothing but blood. I knew something was wrong. At the consent of my parents, I called for an ambulance and was rushed to the ER, only to be told that I had a fissure. Somehow this fissure had emitted more blood out of my body than I had ever seen for myself.

Feeling that the doctor on call that night provided us with an obscure diagnosis, we went home the next day to see our family doctor, Dr. George Shannon. He decided it would be best to perform a sigmoidoscopy and see if there was anything to be seen. Based off what I believe was just intuition he sent me for a colonoscopy, which was done by Dr. Richard Robbins, post sigmoidoscopy. Upon performing the colonoscopy, they indeed found a tumor. Test results of the biopsy came back as malignant. I was diagnosed with stage 3 colon cancer.  Off to surgery I went, several days later.  Dr. Bill Taylor removed the sigmoid portion of my colon.

Upon recovery, I see my new doctor, my oncologist, Dr. Andrew Pippas. He speaks to me of the regimen of chemotherapy I am to receive. The regimen I was to follow was four hours every Thursday for six weeks and then two weeks off. All of which added to be 24 treatments in a six-month time frame. After the installation of my port, I took a trip with my church to Panama City, Florida and later that week met up with my family to stay for a few days at our condo. To make a long story short, I broke my port, and now needed a new one. The chemo took a tremendous toll on my day-to-day life due to my feeling very sick. When I did manage to get away, I was always inconvenienced by frequent bathroom trips, aches, or ailments of some sort. I would say I kept a good attitude through it all and made it through.

Post chemo, all my tests have come back with very good results. I did however run into a new cluster of problems. For the years to follow I was hospitalized at least once a year for two weeks with severe stomach pain. This severe stomach pain struck every year for five years, in an upwards of three times the last year. As a result, I no longer have my appendix, and my gallbladder and a foot of my small intestines were removed. Since the last surgery, early March 2009, I have had no problems and am happy to say that I have been cancer free for five years.