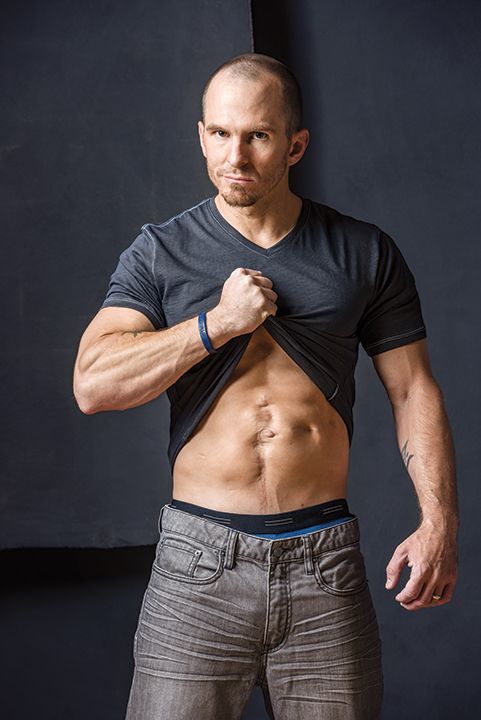 Scott Zilverberg was 30 years young and a bit of a fitness nut. His job as a mailman kept him active. He ate a healthy diet and loved spending hours at the gym. Scott didn’t give much thought to the blood in his stool until one day when he noticed a large splash of blood in the toilet. Scott’s doctor performed an initial exam and found no cause for the bleeding. Despite his young age, he was referred to a gastrointestinal (GI) doctor for a colonoscopy. “It’s probably nothing,” the doctor told Scott, “but it could be cancer.”

A few days later Scott found himself waking up from his colonoscopy, groggy from the anesthesia. He remembers the doctor’s words — “You have cancer” — and his wife, Michelle, who was by his side, completely falling apart. As the nurses consoled Michelle, Scott tried to clear his mind and absorb the news. The following day they met with an oncologist to discuss his diagnosis of stage III colorectal
cancer and the treatment plan. One of the administrative staff asked Scott if he had “sperm banked.” With little time to think, Scott and Michelle opted not to pursue this option.

Scott’s treatment plan was textbook — chemotherapy/radiation, surgery and more chemotherapy. It was summer, and Michelle, a teacher, was able to stay home and care for him during the days he felt the worst. Surgery went smoothly and the tumor was removed laparoscopically and no ostomy was required. Five days after leaving the hospital Scott began to experience excruciating abdominal pain and went back to the hospital in an ambulance.

A CT scan/labs discovered Scott had pancreatitis and he was admitted for a week. After being released and home for a week, he again had abdominal pain and vomiting. Michelle called 911 and Scott was rushed to the hospital in an ambulance. After additional scans and labs, a microscopic hole at his incision site was discovered and Scott was again re-admitted with emergency surgery scheduled for the next morning.

Awaking after three days in ICU Scott discovered that he had a temporary colostomy and an appendectomy. Scott spent 17 days in the hospital due to the pancreatitis/staph infection. He dropped from a healthy 168 pounds to 127. When he was released he could barely walk and chemotherapy was postponed for four months. Recovery was not quick or easy. He suffered two blockages, each of which required a week in the hospital. Eventually Scott regained his strength and was able to maintain a healthy enough weight to resume chemotherapy. He returned to work and the gym, but with winter now upon him, the cold sensitivity caused by the oxaliplatin was excruciating.

After he completed chemotherapy, Scott’s colostomy was surgically reversed. Shortly after surgery, he suffered another staph infection and Methicillin-Resistant Staphylococcus Aureus (MRSA) , though he was able to recover more quickly this time around. His fourth and final surgery was to repair an incisional hernia, which Scott describes as  “an alien popping out of my body.” Scott said this surgery was the easiest to recover from — only 11 days; but he took things very easy.

Scott has been cancer-free since his original surgery in 2008. He meets with his oncologist for annual check-ups and gets a colonoscopy every three years. His biggest challenge post-cancer has been managing his bowels, which is an ongoing struggle. Four years after his colostomy reversal, his colon is still working to find its new normal.

Scott places great emphasis on his physical fitness for helping him get through his cancer journey. His strict exercise program strengthened not just his body, but also his mind. When asked what role Michelle played, without hesitation Scott responds, “Everything.” It’s the only time during the interview that Scott’s demeanor waivers and tears fill his eyes. “She was there through it all. The surgeries, the recovery, she helped carry me, she helped me with my colostomy – everything.” When asked if cancer has made him a better person, he responds with an enthusiastic “Yes!” He is more determined than ever to be a better person physically and mentally. He is more humble, understanding and compassionate with others.

Unable to have biological children, Scott wants survivors to know that exploring fertility options prior to treatment is critical. Cancer needs immediate attention, but so does understanding the impact of cancer treatment on your fertility.

He hopes that by sharing his story in the Colondar he will inspire others. He hopes that others will listen to their body and if something feels wrong they will reach out to their doctors for answers. “It’s not just about you,” says Scott, “it’s about your family and friends who love you.”